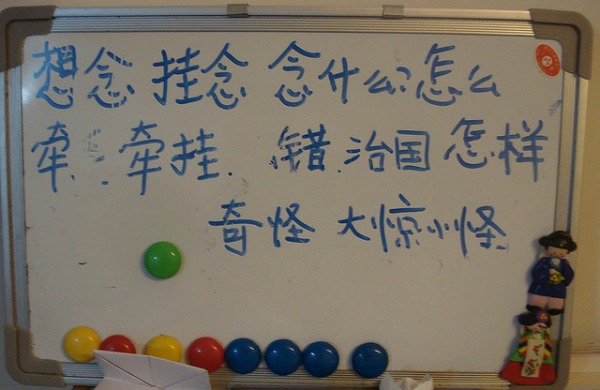 I heard this really interesting story on NPR the other day about Macon, Georgia public schools which are now becoming Mandarin immersion programs. While I thought this was a cool idea, I was shocked by some of the community reactions.

There was anxiety on the part of some parents due to the fact that the Chinese instructors were being funded by local nonprofits backed by the Chinese government. NPR reported that, “Some parents see a Communist regime enacting its geopolitical agenda on their children.”

At this point, I will admit I laughed out loud.

The idea that some political agenda is magically transmitted when a person learns a language is silly. But it’s not actually funny; it’s scary.

It’s unsettling to know that my fellow Americans are threatened by the idea of their children learning a language other than English. The level of xenophobia inherent in this attitude makes me mourn for the children of parents who fear non-English speakers and the cultures we represent.

One mother apparently didn’t see the point in teaching students a second language when the schools overall were struggling to meet standards. She remarked, “Do you want to teach them how to say, ‘Do you want fries with that?’ in Mandarin?”

Nowhere in the article did the writers mention the proven benefits of being bilingual. I can relate to parents who want the best education for their kids. It just so happens that one “best practice” is bilingual education. In fact, in many ways, it’s the gold standard. In many countries around the world, students routinely learn in dual languages. It is in the U.S. with our fear of cultural or political “infiltration” that our students miss out on the important opportunity to be fluent in more than one language.

Towards the end of the report, other parents were cited as expressing a desire for a  Spanish program instead of a Mandarin one, but if people are ruffled by the idea of a Chinese “agenda,” given the level of anti-immigrant sentiment present today, I can only imagine the fear that would be caused by any program funded by a Latin-American country in our schools.

There is an “opt-out” choice for parents in Macon, Georgia. Because it’s a free country, after all, that seems appropriate. I just hope they can explain to their kids why they chose to prevent them from learning one of the most useful languages on the planet.

Here’s hoping that parents in Macon, Georgia will pick up a copy of our own Bilingual is Better, so that they may better appreciate the opportunity being offered to their children.

Global Language Project: Empowering Students through Language
The Amazing Thing This Mom’s Doing to Make Sure Her Son Grows up Bilingual
5 Benefits of Bilingual Education
8 Comments

Yes – I heard the same story and had the same reaction to the “communist regime” comment. I really am not surprised though. I grew up in South Carolina and my brother lives in Georgia. I dont really want to make it a political thing, but I think there is a different attitude towards “foreign” things and other languages.

I think the only thing you can do to combat these feelings is spread the word to people you know. I feel like my having bilingual wedding invitations, a bilingual mass (in South Carolina), really diverse music at my wedding reception, and my husband doing the toast in both Spanish and English was number one to represent who we are, make sure his family felt included and comfortable, but also to have the secondary effect of giving people the experience with another language. Hopefully this makes it a little closer to them and seem less weird and foreign. I hope I will continue to do that all my life.

It was really cool to see the video posted yesterday about the English speaking family who had their kids in a dual immersion program. They are the ones that can really do a lot. They are putting their kids in this program for primarily academic reasons (although Im sure they appreciate the cultural ones as well.) They are the ones we have to remember when faced with attitudes like the one in the article.

Actually the article says that most of the concerns are practical, not political. The school is underfunded and the region has a high dropout rate. If the school is not investing in other subjects like science, math and English, then those children will not have an opportunity to use Mandarin as adults. Most of the people who use Mandarin are college educated adults working in investment banking, international law and academia. In addition, the business class in China speaks English, so it’s not even totally necessary to know Mandarin to do business there. The principal in the article talks as though Mandarin is a panacea, the answer to his district’s problems. I think it’s great that children are learning a second language, but they still have to master English, science, math, etc.

There is a lot of research about the cognitive benefits of bilingualism. It can actually lead to the brain developing in a different way which has a positive effect on the bilingual´s academic life. It is dangerous to assume that dual language education is only for students who will go to college because we can not really know what a child´s future will be when they are in elementary school. As a teacher, I would NEVER assume one of my students will not go to college and I teach all students in that way.

I also recently read an article (dont know if it was on Spanglish baby or not) about how there really is not a lot of additional funding needed to implement a bilingual program. So its not like funding is going to that instead of other subjects. It would be interesting to learn more about that.

I understand what you’re saying, but math and science have positive cognitive effects too, which will help these kids in the future more than Mandarin. Too bad the Chinese won’t send over math and science teachers.

Good article Elise, I wish I could have the option of teaching my son Mandarin, it is not only for business use, it is an amazing opportunity for their brains to develop a “think out of the box” attitude and learn another culture.

What a great opportunity for these children!
After reading all those comments make me realize that there is a huge misconception about what immersion education really is. With so many people believing that learning a second language is point less and even more with so many thinking “speak English or leave”, I think it is a must to talk about all the educational benefits of learning a second language before discussing immersion education.
Also, it is necessary to explain that children in language immersion schools are also being taught the same curricula as their English-only counterparts and they will graduate knowing the same subjects plus a second language.

Unfortunately, the real issue with the funding of these programs by Hanban isn’t the political one (or Xenophobia), but that the quality of these teachers from China is horrendous.

Marvelous Guidance, thanks much. Pertaining to buyers who all choose to melt fat super fast, consider our website for the appropriate manner in which to melt fat expediently.