Can the Latin Diet Be Healthy? 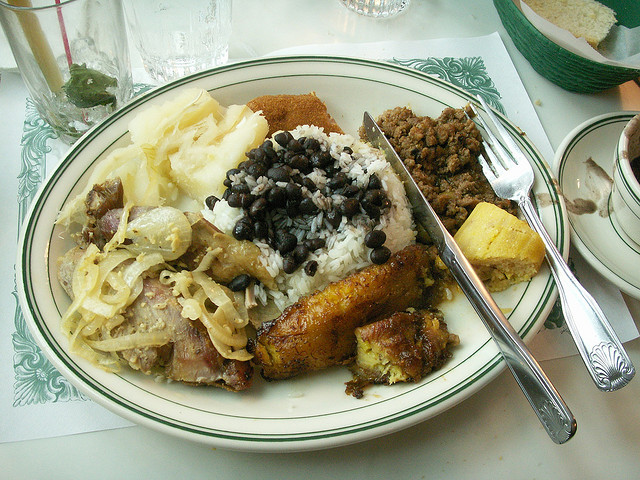 One of my biggest challenges this summer has been cooking for three kids, three times a day. Although I like to cook when I have time, space and money, those factors have been seriously lacking of late. We have certain staples that are always a hit (cinnamon pancakes…for dinner!), but I’ve discovered a roadblock that I didn’t expect. The greatest obstacle to keeping their bellies happy? Requests for Latin foods that I don’t know how to make, or (more often) that I refuse to make because they are unhealthy.

My son wants some arroz con habichuelas and lechón like his abuela makes, and my stepdaughters are constantly requesting flan and tostones. Basically, they want salt, sugar, and grease! I’m the last person on the planet that anyone should look to for unhealthy foods. I can bake up a storm, but usually only do so for special occasions.

I’m a huge fan of the flavors in Mexican, Cuban, and other varieties of Latin food, but I try to avoid the ones that are fried or soaked in lard. Nor am I the drive-thru mom. I run in the other direction when I see a greasy plate of anything, and unfortunately, I associate a lot of Latin foods with this very image.

Part of this reluctance on my part to venture into true Latino cooking is my paranoia that the kids will end up like all of their grandparents: with diabetes and high blood pressure from years of sugar and salt overload. Hispanic Americans are nearly twice as likely as non-Hispanic whites to be diagnosed with diabetes, and it freaks me out that our children already have the genetic odds stacked against them. Half the time (with the other parents), they are exposed to the dietary factors that may eventually create health issues, which makes me feel pressured to fight that with healthier habits at our house.

Does this mean I’m denying them an important cultural ritual, or looking out for them?

I don’t want to leave a bad taste in their mouths about the foods they love and associate with family, but there must be a better way to preserve the positives than to feed them the lethal goodies, right?

I love the healthy, flavorful recipes that have been shared on SpanglishBaby, and wish there were more resources for those of us who did not grow up cooking traditional Latin recipes. I’m searching for ways to make healthy foods, disguised as the Puerto Rican meals they love.

How do you balance nutritional concerns with your kids’ taste for the bad stuff? Any advice on how to cook up culture with a little less grasa?

The Fruit for All Project {Giveaway}

How to Get Back to School Supplies for Under $25

Remember flan and other postres are not daily foods when you’re outside of the US. When we are in Bogota, we eat huge quantities of fruits that you just can’t find the US (unless maybe you live in Miami). I’ve been dying for a granadilla since January! The only maracuya I’ve found was 5 dollars for a single one that looked like it when bad on the plane. When you have a diet with so much good natural food in it and yes some very high fat dishes and on top of that you walk wherever you go (or do pretty heavy labor, as the shrinking rural population tends to do) then your diet doesn’t hurt you the way it does when you transplant that to the US and the prices of fresh fruits and veggies skyrockets and the only traditional foods you can find ingredients for are the high fat high starch ones.

This is a good article Chelsea, in my case I try to keep it simple with tortillas, cheese, beans, avocados and sugar in moderation – “paletas de hielo” instead of ice cream. Grasa is good for kids but in moderation! I think portions are very important, unfortunately we get served so much food everywhere that our standards are bigger sizes than we should really eat. I am sure you are a great cook and I wouldn’t worry too much about your kids getting those horrible illnesses. I suggest keeping it simple, small and with physical activities so our little Latin niños grow healthy! Saludos : )

I have been thinking about this alot. I have done a few things to try and make Latin cuisine a little healthier. I have switched to brown rice, and cook most food with olive oil. I have also started mixing my own adobo to cut back on salt and have made my own sofrito so cut own on preservatives.

I cook Cuban food all the time, but with my own twists to make it healthy. I use turkey instead of ground beef for picadillo, albondigas, etc. If you season it the same way, you won’t even know the difference. Beans are also great, lots of protein and healthy if you make them with lots of veggies and olive oil. I don’t like brown rice so still stick with white, just watch the portion sizes. Also, I only cook poultry and seafood at home. No red meat or pork. We leave those for an occasional dinner out or holiday dinners. Dessert is always fruit, sometimes with piece of cheese. Other desserts, like flan, are for special occasions. Portion sizes and everything in moderation is key!

I think that any cuisine from anywhere in the world has its unhealthy and healthy options, (even Japanese food which is generally regarded as being healthy includes things like deep dried “tempura”, white rice, use of soy sauce which is high in sodium, etc.)

Whether I’m cooking the American food I grew up with or the Salvadoran food my husband grew up with, I have to be careful. My tendency is to love all the unhealthy options. I think that since your tendency is towards being healthy it should be easier for you to make the kids the things they’re craving but in a healthier way. Maybe it isn’t authentic, but you can make substitutions so the food is healthier. For example, if you make arroz con pollo, make it with skinless chicken breasts and brown rice instead of the traditional way. Make oven-baked tostones, flan with low-fat milk, etc. The recipes are out there if you search around.

You have a lot of great advice here in the comments. Excellent post.

By the way, you inspired me to write a post on the topic, (which includes a link to a free cookbook you might find useful!) http://latinaish.com/2012/08/06/healthy-pupusas/

I hear you. I love Peruvian food but it could be heavy on white rice and potatoes. I hardly ever cook white rice anymore. I took a while for me to get used to brown rice (and whole wheat pasta), but now it is what I cook for most dishes, except for arroz chaufa (fried rice) and arroz con pollo. Also, I use vegetable oil or olive oil and most recently coconut oil for cooking/baking. Fortunately, there is no much frying done in our cuisine but if I have to fry something I usually do it in a cast iron pan with very little oil. Also, I use the broiler for “pollo frito” (always skinless) or “pescado frito”.

I have cut down on salt by a lot and got used to it. I don’t ever use added sugars unless I am baking and even then I cut down on the sugar. When possible, I use honey to sweeten desserts. Not latino food, but I made popsicles for my son out of frozen fruit and a bit of honey, that’s it.

The only thing I find it hard to eliminate is the amount of starch. I have to have rice and potatoes if the recipe calls for it, but sometimes I just make a nice filling salad and a slice of healthy bread for a change.

But as one of the previous poster mentioned, sometimes I do make an exception and allow the sugar and grasa once in a very long while.

Definitely, cooking from scratch is the best way to go using wholesome ingredients.

Great article. I grew up with Vitamina T as the mainstay of my diet. And it wasn’t in any way healthy.

I do not even know how I ended up here, but I thought this post was great.
I do not know who you are but definitely you’re going to a famous blogger if you are not already

Hello There. I discovered your weblog using msn. This is an extremely neatly written article.

I will be sure to bookmark it and come back to read more of your helpful information.
Thank you for the post. I will definitely return.

This is a very helpful piece of facts. We’re glad which you contributed this helpful information and facts along with us. Please be all of us up to date like that. We appreciate you revealing dieta.