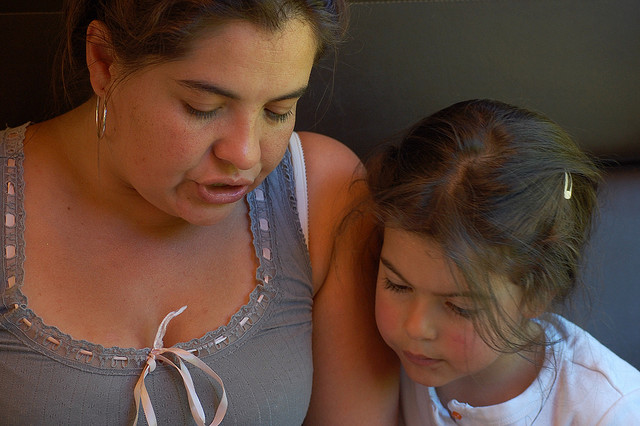 Recently, I’ve been thrilled to notice an increase in Marisol’s Spanish vocabulary. Now, this doesn’t mean she is fluent in Spanish —we are most definitely raising Spanglishbabies in our family. It’s been a challenge to even get this far because I am the lone Spanish speaker in the home, and I’d call myself fluent only in limited settings. I am most definitely fluent in “baby Spanish:” Vamos a comer. ¿Quieres leche? ¿Dónde está el gatito? ¿Tienes hambre? But ask me to talk to you in Spanish about my work, or about the economy, or about anything really complicated and my vocabulary fails me.

I wish I had the time to take an advanced Spanish course or even to read more in Spanish, but I don’t. Like most moms, I am overwhelmed as it is! My husband understands some Spanish, but speaks very little. It’s been the best I can do to make Spanglish the family language.

I had started feeling really disappointed in our language adventure a few months back when I started noticing how many truly bilingual families there are around us. I saw these parents conversing in fluent Spanish with their kids and felt like a failure. But then, I decided to stop being sorry for myself, and let myself instead be inspired by these families to become proactive about exposing the girls to más español one way or another.  Since then, I’ve done a few simple things that have made a big difference. For those of you with modest aims, I thought I’d share these small changes that have made a big difference in our Spanglish family.

1. Enlist help. When we hired our current babysitter, we emphasized the importance of speaking Spanish with the girls. In Los Angeles, it isn’t hard to find a Spanish-speaking sitter. What can be a challenge, particularly with college-age sitters is ensuring that they speak Spanish with the girls. We were clear that we really want the girls to hear Spanish and our lovely sitter not only speaks Spanish with the girls, she also brings Spanish music to share with the girls and teaches them songs. Each week, Marisol has new words to share with me that our sitter has taught her. If you can’t hire help, it would be worth it to ask for free help from family or friends who speak Spanish and are willing to visit or be visited regularly. Unfortunately for us, most of our Spanish-speaking family and friends are far away.

2. Música! In addition to many great bilingual records out there, we have found other sources of música. The girls are both in love with all things musical right now. We’ve discovered that free music services like Pandora and Spotify have good selections of música. In Pandora, I’ve only been able to find rock en español, and not children’s music, but Spotify offered me dozens of CDs to choose from when I searched for kids music. [Note, this is not sponsored content, just my two cents.] As silly as it seems, even just inventing little songs in Spanish as we go through our day has enticed the girls to speak Spanish much more than otherwise.

3. Libros. We haven’t made as bold a move as Suzanne did by donating all her English books, but we have made an effort to buy and borrow more books in Spanish than before. This is just as good for us parents as it is for the kids. I’ve learned many new words by reading them to the girls.

4. Amigos y Amigas! We had our first bilingual playdate with two other families just one week ago, so I can’t say that there have been huge changes, but I can say it was fun! It was nice making new mom friends who are similarly imperfect in their Spanish prowess, yet are making the effort to pass the gift of Spanish on to their children.

5. Take a Clase. We took a free children’s Spanish class and even though I didn’t love it enough to enroll, it did give me some ideas that I could put into practice. In the long run, getting a small taste of Spanish in a classroom did renew my commitment to searching for a bilingual elementary school for the girls. In the interim, the preschool Marisol will be starting next week (did you just hear my heart breaking?!), is a Spanish-friendly place, although not bilingual. The teachers and director there incorporate Spanish organically into the day using music and conversation. I’m hopeful that learning and playing in Spanish will give Marisol an even greater confidence en español.

So those are my small changes that I have been able to commit to. I’d love to hear any other tips or tricks you have found for weaving español into the fabric of your family life!

Join Our Talk on Tips and Tricks for Raising Bilingual Kids!

Reading in English and Translating into Spanish… at 5 years old!

I have found that working on my own Spanish helps too. I feel as you do about being pressed for time, so my solution has been audio-books. I can listen to them on my commute or when I am working out. Check out the site http://www.albalearning.com. I have even used it in my classroom, and it is all free.

I have also requested that all the teachers at my sons’ preschool speak to the boys in Spanish. The director who is bilingual is very supportive, and the Spanish speaking teachers are happy to use Spanish with the boys. Even my younger son’s Vietnamese teacher will use Spanish words with him. It is great!

Hi Elsie,
Loved this post! (I have a daughter Marisol too!) I can relate to the fluent baby Spanish. My husband speaks only to our daughters in Spanish, but it seems anymore it isn’t enough. They definitely understand Spanish, but they don’t speak it. I try to speak when I know what I’m saying is correct, but speak in English if I am not certain. I would hate for them to pick up bad Spanish from me. Things we use a lot in our home are books in spanish, watching El Mundo de Elmo on youtube, and listening to music exclusively in spanish. My girls are very fond of Mariachi music.

I totally agree with you! I am a newly retired Spanish teacher with a 2 year old grandson and I have started speaking only Spanish to him when he is with me..I get to see him about 4-5 times each week, but people actually stare at us when I am in “Spanish mode” with him. I know he doesn’t understand it all, but he does get some things…he usually responds in English though. I refuse to give up on it…I want him exposed to the language…I tried to find a Spanish speaking playgroup for him, but there are none. I refuse to give up…even when people are staring at us! I know he will be thankful in the long run.

Elsie,
I feel the same way!!! And it makes me sad and sometimes insecure. Interestingly, though, when I find myself around native spanish speakers with their children it is actually me that can keep speaking in Spanish to my daughter. In other words, they switch from Spanish to English because (I think) they feel awkward because others can’t understand what they are telling their kids. This happens at the park a lot. Like when a kid gets in the way and then they start to tell their baby in English (so the other parent knows what they are saying) “Please move so the little boy can get through” for example. I on the other hand stick to Spanish no matter what. I even tell Sabrina to say “hola” to the kid smiling at her and then of course the parent looks at me like “Umm don’t know what else you said.”

I am currently trying to form a Spanish play group because my friends and sister don’t speak to their kids in Spanish and as Sabrina gets older I want her to play with kids who will speak in Spanish to her, too. Its hard. I think there will always be a challenge.

I can really relate to what you’re going through Elsie. I too, am the only person who speaks spanish to my son (and I am far from fluent). Although I do take spanish courses in school, it seems that I learn more being around other spanish speakers. Some things that I do to help Javier hear and see spanish is on the way home from daycare we listen to the spanish station or spanish songs I’ve downloaded onto my ipod, we read in spanish and english and I encourage counting in spanish and enlish, we watch Pocoyo on Saturday mornings (in spanish), when it is his birthday or “gift giving” holiday, I encourage my family to only purchase toys and books that are spanish/english, and I find that if I do the spanish alphabet while dancing or jumping he will copy me. (I have found many kid friendly songs on youtube). The idea with your care-giver is really smart and finding a bilingual school. I stay in a state where they do not encourage anything besides english unless you go to a private school (I sure can’t afford that).

Check out Batanga-A latino Pandora-like app. We listen to this radio station all the time: Niños Las Rimas de Juego

We are moving to the suburbs east of LA this summer. I’m beginning my search for Spanish play groups. Unfortunately at this point, I don’t think we’ll be able to move into a district with bilingual schools for my son to start kinder

but I’m still doing my research. Thanks for the leads.