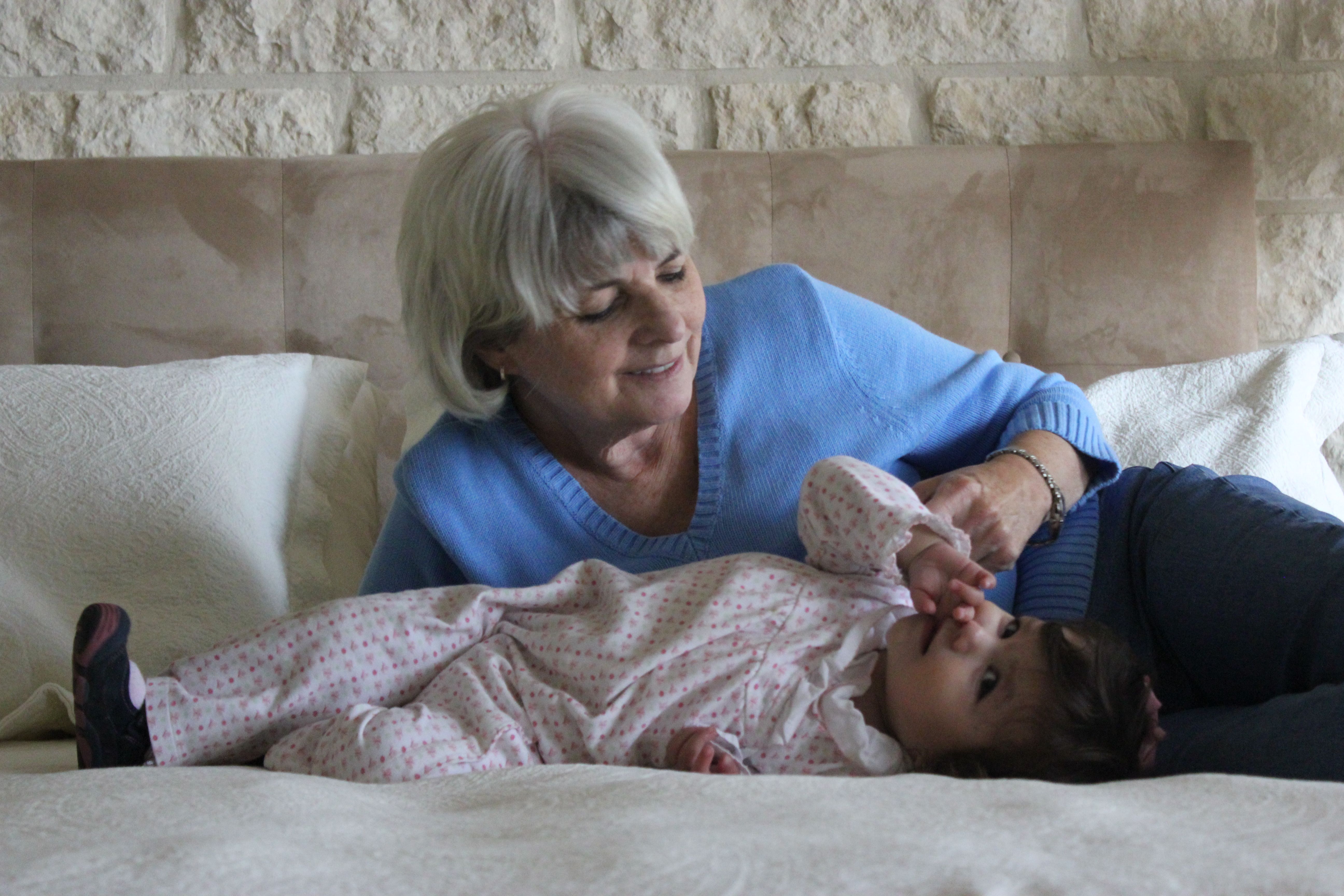 There are two things my mother-in-law and I had decided before Sabrina was born. The first was that she would be called Oma (abuelita in German) because she very much identifies with her German roots. Her family immigrated in the late 18th century to the United States via Russia. Both her parents (Sabrina’s bisabuelos) first language was German.

The second thing we had decided was that she, being the Oma or second generation German-American, would speak to her in English and Abuelito would speak to her in Spanish. Recently, I noticed that my mother-in-law was starting to speak in Spanish and English to Sabrina. In the middle of noticing this it occurred to me that she might be worried about Sabrina not understanding her! When I asked her she responded, to my surprise, “I am afraid Sabrina doesn’t know me because she doesn’t understand English,” which is the very reason why we had decided to teach her Spanish! We want her to know her family’s roots. We want her to know that she is Latina. We want her to see and interpret the world with at least two languages: Spanish and English. We want her to embrace both her Mexican and Ecuadorian heritage, but in the midst of focusing on the minority language I, in a way, forgot that she, too, has a German history.

I think it is interesting to note that immigration in our country has always had different waves throughout history. At the turn of the century there were many immigrants that came from different European countries. During WWII German-speaking individuals were stigmatized for obvious reasons (i.e., holocaust), which resulted in German language schools to, essentially, shut down. In other words, many, many immigrants follow the same pattern of losing their native language by the second and third generations. I could go on about how the Latino immigration experience is very different and almost not comparable to the European immigrant experience at the turn of the century, but that would require a whole new post.

On our most recent trip to La Miranda (what we call la casa de los abuelitos) I found myself saying to Sabrina “La Oma habla inglés” or “El abuelito habla español” which was such a rewarding thing to have to say since we have been making a huge effort to only speak to her in Spanish. As my bebita continues to learn the intricacies of language-use, I am certain that what she is also picking up on are the messages we send, and to a large degree messages that take precedence over oral language, which are those we express with a smile, a hug, a kiss, or a caress — the language of love.

An Easter Egg Hunt in Spanish!

English is Everywhere!
The Holidays: Blending Old Traditions with New Ones
Teaching Baby Sign to Our Trilingual Daughter
8 Comments

It’s very nice what your are doing. I think that our heritage and backgrounds define us so we should strive to remember what we are and where we come from. Great post!

P.S. I’m so happy to be international!!

Thank you, Tony! I agree I think our heritage is definitely what helps shape our identities!

Que tierno! It will probably be easier for Oma once Sabrina starts to speak more and Oma realizes that she does indeed understand Ingles. It is amazing to see tots automatically use their different languages with different people according to what he or she understands. LOVE the foto!

Gracias, Elizabeth. I have to admit I try to write about moments that inspire me. La Oma inspired last weekend with her interactions with Sabrina

I think eventually Sabrina will figure out who speaks which language, too.

My daughter has an Omi too (Omi I guess being a variation on Oma, like Abuelita for Abuela? Or maybe it’s just my mother’s version). Only her Omi speaks to her in Spanish because in addition to her German heritage she’s also Mexican! That’s where my (and my daughter’s) Latina heritage comes from. My mother grew up speaking Spanish, German and English. In my generation we lost the German since the Latin@ heritage was closer, more immediate, especially in the States. And so now we are hanging on to the Spanish. By the skin of our teeth, but still, the amount that my daughter knows in both Español and Ingles is quite astonishing (she’s three and a half). She can code switch quite easily. And often if I say something in English, she’ll “remind” me of what the word is in Español- makes me giggle!

But your post is a great reminder to honor all the different parts of m’hijas heritage. It is rich and deeply patterned. Love it.

My parents are also Oma and Opa. My father went to Kindergarten in 1945 and was smacked with a ruler once for every word of German the teacher heard from his mouth. Just imagine, before that the entire community, in the schools, in the churches, at the courthouse, in newspapers, had all stayed with German (Plattdeutsch) since the 1830′s. It disappeared in a flash. Many, many years later we had the opportunity to visit distant relatives in Germany my mom met an Oma who was the epitome of what kind of grandmother she aspires to be.
When they found out they would have a bilingual (Spanish/English) grandson, they were more than supportive. They were excited.
It’s really true, you don’t know what you’ve got, ’til it’s gone. Ironically it is my husband’s side of the family, the Spanish-speaking side, who have been not entirely positive about our son being raised bilingual deliberately.
Suzanne, I can assure Sabrina’s Oma that her beloved nieta will indeed understand and know her in English. We chose to use both languages (basically, OPOL) at home with our son from the beginning with the intention that when my parents visited, since they speak no Spanish, they could connect directly with their grandson in English. But what happened is that when he started speaking, himself, every word in his mind was either English or Spanish. He would say “ball” but never, never, never say “pelota”. He would say “agua” but never, never, never say “water”. Since I’m the only one fluent in both languages, we went through about a year that I was the only one who could really understand him. That felt like a long, long time. So much for the plan, that he’d be able to communicate directly with his grandparents (y tios)!
It started getting better when he was about 2, but it’s been gradual… Lots of moments when you could easily question yourself, whether he’s getting it, whether he will get it, what is really understanding…?
He’s a couple months away from turning 4 now. He calls my parents Oma & Opa, he calls my husband’s parents Abuela & Abuelo, and when he talks about them with someone speaking in English he says My Grandma or My Grandpa. It’s just amazing and dare I say seemingly miraculous how they figure it out, incredible, you almost wonder whether it will happen, but it DOES happen.
I would encourage your mom to use whichever language she feels most comfortable speaking really well that she can impart a rich, full meaning with all the nuance and emotion. I really think the little ones understand a lot more than they let on…!

I loved reading your post and everyone’s comments. It is also great to see that there are other “crazy” people (as we are sometimes called) like us, teaching children more than one language. Our children (5 yo and 3.5 yo) speak Spanish and French at home. English has been picked-up due to peer pressure at the park, TV and listening to us (the parents) talk among other adults. On my side, my children are 4th generation Mexican-Americans. My siblings and I grew-up on a board town and have lived in both sides/countries within our lifetime. We grew up speaking Spanish at home and learned English as we got older. On my husband’s side, they are first generation Moroccan-Americans. My in-laws do not speak English. They speak French, Moroccan Arabic, Hebrew and some Spanish. My parents are Tito y Tita. My siblings are tios y tias. My in-laws are Papi et Mami. My husband’s siblings are ton ton et tata. I have learned that, like with everything else, consistancy is key. My children switch from talking to me in Spanish to talking to my husband, Papi et Mami in French….sometimes it takes them a while to switch everything, but they do it! I love it!!! When we decided to speak multi-languages at home it was for the same reasons everyone mentions, but with time it has grown into something more than that – it is teaching our children about differences and empathy. We don’t all have to look the same or talk the same to accept and respect each other. I hope my children embrace speaking multi-languages as they get older and become more independent, and hope it will mold who they are with strength and confidence to feel proud of themselves.
I can understand Oma’s concern. I would really like to encourage her to continue speaking to her nieta in German (if that is the language she feels most comfortable talking in, AND if that is something that is important to you (the parents)). Sabrina is still very young but with time everything will start to ‘click’…before you know it, they could have their own little ‘secret language’ to talk privately. Have courage! Don’t let fear be the driving force behind your choices (easier said than done, I know!) Like you said, at the end of it all, it is all the TLC Sabrina receive that matters.

My mother-in-law does the same, except since my toddler speaks mostly English and Tagalog and doesn’t know Spanish too well, she ends up speaking to him in English even though her first language is Spanish. We remind her that she should continue speaking to him in Spanish since he hardly gets exposed to it, but I can see now that maybe that puts her in a tough spot since she can’t relate to him as well as English- or Tagalog-speakers. Very insightful post, thank you.