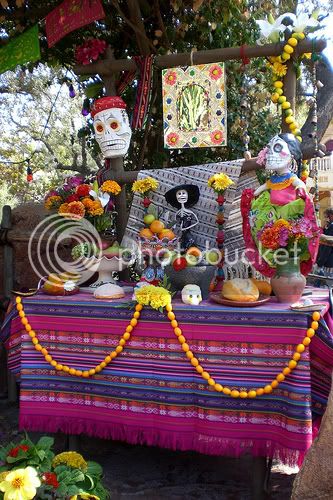 In our bicultural home we have a fondness for Día de los Muertos {Day of the Dead}, which is celebrated on November 1st and 2nd, and is a traditional Mexican holiday dedicated to the memory of the loved ones we’ve lost.  The idea is that we celebrate and remember them with joy, cheerfulness and colors.

This tradition is so full of history and symbolism that it’s one I’m hanging on to tightly to instill some meaning into these over-hyped holidays.

Altars are made in honor of family and friends that have passed away and are decorated with their pictures, personal objects or mementos and candles.  Their favorite food and drinks are also placed on the altar, along with a trail of marigold flowers to create a path so their soul can find its way back and join the celebration for the day. The idea is that by placing these artifacts, flowers and foods the person will be remembered and celebrated for who they were in life and this will encourage them to pay a visit.  The concept might sound spooky, but it really is celebrated with so much positiveness towards the inevitability of death, and in such a festive environment, that the feeling of being scared will rarely creep upon you.

So much so, that even cemeteries and burial places take on a carnival-like atmosphere.  Aside from creating private altars in their homes, people also head out to cemeteries to visit their beloved and tend to their resting place.   The burial grounds are cleaned, decorated and adorned with ofrendas (offerings) such as pan de muerto, strings of flor de cempazuchitl (marigold), sugar skulls and toys.  In many parts of Mexico it’s also a custom that the families camp out all night in cemeteries to accompany the dead during their “visit.”

Day of the Dead is a holiday infused with so much tradition and history that Mexico as a whole embraces it.  You can see some very elaborate, to the point of being works of art, altars in public schools, government offices and most public spaces.  In fact, it’s one of the few ancient indigenous celebrations to remain after the Spanish conquest.

The most important icons associated with Día de los Muertos are the calaca, the Catrina, las calaveras and the pan de muerto.  These are all basically representations of death in a playful way.  The message is that passing away is just one more inevitable stage in life that should be met with joy because it just is what it is.  Talk about chilling out!

I’ll tell you a bit more about each so you can incorporate these in your own Día de los Muertos celebration.  It’s all about making it work for you.

The name simply means “skull.”  However, in Day of the Dead terms it takes on several meanings.

1.   A sugar or chocolate skull which is fancifully decorated in many colors and which is typically personalized with the name of the person it will be given to as a treat.  This is a very fun tradition to start with your kids.  You can buy simple calaveras via Amazon and have fun decorating them with different color frostings.  These can be handed out as Día de los Muertos gifts to friends.

2.   A satirical and humorous short poem written to criticize a social situation or person, usually  aimed at politicians and celebrities.  You can imagine the fun cartoonists and print news outlets have with these ones!  Schools also bring out kids’ literary creativity during this season by having them make up their own calaveras literarias and even holding contests for the best ones.

Here’s a great example of one written for the great Colombian novelist Gabriel García Marquez. (Sorry…it’s in Spanish and the translation wouldn’t make sense):

3.  Artistic representations of skulls abound during this holiday.  These are also called calaveras.  We can thank artist José Guadalupe Posada for popularizing them and for dreaming up La Calavera de La Catrina as a satire to the upper classes. Little did he know it would become his most famous lithograph and one of the most obvious graphic representations of Día de los Muertos and Mexican culture at large.

It literally translates into “Bread of the Dead” and is what I look forward to the most.  It’s basically a soft and sweet, round-shaped bread that’s baked to place as an ofrenda on the altars and to be shared by families and friends with hot chocolate or coffee.  Traditionally, the top of the bread is decorated with pieces of dough thinly rolled out to resemble bones.  Take a look around  your local Latin market or bakery to see if they’ve baked some this week.  If not, and you’re feeling adventurous, try out this recipe I found here.

Photo by Sarah B in SD

These are basically skeletons having a blast in their afterlife!  Calacas are used as decoration and also to spoof on popular celebrities and politicians by creating calacas in their image.  The tradition is to dress them up in colorful clothes and have them appear to be dancing,  playing a musical instrument, eating and just plain having fun.  A great example is this video called Viva Calaca of animated skeletons dancing to a high-energy song.  Warning:  your kids will want to dance like a calaca!

Octavio Paz, Mexican poet and essayist honored with the Nobel Prize in Literature, perfectly defines in his book El Laberinto de la Soledad the special relationship Mexicans have with death:

Translation: “For a resident of New York, Paris or London death is a word that is never uttered because it burns the lips.  A Mexican, on the other hand, frequents it, defies it, caresses it, sleeps with it, celebrates it, it’s one of his favorite toys and his most permanent love.”

Spanish Songs for Your Bilingual Children

An Immersion Adventure In Mexico | Coming Back Home

This one is still a work in progress………

This one I found 2 years ago can’t find it again tried my best to accurately rewrite it.
I think it is so cute and funny.