The Number Game: Embedding Language Learning Into Other Subjects 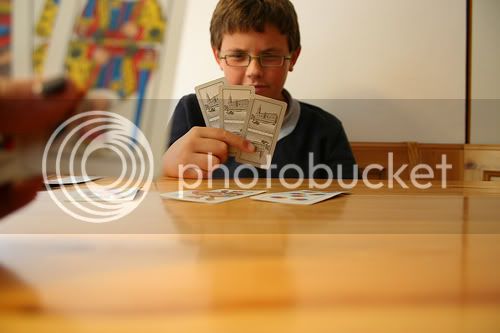 My husband and I are raising our sons to be trilingual.  Using the OPOL method, I speak to the children in Spanish, and he speaks to them in German.  While our baby is still in the babbling stage, our two and a half year old is quite verbal, constantly commenting on what he sees and asking questions to learn more.  I am often told what a wonderful gift I am giving my children by speaking to them Spanish.  Our pediatrician, my friends and family, and even complete strangers have been nothing but positive and supportive of the efforts that my husband and I are making to raise our children to be trilingual.  The Spanish interaction with my son often attracts the attention of complete strangers who often have positive comments for us.  I love that people are beginning to recognize that it is a good idea to have children learn to speak other languages while they are still young.

Encouraging feedback from complete strangers is nice to hear, but my favorite encounters are with bilingual adults who like to share the stories on how they themselves became bilingual. Just the other day, a man behind me in line at the store enthusiastically told me how his mother would send him to Colombia every summer so that he would be immersed in Spanish while visiting his family.  He went on to tell me that the ability to speak another language has enriched his life and provided him with many professional opportunities.

My absolute favorite supporter for the learning of another language is the student who works at my grocery store while pursuing his college degree.  He shared how he grew up trilingual speaking Spanish with his Mexican mother and her family and Samoan with his dad and that side of the family.  What I particularly love about this young man is that he actually tells my two year old, in Spanish, that learning other languages is going to be a great advantage for him some day and that he will have a lot more job opportunities because of his skills.  I’m not sure my son fully comprehends his message, but he definitely understands that this young man approves of the languages he speaks, and I love the positive message he gives to my boys.

I am well aware that learning another language is beneficial, but I am always excited to see scientific studies which prove that there are cognitive benefits from speaking another language.  Recently an article from Science Daily detailed the latest research on the benefits of bilingualism.  Studies have shown that knowing more than one language can lead to increased creativity and advantages for learning in general and complex thinking. Knowing multiple languages also allows for increased mental flexibility and enhanced interpersonal and communication skills.  Another language can even possibly delay the onset of age-related mental diminishment later in life.

I found the current research results encouraging.  These finding definitely support my efforts in raising my children to speak other languages, but the article also gave me an idea.  Most of my teaching has concentrated on the instruction of language, but embedding language learning into other subjects can be quite an effective learning technique. While teaching Spanish at the high school level, I did use a math activity to further the language proficiency of my students.  The kids really enjoyed challenging each other. I tried playing the game with my own son, and found that the activity can be adapted for young children too.

In order to play this game, you should use the number cards from a deck of playing cards.  Start by just laying out one card at a time, and have your child tell you the number in Spanish.  Depending on your child’s mathematical knowledge, you can get more creative the second round.  Throw down two number cards and have your child tell you the sum of the cards.  Go through the deck practicing addition and numbers in Spanish.  It is not necessary to stick to addition, use subtraction, multiplication or even division.  Make it a game, let this be a fun activity with your child, not a drill. After your child goes through a round let them throw out the cards for you.  You will be surprised at how challenging it can be to remember those math tables you memorized so long ago in school.  Your child will relish the chance to be the teacher, and will continue to further their own language and mathematic skills.  Try to make the math even more challenging by creating your own number cards using index cards and placing higher values instead of just the numbers from one to ten.

Since my child is still young, we were only able to practice stating the value on the cards.  My son did get very well at identifying numbers from zero to twenty.  We had a great time playing this game together.  He even loved challenging me when we switched roles.  For my son it was just a fun game to play with mom, but I know that we are practicing preliminary math skills in Spanish.

This game can really be played at all levels of math and even with only very basic language skills, but as the recent research demonstrates the cognitive benefits are vast.  Whether you and your children are fluent bilinguals or just in the early stages of language learning, have fun with math and Spanish while playing together.

Video of the Week: Wavin’ Flag

What is Code-Switching and Why Do Bilinguals Do it?

Kudos for integrating language with other academic content. That was key to my recent training for K-12 French certification. Although I’ve always been a “language/humanities” sort of gal, I’ve discovered that math and science are especially well-suited to practicing a second language because they are so hands-on. Math manipulatives are a language teacher’s dream! And don’t even get me started on sink-float, life cycles, plants, and planets! An added bonus is the content-related vocabulary that children will acquire. Excellent article. Very inspiring to see a family raising a child with THREE languages!

I am very impressed with how you teach your son! Thanks for all your thoughts and the fun game!

Great idea! And the older kids can write the numbers on the cards, and make pictures on the backs of the cards, for everyone to use.

This post is a great reminder that using “tools” (i.e., games) can be a great help when you’re struggling with coming up with new ways to encourage your children to speak a language that sometimes they don’t want to speak or have an interest in. Do you have any suggestions for board games in Spanish?

Check out this Find we posted last year:
http://www.spanglishbaby.com/2009/11/table-topics/

Table Topics is a great game to get the conversation going in Spanish with your older children.

Gracias Ana! This is fantastic. What a great resource…!

Monopoly in Spanish is sold at Sears and Sears.com for $13 — talk about imbedded math!
(this is the one that has the street names and other blocks on the board actually in Spanish, not just “Spanish rules”).
Various retailers come up by googling for example “Spanish Scrabble” , “Spanish Game of Life” , “Spanish Bananagrams”.
I try to make sort of a Spanish zone with games like Othello, Connect Four, Chess and Checkers — I say please speak only Spanish while we are playing this game. In my case I’m not a native speaker and I need my husband to teach me the words for games, but I think it works equally well for getting the older kids to agree to a period of Spanish-only.
And don’t forget the NAIPES

Monopoly in Spanish! Now that would totally work at home…my kids LOVE Monopoly…Thanks for the suggestions!

Generally I don’t read post on blogs, but I wish to say that this
write-up very compelled me to try and do it! Your writing style has been amazed me.
Thanks, very nice article.