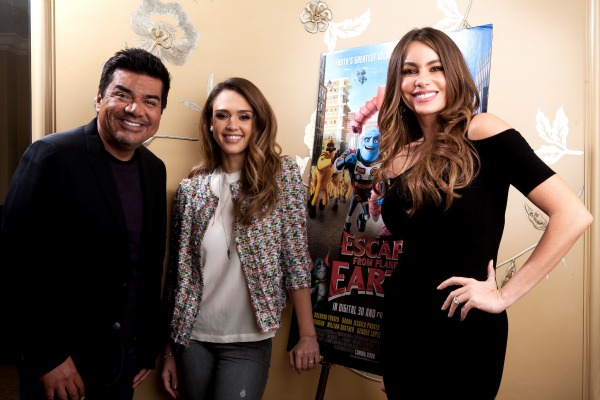 When SpanglishBaby was invited to see the new 3D animated film Escape from Planet Earth we were happily surprised to see that it’s an action-packed movie all about familia. The blue family from Baab includes Gary, a husband and father, Kira, a loving wife and mother, and their son Kip. And you can’t forget the superstar uncle, Scorch. This family is just like any ordinary family but what makes them stand out is their interplanetary intelligence and courage in times of trouble. What was refreshing about this animated family was that they were each different in many ways. However, the fact that dad Gary is a tech nerd, mom Kira a stay-at-home mom, and son Kip just a little boy didn’t stop them from saving the day and becoming heroes.

So, who is escaping from planet earth and what drove this family to a cross-planet mission? The admired and celebrity-like astronaut Scorch Supernova, who also happens to be Gary’s brother. Scorch is known for making rash decisions in his quest to be the hero in every situation and this time around it led him to end up stranded on the “dark planet” — planet earth — as a prisoner of the evil General Shanker.

SpanglishBaby had the chance to chat on the phone with Jessica Alba and ask her a few questions about her role as Lena — Gary’s boss at BASA. Lena is responsible for sending Scorch on a mission to Earth and therefore catapulting the series of events. To much of everyone’s surprise, Lena ends up as one of the “bad guys” in the movie. Before we give too much away, check out our interview with Jessica Alba below:

SpanglishBaby: This is the first time you are doing an animated film. Did you enjoy the process and is there an anecdote you’d like to share with us about your experience?

Jessica Alba: I did. When I first started, you know you do several sessions, and the first time I did it the character was literally a sketch — a black and white sketch, and then each time I came in more and more the animation was done. But you know you’re sort of just listening to your own voice like really loud and there’s a glass wall and a bunch of people on the other side of the glass wall telling you “Louder! Can you punch that up a little bit?” or “Can you do that a little bit different?” You’re not really working with actors, which was strange and different but fun. It was liberating being able to play someone who is totally crazy and just all over the place.

SB: It must be fun to play the villain in this movie. Have your daughters seen the movie yet and, if so, what do they think about mommy playing the bad girl? Do you think they’ll like it?

SB: What we loved about this movie were the elements of girl empowerment, which we weren’t expecting. Was this something that attracted you to the script in the first place? What do you want girls to take from the two strong female roles in this movie?

JA: You know, I feel like it’s more now than ever, anything that appeals to the younger demographic in entertainment, there is a lot of female empowerment, so it’s not that unusual. The stereotypes have all sort of been challenged. You expect to see strong female characters. I think that’s just really cool and it’s nice to be a parent right now and have those types of women [roles] to look up to.

SB: SpanglishBaby is dedicated to raising bilingual and bicultural kids, so I’m sure our readers identify with you and would love to know what you are doing to keep your Latino heritage alive with your daughters?

JA: We have in our home, in our foyer. Basically, I asked my aunts and uncles, grandparents, my mom, dad and my husband the same thing: for all of the oldest photos that they have of the family. So we basically have generations and generations of photos in black and white all over the wall so my daughters can look at their grandparents and great grand parents as children everyday.