It is officially summer and it also marks the release of Disney Pixar’s newest family film, Monsters University. The prequel of the adored Monsters, Inc., Monsters University takes you back to when Mike and Sully were college rivals. As a SpanglishBaby contributor, I had the privilege to attend the Monsters University Hollywood premiere on behalf of our SB familia. Tail gating on Hollywood Boulevard with many of Los Angeles’s celebrities and their families was quite the experience, but having the honor to watch the world premiere of this highly anticipated animated film in the historic El Capitan theater was the highlight of the trip. 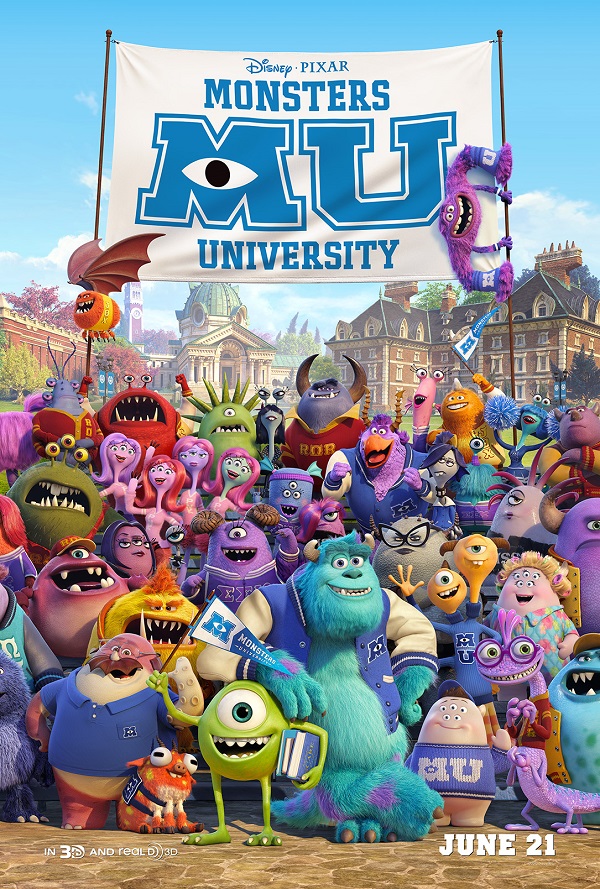 In true Disney Pixar fashion, the imagery of this film was simply amazing. With bright, vivid colors, the campus of Monsters University opens its gates to your imagination. However, although I enjoyed the premiere in 3D animation, I don’t think it was necessary. The film is just as beautiful in standard viewing. Check it out in 3D if that’s your thing, but don’t worry if you aren’t able to catch it in 3D.

In this film, we are introduced to many new characters that tell the story of how Mike and Sulley became the dynamic duo of the original Monsters film. I loved the many variations of monsters and their creative skill sets, and how their unique abilities come together to form a winning team. But Mike and Sulley were the real stars of the show. The pint sized green, one-eyed monster, with retainer, collegiate baseball cap and his can-do attitude was in keeping with the messages we are used to from Disney. Despite his small statue, Mike never stopped believing in his dream to attend Monsters University College of Scarers. Watching the friendship between he and Sulley flourish, despite their obvious differences, is also what we expect out of Disney. Teaching our kids to treat others how we would like to be treated is a positive message many parents seek to promote.

Monsters University is a quintessential Disney Pixar film. A concern is if young children would really understand enough of the nuances of the film to adsorb the impact of the messages. At almost four years old, I know that my child would not have understood. I did appreciate the film’s attempt to expose societal issues however, such as bullying and peer pressure. Even still the film is a fun summer flick -the imaginary is there. The messaging is there. I really enjoyed catching the back story of how these two BFFs met and became the Mike and Sulley we came to love 12 years ago, but the references to college experiences will almost certainly be above most young children. Perhaps Greek life references were for the adult’s enjoyment anyway, as certainly the film was plenty entertaining for the youngest kids to enjoy.

With summer and hot weather approaching, and the refuge of a cool movie theater calling out to parents, Monsters University is a worth while summer movie to catch.

I Was Just Teased At Pixar. ¡Quiero Más BRAVE!
Interviews from Disney’s ‘Sofia the First’ Lavender Carpet! {Video}
Disney Junior’s Sofia the First Is Supposed To Be Latina? Why I’m not buying it
2 Comments

I just saw this movie two days ago and loved it! Excellent choice.

Hello, I think your blog might be having browser compatibility issues.
When I look at your website in Firefox, it looks fine but when opening in
Internet Explorer, it has some overlapping. I just wanted
to give you a quick heads up! Other then that, very good blog!