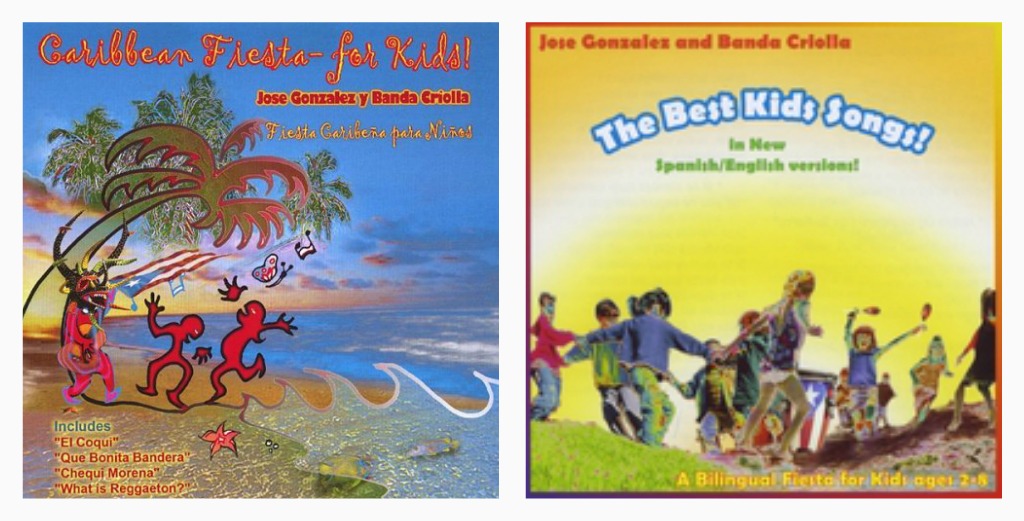 I’m always hunting for that children’s music CD—I’d be willing to bet we all are.  The one that’s entertaining, doesn’t grate on the nerves, the one we parents can play over and over at home or in the car and not just tolerate but actually enjoy.

Those albums are kind of rare, and I find that children’s music in Spanish is often especially screechy.  So I was pleased when I received two CDs by José González and Banda Criolla to review.  For one, the group was called Banda Criolla, which sounded good to me.  I also had high hopes when I read that their songs have been featured in the Putumayo World Music “Latin Playground” and “Caribbean Playground” series.

The first album, The Best Kids Songs! includes the usual suspects—Bingo, Row Your Boat, Los Pollitos.  The lyrics are all bilingual, and I loved the flute and guitar.  It strikes me as a good choice to reinforce both languages for younger children.  The second album, though, Caribbean Fiesta for Kids! completely won me and my increasingly hard to please six-year-olds over.  We sang along to El Coquí (also on the first album), and we all loved the songs that were new to us.  Chequi Morena had us dancing in the living room and we sang the Spanish Counting Blues with gusto.  And the Pollito Chicken Rap had us shouting, “pollito, chicken!!!” for days on end.  It was great fun, and now that we’ve enjoyed it at home, it’s earned a spot in the car.

We’re giving away The Best Kids Songs! and Caribbean Fiesta For Kids to one lucky winner.

To enter, all you have to do is take a listen to The Best Kids Songs! or Caribbean Fiesta For Kids and tell us your favorite song.

That’s all you have to do to enter this giveaway. If you want to up your chances at winning, then this is how you can get additional entries (only after you’ve completed the step above):

**Please leave a separate comment for each so we can count them and avoid mistakes.

1. Subscribe to receive blog updates and subscriber-only content via email and leave us an extra comment letting us know you did so or that you’re already a subscriber. Make sure to leave the comment using the same email you subscribed with.

This giveaway ends Thursday, April 13th, at midnight PST and is open to everyone over 18 years of age in the continental U.S. Void where prohibited. No purchase necessary. Check out the Giveaway Rules.

I love Por medio peso! If I don’t win, I’m gonna have to put that CD on my list of things to get later…

I have liked Spangish baby on FB!

I’ve loved Jose Gonzalez’ music from way back. Most of his CDs are available at http://www.cdbaby.com, on Itunes or other download sites, or his own personal website, http://www.criolloclasico.com.

I love the blues, so I like “The Spanish Counting Blues”.

I love the Spanish Counting Blues!

We liked the Best Kids songs album best. We laughed at the Bathroom Symphony and I really liked having a Spanish counting song.

It put a big smile on my face…El Gran Duque de York from the Best Kids Songs. My girls listen to an English version at story time at our library. They would love this one!

Finally, some kid music that doesn’t make me want to stick a hot poker in my ear! At first listen, I love these. I especially enjoyed “Por Medio Peso”!