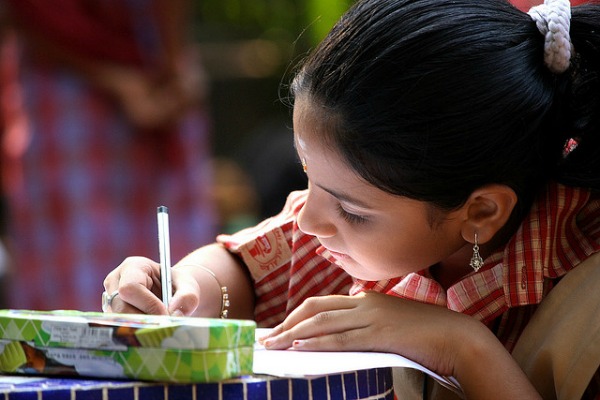 This game is a good activity for a group of 2 or more kids between 6 and 9 years old. It will help them write in a logical way, increase their vocabulary and have a better pronunciation. The idea was taken from a game called “Cadáveres exquisitos” played by surrealist poets at the beginning of 20th Century.

Ask the kids to sit in a circle. Give each one a different colored pencil. Read out the word in your list and review their meaning with them. Tell them that they’ll have to choose two words and write two short verses on each turn, one under the other. The verses must end with the words they chose.

Start the activity by choosing two of the words and writing the first two verses, as in this example:

Fold the paper to cover the first verse and pass it on to the first kid. He or she has to write his/her two verses and then fold the paper hiding everything but the last one.

The next kid has to do the same.  If the group is small, keep going until you have at least 10 verses. At the end you will have the entire sheet folded as an accordion.

Unfold the sheet and you will have a nice poem, absurd some times, beautiful others. Read it to the kids and together choose a title. This is fantastic practice for writing and phonics.

For a printable version of this activity click here.

Special thanks to Heritage Language for providing this activity. Visit their site for bilingual books and resources.

Starting a Spanish Language Storytime
10 Things I Didn’t Expect When I Started Speaking Spanish to my Baby
LéaLA Bringing Spanish-Language Literacy to the U.S.
No Comments