A Chat With John Leguizamo On The New Ice Age Continental Drift! 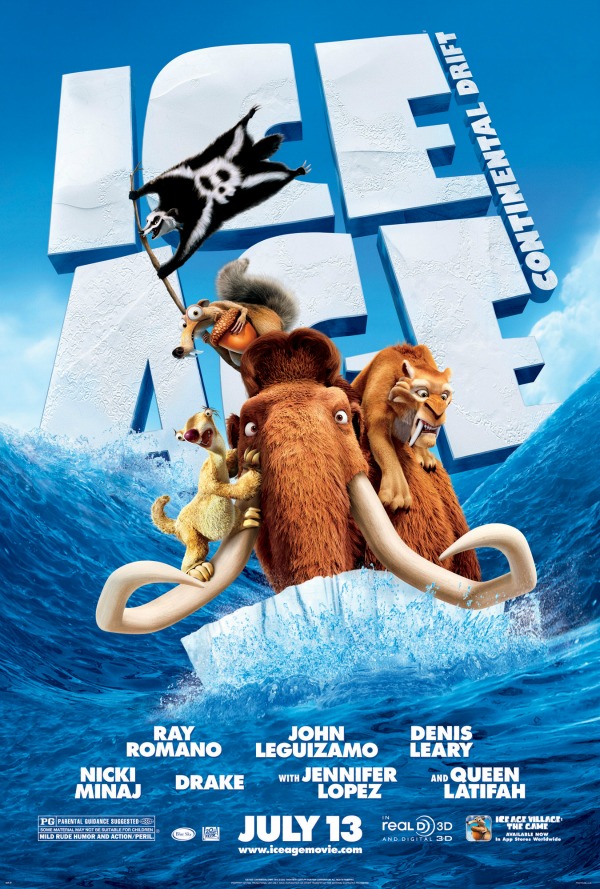 Ice Age: Continental Drift hits theaters this Friday! All of the beloved prehistoric characters are back for another adventure and everyone seems to be excited about it. As you might have already seen here Sid-mania is quickly spreading! It’s no wonder our niños love all of the Ice Age movies. The widely different characters come together to give us a good laugh and are also a great example of how different people, or furry friends in this case, can get along despite their differences. Family is definitely a recurring theme in the Ice Age movies, so when we had the chance to talk to the talented John Leguizamo, the voice behind Sid, we had to ask him about the Ice Age family. Check out what he had to say below!

Q: When you look at the cast of Ice Age and all of the movies that have been in the series so far, it’s a pretty impressive cast, including yourself.  Do you guys end up working as one family?  Can you talk a little bit about how you guys have grown as a “family” and how anything has changed?

Yes, absolutely. The message has always been really beautiful, which is family is the most important thing.  And it doesn’t matter if it’s your biological family or not.  It’s what you make of family that counts.  If we all stick together, regardless of where we come from, we can make this planet a better place and save it. It’s such an appropriate theme for our times isn’t it?  The theme of Ice Age “infected” us all because we all really feel close to each other, with Ray and Queen and Dennis Leary, we always have a great time together.

Q: Since you come from Latino heritage, would you say that you have added some of your Latino traits to Sid’s personality?

Sure! Latin people, we’re very emotionally honest, and Sid has that.  Sid is always, impulsive and goes with his instincts.  That’s part of our Latin culture – we trust our emotions and our instincts above all. I try to give that to Sid, and I try to pass it onto my kids, too.

Q: Sid has an obvious lisp.  How hard was that for you to keep in character?  I believe, unless I’m wrong, that you came up with that idea for it.  Is that true?

Yes.  Well, I came up with about 50 voices for the director, Chris Wedge, because a sloth is slow.  I was talking with a southern drawl and he didn’t like that.  I tried something exotic from India snd he didn’t like anything. So I found some footage on the Discovery Channel of sloths, and a guy with a British’s accent is narrating, saying that sloths store their food in their check pouches until it ferments and the animals fall off the tree.  And I thought, well, let me put some food in my mouth, and I started walking around with a sandwich going, how am I going to come up with a voice for a sloth, I have no idea what the voice is, oh, my gosh, THIS is the voice!  I called the director immediatly, and I said, Chris, guess who this is.  He goes, I have no idea.  I said, it’s Sid the Sloth, I found myself.  And that’s how I found the voice, just doing research.

Q: So in Ice Age, Manny has a little trouble dealing with his teenage daughter and I know you have a daughter of your own.  Are you starting to deal with any of those same issues?  And any lessons Manny and/or Ray Romano taught you?

Ha yes! My daughter is about to hit 13.  And she’s so into music & boy bands. I see that happening, and it’s similar to what Manny is dealing with in the story. How far do you let them go on their own? How much do you reel them in? How much do you control? I’m having to deal with those issues of when to reel them in and how much freedom do you give them. But, most of all, the lesson is to do everything you can to protect their innocence.I always tell my daughter, to embrace your childhood.  It only happens once.  You don’t have to grow up so fast.  Don’t worry, old age is going to come to you! ..

Q: What do you hope that they and other children that see Ice Age 4 will learn?  Is it the message about saving the planet or how we go about it?

Yes! My kids are very “green” and very aware of saving our planet.  They will never litter, never let the faucet run… they do all of it. The biggest message in the film and what I hope people young & old walk away with is that no matter how different we are, what ethnic group, what religion, what race, that we’re all one big family.  And I truly believe that’s what saves our planet. That’s what means the most to me.  I recently held a big screening with all the students from my kids’ school because of that message. The films all have a really positive message.

Now that you know a little more about the Ice Age Continental Drift check out the trailer below in Spanish!

Ice Age´s Sid Goes Global With The Shuffle in Spanish

Join Our Twitter Chat To Help A Mother Out
No Comments