Ingredients For A Thanksgiving Drama: Butter, Bread and Abuela’s Recipes 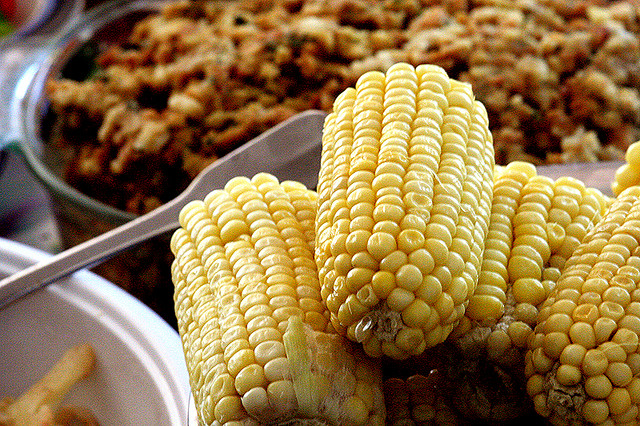 The biggest fights in the early part of my marriage revolved around a recipe. A Thanksgiving recipe. For stuffing no less! It sounds absolutely ridiculous to me now, typing those words out loud — and frustrating that we wasted so much emotion over an innocuous mass of old bread and drippings. But then, it really wasn’t a battle of corn versus white bread to begin with. If this fight had a name it would be Babita v. Hazel, the battle of two people trying to preserve their grandmothers’ legacies.

Babita was my husband Adrian’s grandmother. She lived next door with her husband (named Babito, of course) raising Adrian and his sister alongside their parents. Babita emigrated from Cuba in 1962,  but she adopted the American Thanksgiving wholesale, cooking up the traditional meal — you know, turkey bathed in mojo and naranja agria (sabrosósimo) with black beans and rice. Lacking her own recipe for stuffing she found two. One she clipped from the local Spanish-language newspaper and is rich with apples and nuts. The other is thick with ham. My husband, keeper of the family recipes, now safeguards both inside a worn cookbook from his grandmother’s Havana finishing school. Each year, he pulls the recipes from La Cocina en el Hogar, makes his shopping list, then sets out to find the butcher in his parents’ neighborhood who can ground the ham  just right.

Me, I inherited my recipes from my grandmother Hazel, who grew up on a dairy farm in rural Virginia. The farm produced enough milk each day to fill a cart that the Neale kids and their horse Fancy delivered to town on their way to school. Her family’s recipes are thick with butter, cream, more butter, and a little corn for good measure. They are also sabrosísimo. It is not Thanksgiving without the Neale family, sage-infused cornbread stuffing.

And therein lies the rub. Our first years together, neither my husband nor I could imagine a Thanksgiving without our own family’s stuffing, nor a Thanksgiving with three stuffings. Our kids didn’t care — they don’t even like stuffing. But that didn’t stop the  tension. There may have been a few barbs of ‘my stuffing is better than yours’ in there, maybe. Maybe that was me. I’m not proud of it, but… entire family legacies were at stake.

One year we finally agreed: In addition to the peaches with mincemeat, corn pudding, brussel sprouts, sweet potatoes, cranberry crumble and pie, we would prepare all three recipes. Peace has reigned in our home ever since. I won’t try to persuade you which recipe is best, though I clearly have my favorite. I’ve left two of the recipes at the bottom of the post, in case anyone would like to try them. I will tell you one thing. My husband is in the kitchen right now, preparing stuffing for his office potluck tomorrow. Smells amazing. And the recipe he is using has an awful lot of butter and corn bread.

Babita’s second recipe for ham stuffing is handwritten, and there are a few odds and ends thrown in with the ingredients list (papel de cocina y baño) as if the paper doubled as her shopping list. We’re never quite sure on the portions, so we won’t include it here.

Cornbread Dressing (adapted for the modern cook, and reconstructed from memory by my mother)

Saute the onions and celery in butter or olive oil in a large pan. Brown the sausage.

In a large bowl, mix all the ingredients and either stuff the turkey or bake in a separate pan covered at 350 for 45 minutes, uncover the last 10 minutes.

We usually make a small patty of the stuffing and fry it in a small pan to check the seasonings before stuffing the bird, so that there is time to correct.

They both sound good- I think y’all found the perfect solution! BB2U

I LOVE this story, Marika! Thanks for sharing it! I’m glad you came to an agreement, although I imagine that means a lot of extra work… I’m sure both your abuelas are very proud of you two! Happy Thanksgiving!

Thanks Roxy! I’m just excited to eat at this point. Small breakfast, followed by morning at the park. So much to be thankful for. Have a great one!

I love this!! And I can relate…I like my own stuffing, plain, no exotic ingredients added. I love that you make all three!

Hi, the whole thing is going fine here and ofcourse every
one is sharing data, that’s really excellent, keep up
writing.

Marika Lynch is president of Marika Lynch Communications, which helps nonprofit clients increase their impact through storytelling. Before opening the firm in 2008, Marika was an award-winning reporter and editor for the Miami Herald, where she covered stories from Tallahassee to Bogota. She earned her bachelor's in history and Latin American studies at Georgetown University and served as a Rotary Ambassadorial Scholar in Mexico City. She lives in Miami with her husband and three boys.

View all posts by Marika