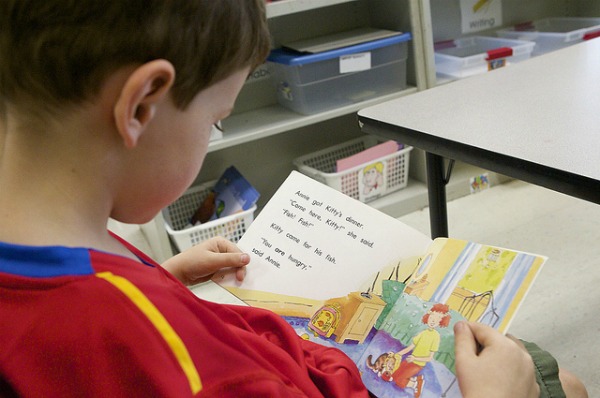 We all have such clear ideas about how we’ll raise our children, even before they’re born. Breast vs. bottle. Co-sleeping vs. crying it out. Homemade baby food. Screen time. And though in some areas I was able to stick to my guns, I was humbled by the fact that many things really didn’t work out the way I’d planned at all.

The same was true when it came to raising my children with two languages. I knew we’d probably use the one-parent, one-language method at home. And though I didn’t go so far as to research it when my boys were born, we live in a major metropolitan area. I knew there were Spanish immersion schools around, and I just figured I’d look into them when the time came.

Then came the early autism diagnoses for both of my boys, who fortunately thrived in a wonderful, full-time special education preschool—Primo was there for two years, Secondo for three. I trusted the teachers and staff there completely, and the idea of leaving the school and venturing into an LRE (Least Restrictive Environment) setting in a regular public school absolutely terrified me. When the time came to think about transitioning to kindergarten a year ago, it was a Very Big Deal.

And when that time came, one year ago, I thought again about looking into our local Spanish immersion schools, but it turned out our (monolingual) home school had an excellent reputation when it came to special education. And my priorities were completely shaken up, and I knew that there was absolutely no contest. I want my children to be bilingual, to be sure. But good special education services are crucial. Those services have made a world of difference in their lives, have helped them make such unbelievable progress early on, when it is so important.

I didn’t even look into the Spanish immersion schools.

This week, my boys will be done with kindergarten. Despite some significant challenges early on and a few adjustments, they have both done beautifully. At their last IEP (Individualized Education Program) meeting a couple of months ago, special education services for both of them were scaled back significantlly, and it was a move we all agreed with. I could not be happier with how well they’ve done in school, and though they face plenty of social challenges, they are in a good place, with good people and great support.

Where does this leave them when it comes to their Spanish? I am happy to say that even after a year in an all-English school (plus aftercare), they still easily default to speaking to me in Spanish. The day may come when they will rebel, but it hasn’t happened yet. I can tell that the gaps in their vocabulary in Spanish — about the solar system, the life cycle of a plant — are becoming more pronounced, due to all the English they get at school, but they constantly ask me how to say things in Spanish and we either look things up in the dictionary or find a book on the subject in Spanish. They go to a community Spanish school on Saturdays, and I teared up at the acto de clausura as they danced onstage to El condor pasa, a little lost in the choreography but willing to be led by the more tuned-in little girls in their class.

We received a survey from the school to fill out and return the other day. Primo, who leaves nothing unread, found it on the table. “What language is spoken in the home?” he read. Then he turned to me. Mama, ¡en casa hablamos inglés Y español! he proclaimed gleefully.

Proudly, I would say.

{Photo via: US Department of Education}

6 Lessons About Raising Bilingual Children from a Non-Native Speaker

My Bilingual Boys’ Speech Progress
Saturdays are for Spanish School
Back to {Bilingual} School: Spanish for Homeschoolers
7 Comments

What is the saying? Never tell God your plans… I have often thought that even though my fiance and I want to raise kids in Colombia that if any of our kids had special needs, we might have to change that because of the lack of services available. I hope to get certified in Special Education soon because its such a need here and hardly anyone is trained in providing special ed services.

Great post! My husband and I always thought we’d enroll our son in a dual immersion school. The possibility is still there, but since my son had an IEP due to speech delay, he will now be starting a preschool program in our school district. Assuming the preschool and the special education services turn out well (as we hope!), it will be difficult to decide whether to pull him from this district or put him in a dual immersion program. We specifically purchased our home in an area with a very good school district, so now to think about putting him in the dual immersion school (not in our district) will be a tough choice. My husband and I practice the ml@H method and my son only speaks Spanish, but the dual immersion program does appeal to us as well. We’ll see what happens. Good luck to your boys!

Such a beautiful, thoughtful article. A Spanish immersion school might be a good idea at a first glance, but it might not suit your children’s needs. You have found a good quality school for your children, that is important! I’ve read once that you can’t have them eat carrots and speak Spanish at the same time. I think it’s even more true in your case.The fact that your children have all the support they need now might them become bilingual.

Because the best academic programs in this country are in English, and we want the best for our children, I agree with what many successful cultural/ethnic parents do for their children here in the USA. They send their kids to Saturday school or afterschool programs, and speak to their children at home in their heritage language. I went to all English schools and spoke Spanish at home with my parents, but we could not afford any Spanish language enrichment programs, nor did our schools offer them. Even though my parents did not have many years of formal education in Mexico, they provided us many trips to the library, purchased books in Spanish, and always encouraged us to read in Spanish so we would have exposure to academic Spanish. Now my siblings and I can proudly converse and read fluently in our heritage language, but we our English dominant, as is expected in the USA. Your children can be be bilingual if provided the resources, support, and encouragement at home!

I believe Kimberly, that you made a wise choice for your situation, choosing to address the early autism diagnoses over putting your children in Spanish Immersion classes.
We do not have Spanish Immersion classes here now, where I live.
I did work as a Bilingual/Newcomer/ESL teacher for 9 years in the public school. I saw first hand how children, new to this country struggle with learning English, especially if their parents’ dominant language at home is Spanish.
I also had kids with Special Needs. We sought IMMEDIATE services for them and thankfully got them.
I am the Mother of a Special Needs Child (Down Syndrome) , who now at 18, is at home with me. I am “Lifeskilling” her.
I decided at the very beginning that even though the people in the elementary schools were saying that the fact my husband spoke Spanish to her, that it would hinder her learning English, that I would NOT follow that advice.
Why??? Her father is Mexican!!! There is no way I was going to make my husband speak English to suit someone else!!!
I have never been sorry. My child understands English and Spanish perfectly. She and her daddy have the most beautiful relationship I have ever seen between a father and daughter.
She speaks in one or two word terms. In language output she is on a two to three year old level. This is very fine with me. She is being the person God meant for her to be!!!!!
Juana Veronica

﻿Good day!
I just discovered your site: Why I Decided Against a Spanish Immersion School for My Bilingual Boys | SpanglishBaby™ when I was surfing around
stumbleupon.com. It looks as though someone appreciated your blog so
much they decided to bookmark it – good job!

Leave a Reply to Kathy