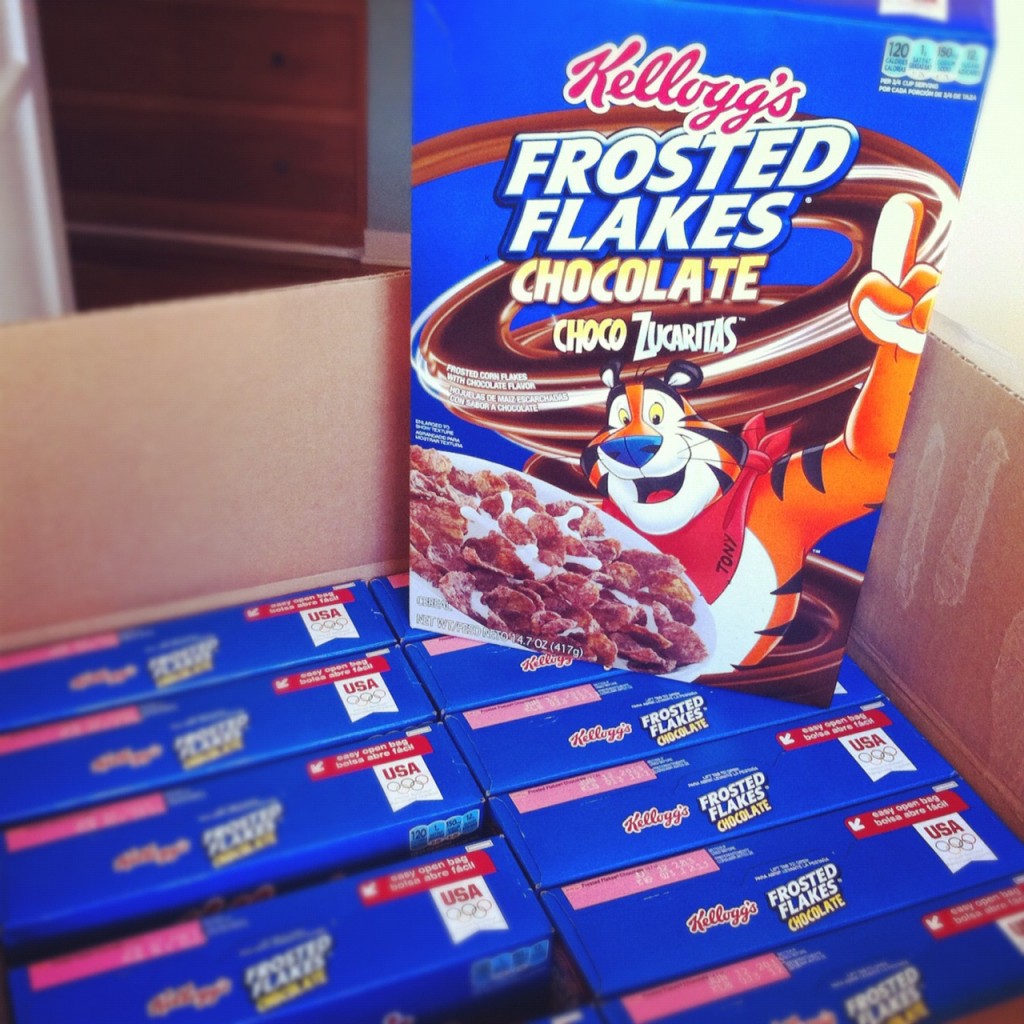 Last year a friend sent me a tweet with a picture of some Kellogg’s Frosted Flakes Choco Zucaritas she had found in a Mexican market in her city. She knew I would “get” the feeling of nostalgia and tinge of excitement to be able to buy in the U.S. a cereal we had eaten in Mexico. Then I read a post from Maura of The Other Side of the Tortilla about how excited she was that our very own Tracy – of Latinaish.com fame – had traveled to a conference with a box of Kellogg’s Choco Zucaritas to give to her because she knew how much she loved them. How’s that for bonding over a box of cereal?

It’s that nostalgia for certain foods you might even take for granted when you live in another country that you find yourself missing once you move away. Funny how roles get reversed because when I was growing up in El Salvador we would get crazy excited if my mom brought back a box of Froot Loops from a trip to Houston.

Who would’ve known that almost a year after that tweet and Maura’s blog post I’d be receiving a box full of Choco Zucaritas straight from Kellogg’s with a note saying I had been sent one of the first boxes off the line on their way to markets all over the U.S.? No longer would we have to look for the ones imported from Mexico, these were meant for the U.S. Hispanic audience that wanted them so much that they were heard. Those boxes were so special because to me they mark a symbolic moment of the role of Latinos in America. It says that a slice of who we are is following us here. It says that we continue to transform the American table.

While we don’t eat a bowl of Choco Zucaritas every morning for breakfast, we do savor the special treat and are glad to have the option to do so…and the many boxes I thought would last us a whole year and I’d get to send to friends, never imagining my husband would go through most of them in less than four months!

Oh, and you know what’s even cooler? The text on the Kellogg’s Choco Zucaritas box is all bilingual! I might even dare say it’s the first bilingual (Spanish/English) cereal box in the U.S., but I need to verify that before I state it as fact. Regardless, this is one cereal box my budding bilingual reader can practice her español with while having a special treat!

Have you tried Choco Zucaritas or seen it in a store near you? You can search on Kelloggs.com for a retailer near you that sells it, or you can even order it online. I found them on Amazon!

Disclosure: We are proud to be part of the  Kellogg´s Champions of Great Starts bloggers and grateful to have Kellogg’s as a SpanglishBaby sponsor.

this is so funny, having been born here in the us i am just used to cocoa krispies. My man came home with this box so excited and i didnt think anything of it. Now i understand his excitement

Oh, yes…my husband still can’t get over it!

What Ana, You Husband still now can’t get it how funny? As like mine husband always told me to didn’t give it to my kids any time it. But I always try to give it to my child and they like it too much.