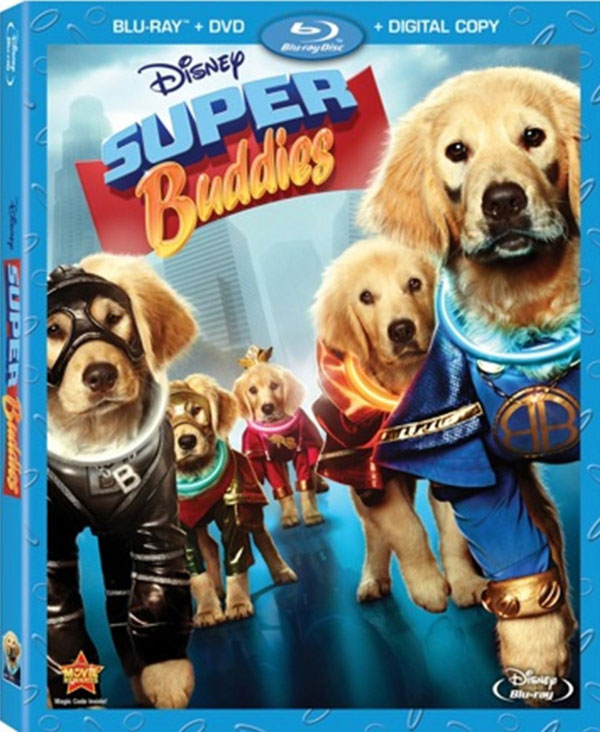 Disney Home Entertainment is at it again with their adorable team of superhero dogs. Disney’s Super Buddies is sure to be a hit with your small kids. Packed with adventure, these furry friends band together to fight crime and learn some valuable lessons along the way.

My three year old daughter is obsessed with animals, so this family film was perfect for her. Being her first exposure to the Buddies franchise, she was equally enthralled by their speaking abilities and out-of-this-world cuteness. With a fun mix of suspense and positive messaging, I enjoyed watching Super Buddies with her too. Each dog has a personality that is personified from their owner, five friends who are fighting an alien invasion that threatens to take over Earth. An ordinary day at Fernfield Farms turns extraordinary when the talking puppies discover mysterious rings that grant them each a unique super power. The rings each grant them super powers that help the pups save the day, but not before learning a valuable – “You don’t need super powers to be a super hero!”.

“Disney’s beloved and adorable ‘Buddies’ are back in a hilarious all-new movie for the whole family — ‘SUPER BUDDIES’ debuts August 27, 2013, on Bluray Combo Pack and DVD.  An action-packed canine adventure, ‘Super Buddies’ stars the world’s most adorable talking puppies – Rosebud, B-Dawg, Budderball, Buddha and Mudbud, as caped crusaders em’barking’ on their biggest adventure ever.”

We are giving away one copy of Disney’s Super Buddies to FIVE lucky winners! All you have to do is leave us a comment letting us know who you’d like to share this movie with. The, enter the Rafflecopter below.

I am already a subscriber to your newsletter!

I Would Share With The Kids, Perfect For Family Movie Night!

I would love to share this movie with my sonswho don’t yet know the joy of owning a doggy.

I would love to share this movie with my sons, my oldest is desperate to see it!

My nephew would love this movie!

I would love to share this with my grand daughter.

I’m am subscribed to the SpanglishBaby newsletter with this e-mail address:

Excellent sijte you have here but I was wondering if you knew of any user discussion forum that cover the same topis talked about in this
article? I’d really like to be a part of online community where I can get opinions from other experienced people that share the same interest.

If you have any suggestions, plkease let me know. Kudos!

I am already subscribed to the newsletter.

I m subscribed to the newsletter

My two boys would love this movie.

I would love to share this with my boys.

My daughter loves DOGS, she will love this.

When someone writes an post he/she retains the plan of a user in his/her
mind that how a user can know it. Thus that’s why this post is
amazing. Thanks!