Disney “Planes” flies into theaters later this week  and, here at SpanglishBaby, we are super excited! On behalf of the SB familia, I was invited to visit the DisneyToon Studios  for a behind the scenes view at the making of “Planes” and even interviewed it’s Director and Producer. Full review of the movie is coming soon, but needless to say, I am SUPER excited for you to check it out!

One the endearing characters of the film is Dottie the mechanic, voiced by Teri Hatcher. Unfortunately, Teri was not feeling well (she was really sick!) and was not able to attend with us in person. However, she graciously phoned in for a conference call to answer all our questions on her experience voicing Dottie, her thoughts on “Planes” and even a little but about motherhood. Here are some of my favorite parts of this hour long conversation with Teri Hatcher, voice of Dottie the mechanic… 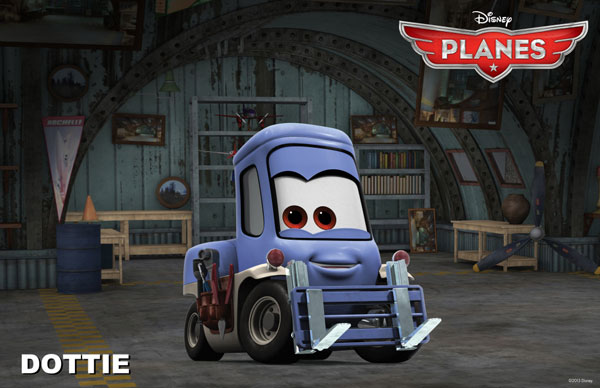 How is it playing an animated character versus an actress in a movie or on TV?

Teri: Having done a few of them now, and then a little bit of a range of voice characters in different projects, you know, I think initially, when you sort of imagine or fantasize about getting to be a part of a big Disney movie- at least as I did in, in my acting career before I had the opportunity- you kinda think you’re gonna end up doing some sort of cartoony, you know, squirrel voice or something, and which is really fun and would be fun to do. I think, for this character- for Dottie, you know, I’m being as authentic and trying to be as persuasive, and as empathetic, and listening, and just feeling from the emotions all the same sorts of traits in a character that I would have if you were filming my face and my body. The sort of divergence, I guess, is that I get to show up not in hair and makeup; not worrying about any physicality, and really just, you know, relaxing into my voice, and and just trying to tell the story through my voice.

Can you share with us your favorite part of “Planes”?

Teri: So I love [it] all, everything in it, but I think, my favorite scene for me of, for my character and what just makes me makes me laugh remembering the journey of filming it was the scene where Dottie is first telling him that he can’t he can’t fly, and then she just sort of does this demonstration of what’s gonna happen to him if he doesn’t fly. You know, he’s gonna go to the ground and smash all the kids in the orphanage.  It just, it makes me laugh and when I watch it with a group of people, everybody laughs, and so I guess that’s one of my favorites.

What was your daughter’s reaction to hearing that you were doing this role?

Teri: Oh, her first reaction is, I wanna be a voice animator! It’s a pretty fun job, I’ve gotta say. I also did all the mom voices in Coraline, and so I guess that was really my daughter’s first exposure to seeing her mom, or hearing her mom put a personality behind the image of a character. She’s just proud of everything I do.

What was it like being offered a Disney film?

WOW! What an awesome interview and opportunity. I can’t wait to read the review!

Thanks so much for sharing!

t’s a basic long-distance call for everyone and it beats the alternatives of
trying to bridge five three-way calls together to get 15 people
onto a conference call doesn’t it? Not to mention all
the valuable features we offer including conference call recording,
online conference management and easy host dial-pad controls to name
a few.