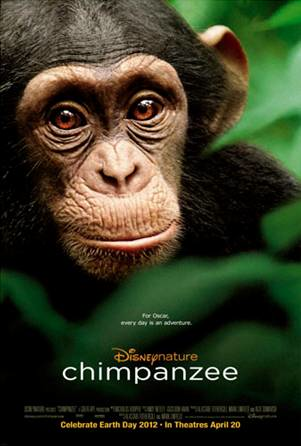 Weeks ago I got treated to a screening of Disneynature´s “Chimpanzee;” little did I know, that being inside this theater would feel like immersing myself into the private lives of a group of African primates with emotions that felt so close to ours. I got a tiny peek of what it  looks and feels like to be inside the lives of a family of chimps which have to be savvy, courageous and united just to survive. I also got to experience the love of a mother/son relationship that as humans we believe only belongs to us.

Oscar, the chimp that guides us through the “Chimpanzee” journey, is a curious, lovable, relentless baby who is still learning how to navigate the rules of life for his own survival. He relies on his mom as a role model and as a pillar of safety. But one day, he loses his mother and is left alone with no one to care or protect him.

The directors, Alain Fothergill and Mark Linfield and their team, were able to capture the process Oscar goes through during the weeks that followed the loss of his mother and him trying hard to find food and a companion to care for him. After being rejected by every other member of his family, we watch in awe how little Oscar decides to  approach the eldest chimpanzee, the least likely to look after him.

What resulted was some magnificent and unique footage of a beautiful relationship between the youngest and oldest chimps which blossomed into nothing ever before seen on film.

This movie is a special treat for any family to enjoy on Earth Day and beyond. It opens today on theaters and you should not think twice about going with your kids since it will open up all types of beautiful conversations about relationships between humans, animals and nature.

Take a look at this video and meet the lovable Oscar:

Disneynature has teamed up with the Jane Goodall institute (led by world-renowned primatologist and UN Messenger of Peace Jane Goodall) to save chimpanzees and will contribute $.20 per ticket sold during the film’s opening week to the Jane Goodall Institute for the Disneynature Tchimpounga Nature Reserve Project. Learn more at disney.com/chimpanzee or on Facebook.

Thanksgiving: A Multilingual & Multicultural Affair
What Does ‘Inspire Care’ Mean to You? {Video}
5 Eco-Conscious Ways to Enjoy the Summer En Familia
1 Comment

Given that people have different lifestyles and levels
of fitness, there are many programs where“experts” give general
rules about what to do in the gym to gain muscle or just fitness in general.
Doing these physical exercises will help reduce your cravings and the stress associated with them by refocusing
your consideration on the breathing exercise, not your cravings.
Their club provides a huge state of the art equipment, saunas, masseurs, nutritionists,
beauty therapists and the best personal training programs
which will help you to get the best out of them.