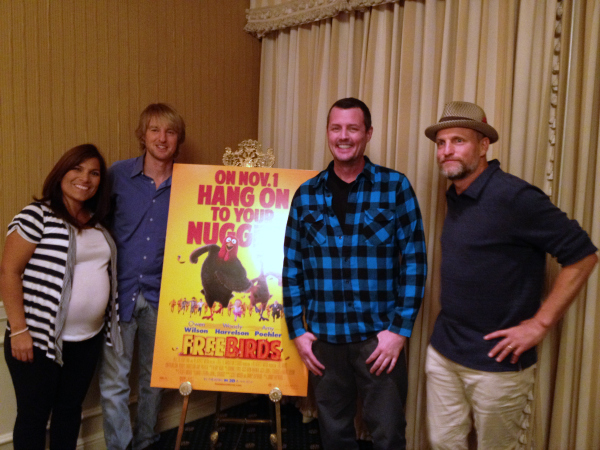 The new animated film “FREE BIRDS” is landing in theaters on November 1st.  The film arrives just in time to save a few turkeys before Thanksgiving.  SpanglishBaby had the opportunity to attend a “Free Birds” roundtable interview with Jimmy Hayward (Film Director) and male voices Owen Wilson (Reggie) and Woody Harrelson (Jake), along with being able to attend a preview of the movie.

The movie is sure to be a “Fall favorite.”  This hilarious, adventurous comedy is for audiences of all ages.  The premise is that two turkeys from opposite sides of the tracks must put aside their differences and team up to travel back in time to change the course of history in order to get turkey off the Thanksgiving menu for good.

Director Jimmy Hayward shared the main message of the movie. “You’re absolutely part of something bigger than just yourself.  It’s not about turkey or being a vegan or anything like that, because we all know that turkeys don’t talk–well, at least not to us.  And they don’t fly in time machines named Steve. Reggie is selfish and lazy, and Jake is this driven guy — Reggie really learns that he’s part of something bigger.  Just because you get rejected in your life doesn’t mean that you shouldn’t strive to be part of something that’s important–which is being part of the flock.”

I also got a chance to chat with Owen Wilson and Woody Harrelson.  The chemistry between these two actors is undeniable, which explains why they work so well together in the movie. I must admit, at points during the interview it was hard to tell if they were actually joking or not, except when they started talking about their kids which peaked the interest of the “mom”  in me.

Owen Wilson on what kind of dad he is:

“Well, they say that the number one thing is to be consistent, and I guess I try to do that a little bit.  But, I actually remember you (to Woody) saying that a big thing, right before Ford (his son) was born is just to hug your kids a lot, and I do that, which comes very easily because he’s very hug-able.  And so, it sounds corny, but you can’t hug your kids enough or give them that confidence that they’re loved.”

Woody Harrelson on a “Dad’s fails”:

“My “Dad’s fails” have to do with if I’m working and can’t go to a play they’re in, that drives me crazy.  I have one coming up where my daughter Ophelia is in Hamlet.  It’s a problem, but I think I’m going to work it out.  I think I’ll be able to go.”

This November 1st don’t miss this funny and adventurous comedy for audiences of all ages. 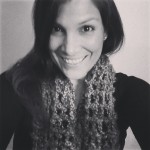 Carla Gutierrez was born in Lima, Peru. She is the founder of Notas De Mama a Spanish blog created for Hispanic moms living in the United States. At Notas de Mamá Carla shares her daily life, family outings, recipes, product reviews and DIY projects. She enjoys crafting and decorating her home, while challenging herself to do it on a budget. Carla loves being a wife and a mom, and raising her 3 year old son in sunny California. She loves teaching her son about the Peruvian and American cultures, and is proud that at age 3 he is fully bilingual. Connect with Carla @notasdemama .

I simply wished to appreciate you once again. I do not know the things I would’ve tried without the secrets shared by you relating to such subject. This has been a difficult difficulty for me, nevertheless being able to view a well-written avenue you handled that made me to weep for joy. I am just happy for this help and thus wish you find out what an amazing job you’re accomplishing educating others using a web site. I am sure you haven’t encountered any of us.

I enjoy the dear details anyone supply with your articles. I most certainly will search for your blog site look once more below generally. I will be rather i might be educated a great deal of fresh things right here! All the best ! for the!

I was so bummed we didnt get to eat here the last time we went to Disneyland California. This one is definitely on my must do list next time.

This is extremely amazing, You’re incredibly qualified writer. I’ve became a member of your current feed and appear forward to with quest of extra of one’s exceptional post. Also, I have provided your web blog in my web sites

If some one wants expert view concerning blogging after that i suggest him/her to visit this webpage, Keep up the pleasant work.

I am no longer certain where you are getting your info, but great topic. I must spend some time studying more or understanding more. Thank you for excellent information I used to be searching for this information for my mission.

Ok so I am thinking about removing my website from Tumbler and get it to a WordPress blog. I think this is a wordpress site right? If it is, may I ask where you got the theme? Thanks a bunch!

You ought to take part in a contest for one of the greatest sites online.I’m going to highly recommend this site!

Hmm i hope you don’t get annoyed with this question, but how much does a website like yours earn?

Woah this weblog is excellent i like reading your articles. Keep up the great paintings! You understand, lots of people are looking round for this info, you could aid them greatly.