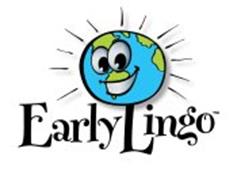 With the summer quickly approaching, I know that I, for one, am trying to collect quality DVDs for my son to watch so that I don’t feel quite so bad about plopping him in front of Netflix whenever the afternoon thunderstorms hit. The best kind of show/movie is one that is secretly educational! While I love being able to turn on my son’s favorite animated films in Spanish, he needs something fresh and interesting. Early Lingo’s Spanish DVD Set  provides just that. 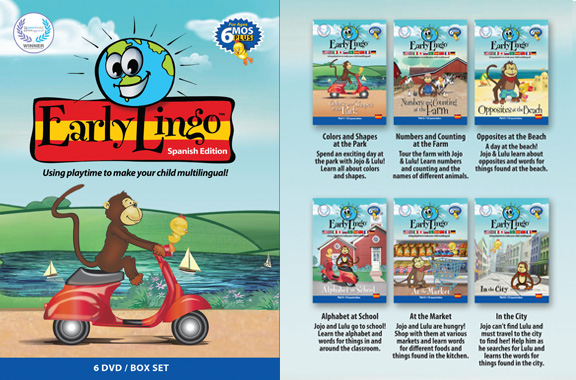 There are 6 DVDs in this comprehensive box set, each containing the adventures of Jojo (a monkey) and Lulu (a duckling) in different parts of the city. They go to places like the park, the beach, the market, and school, all the while carrying on simple conversations in Spanish. The narration and music style reminds me somewhat of a Baby Einstein DVD: solid repetition and a pace that keeps kids engaged. I also enjoy the integration of animated characters with real-life scenes.

Though the Early Lingo immersion method is intended for children as young as 6 months, it clearly carries through the preschool ages, since my 5-year-old was just as enthralled as an infant would be. Early Lingo recommends using the DVDs for children up to 9 years. Because of this versatility, I would suggest them as tools for elementary Spanish teachers as well as parents.

Here is a preview of Opposites at the Beach:

We are giving away one Early Lingo 6 DVD set in the language of your choice. Languages available include: English, French, Spanish, Italian, Mandarin, and German. All you have to do is visit the Early Lingo Spanish Edition page, or whichever language you prefer, and leave us a comment telling us which preview video you enjoyed most and why. Then enter the Rafflecopter below.

I really liked the Spanish video preview the best.

I like the Spanish Colors and Shapes at the Park because it is so different from any other learning tools I have seen.

I like numbers and counting. I am an email subscriber.

I’m always looking for more little videos for my preschooler and she would really enjoy these I think! I especially liked the mercado one. I wish they had more advanced levels as well, as I find medium-level conversational videos to be the resource most lacking for helping my daughter with the acquisition of a second language. Gracias!!

Oops…as to why I like the mercado one best, I enjoyed the context of the monkey starting to cook, realizing he needed a list, then going off to the market. I find I end up speaking Spanish to my daughter most often in the kitchen, so perhaps that’s why I enjoyed it best! But they’re all good.

This looks so great and I know my daycare kids would
love this DVD. The one I really liked was the Alphabet at
school preview in Spanish . It’s very clear. I loved that one because it teaches the kids
Spanish verbs such as èl and ella which is really good, and the
words of what the children are doing on the playground. This is
a very great learning tool for my bilingual daycare. Thank you
for sharing this

I love anything farm! Numbers and counting at the Farm!

I liked the “At the Market” video best. It would be a great start to a full interactive lesson on food…shopping and cooking a Hispanic meal together. It would be memorable!

I really liked the Spanish colors and shapes the best because that is what I am currently working on with my 2 year old! These videos would be really helpful at home and I would like to tell the preschool where I teach about them as well.

love these – we previewed Opposites at the Beach and my 5 year old loved it!

I liked The Alphabet at School – Spanish preview best

I liked the alphabet at school one

I liked the Spanish In the City video.

I liked the Opposites at the Beach since I love the beach but they are all great.

I liked the Mercado, so many vocabulary and so much fun.

Mercado is my favorite. I love that the videos use bright colors, words appear on the screen to support reinforcement and the speaking in the audio is very clear and easy to understand

This is quite simple. It is very basic vocabulary-focused. It would probably be about right for teaching reading skills to my 3 year old. It would be fine for any age if it were new vocabulary or a new language. My 5-year and older who already knows Spanish and can read would probably lose interest quickly since there is primarily repetition of single words. For that reason, I would probably get the Spanish for my 3 year old, or venture into French, German or Chinese, where both kids would have new slow exposure to a less familiar language.

The Spanish ones of course. Especially the Alphabet one!

I was already a subscriber!

I really liked the opposites at the beach preview. Very sute and simple great for beginners and my boys love monkies!