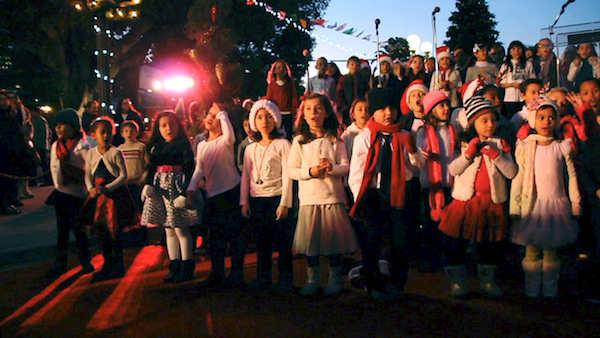 La Plaza Olvera is where the heart of Mexican culture in Los Angeles beats. This is where all the tourists go to in downtown to get a feel of a traditional plaza with its mercadito, churros, tamales and obligatory knick knacks to buy. But Olvera Street is more than a tourist spot, it’s a historical landmark known as “the birthplace of Los Angeles,” or Nuestra Ciudad de Los Angeles.

So imagine how thrilled we were when Camila’s Spanish music teacher at school — which so happens to be Sara of Music with Sara! — told us the school’s Spanish immersion students had been invited to sing at the Plaza Olvera’s tree lighting ceremony! Of course we signed her up and she was super excited.

They sang a slew of traditional villancicos, as well as adored songs like “Cómo la Flor” and “Tómbola.” The kids were just amazing and our hearts melted every time Sara would get up to let the audience know that these kids are learning in two languages and most of them don’t even have the luxury of speaking Spanish at home. Yet there they were, singing their hearts out en español y en la Plaza Olvera.

Below are a few Instagram videos I made, but I also share more pictures of this beautiful moment, as well as of the other three music and ballet performances my daughter had the last few weeks, over in this post on my Babble column. She’s sure kept us busy y muy orgullosos!!

Week in Links for #BilingualKids — Dec. 20

Want to Meet Up With Us For Some Music With Sara?
Teach Your Bilingual Kids Traditional Children’s Songs in Spanish
Watch: Day of the Dead Calaca Face Painting {Video}
41 Comments

Spectacular web site. Many handy facts listed here. My business is delivering it to many close friends ans in addition expressing in delightful. And positively, because of the sweat!

Thank you, Susan! And loved doing CNN Latino with you!

It really is an awesome in addition to very helpful item of details. I’m fulfilled that you simply shared this helpful facts with us. You should keep us well informed like this. Many thanks for spreading.

Excellent items from you, man. I have consider your stuff prior to and you are just too great. I really like what you’ve bought right here, really like what you’re saying and the best way during which you are saying it. You are making it entertaining and you continue to take care of to stay it smart. I can’t wait to read much more from you. This is really a tremendous web site.

An intriguing discussion is worth comment. I do believe
that you ought to write more about this issue, it may not be a taboo
subject but usually folks don’t talk about these issues.

To the next! Kind regards!!

You have mzde some decent points there. I checked onn the net
to find out more about the issue aand found most people will go along
with your views on this website.

Hello to all, the contents present at this website are actually amazing for people knowledge, well, keep up the good work
fellows.

Hey there, You may have completed a terrific occupation. I’m going to definitely delicious the item plus in the watch propose so that you can my friends.. selfless I’m certain are going to took advantage of this web site.

Superb blog! Do you have any recommendations for
aspiring writers? I’m hoping to start myy
own website soon but I’m a little lost on everything. Would you propose starting ith a free
platform like WordPress or go for a paid option?
There are so many choices out there that I’m totally overwhelmed ..
Any tips? Thanks a lot!

After exploring a few of the articles on your site, I honestly appreciate your technique of blogging.
I book marked it tto my bookmark website list and wil be checking bacxk
in thee near future. Please check out my web site ass well and
tell me your opinion.

A lot of thanks for your entire effort on this web page. My mother really loves working on internet research and it’s really simple to grasp why. My partner and i know all regarding the powerful method you present valuable tricks via this blog and even invigorate contribution from visitors on this issue so our favorite simple princess is without a doubt starting to learn a great deal. Have fun with the rest of the year. You are carrying out a really good job.