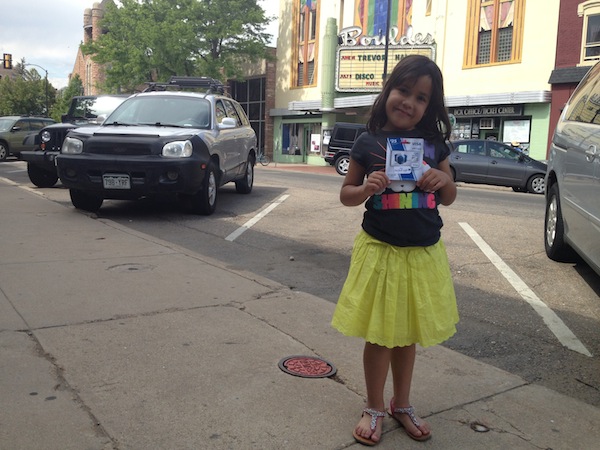 The reasons for raising a bilingual child are varied. For me, it’s mostly because I can’t fathom my children not speaking my mother tongue, not being able to communicate with my family back in Peru or my husband’s family in Puerto Rico. But it’s also because of all the proven cognitive benefits of speaking more than one language as well as the financial advantages.

I recently got the opportunity to show my 6-year-old daughter Vanessa exactly how it pays to be bilingual. A friend told me Rosetta Stone — the computer assisted language learning program — was looking for native Spanish-speaking children between the ages of 5 and 9 to do some research on speech recognition technology in kids. Apparently, they’re currently developing a kid’s program.

According to the details I got, Vanessa would be given the text and audio in Spanish for several sentences and all she had to do was repeat so her voice could be recorded. In exchange, Rosetta Stone would give her a $25 Visa gift card. It sounded like a pretty simple task, so I signed her up and then explained it to her. When I told her she would actually get paid for her participation, her eyes opened wide. Although she doesn’t really understand a lot about money just yet, she knew $25 was a lot. Since she had been bugging me to buy her some toys, she was ecstatic.

Once we got to the Rosetta Stone office in Boulder, we were taken to a room with a computer and Vanessa was given a set of headphones with a microphone. Just like it was explained to me, Vanessa would hear a sentence (and see the text on the computer screen) and all she had to do was repeat it so her voice could be recorded. At first, she was pretty shy, and her voice was barely audible. But after the first few sentences she realized there wasn’t much to it and became more confident, as you can see in the video below.

The whole thing lasted one hour and Vanessa did great. She stumbled over some of the words, especially when it came to large numbers, but overall she did amazing and I was beaming with pride. Once she was done, she was given her $25 gift card and couldn’t contain her happiness. I wasted no time telling her that this was only possible because she’s bilingual and I think she actually got what I was saying.

Rosetta Stone in Boulder, Colorado is still looking for more native Spanish-speaking kids interested in participating in their study. If you’d like more information, you can contact Megan Sills at msills@rosettastone.com.

The Summer of Discovering and Becoming Frida Kahlo

Is My Daughter Shy? Or Is She Not Bilingual Just Yet?
The Everyday Beauty of Bilingualism
How Truly Bilingual is my Daughter?
12 Comments

Tell her I sent you and let me know how it goes! I’m sure Mikey will do great!

I came here via the Pinterest Scavenger hunt and I am very glad I got a bit lost. This is a great story.

I was wondering if I could feature it in the upcoming Multlingual Children Blogging Carnival that I will be hosting at the end of the month. The theme is Hidden Opportunities and this seems like a great post that would fit in with the theme. If you need any more info please get in touch.

Nice post. I was watching continuously this site and I’m impressed! Extremely useful info especially the last part I care for such info much. I was looking for this specific info for a long time. Thankyou and best of luck.

Hello, I enjoy your weblog. Is there something I can do to get updates like a subscription or something? I’m sorry I am not familiar with RSS?