SpanglishBaby Dads: How I Fell in Love with Spanish & Became a Bilingual Father 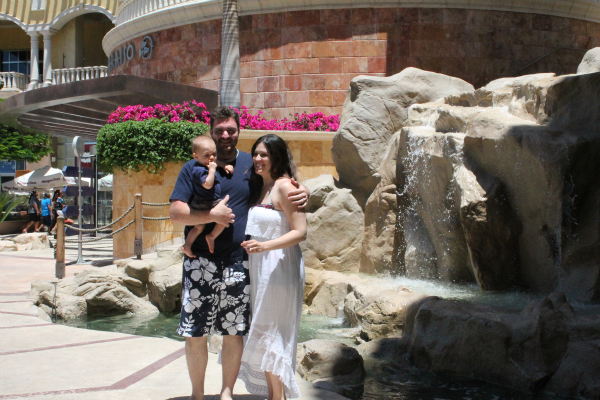 Editor’s note: We’re spending this week celebrating dads raising bilingual kids with guest posts written by them in honor of Father’s Day. We love having the dad’s perspective and hope this series encourages other papis to share their stories with us.

On November 11, 2009, I was just another young man trying to make his way in the world. Some of us college-aged kids from church were starting a small group, and we were kicking it off with a little get together at one of the leader’s house. His wife is from Ecuador. They spoke Spanish, and I thought it was great, but didn’t give it much thought. I had studied Spanish in high school and a few years in college, however the years since had put quite a layer of rust on my not-so-great-to-begin-with skills. That night, I wished I had paid more attention in Spanish class.

When she walked in, I knew it right away. She was beautiful, different, unique and full of life. The only problem was… she spoke Spanish. Not English. She was in the U.S. visiting family and studying English. She had not quite mastered it yet.

We tried to chit-chat but it was horrendous. I knew enough Spanish to attempt to speak it, but she couldn’t understand a word I said due to my accent. We exchanged Facebook info and I tried to give her directions home. I was pretty proud when she took off going the right way. Months later she would admit to me she had absolutely no idea what I had said. I guess my pointing was the most effective communication that night. The rest, as they say, is history.

From day one, after meeting her, I spent a huge amount of time and energy learning Spanish. I knew this relationship was going somewhere, and when it did, there would inevitably be kids. I knew I would want to be able to pass on to them their mother’s language and culture. Sort of. Ok, I wish I had that kind of insight. It wasn’t quite like that. The majority of the motivation at the beginning, if I’m being honest, was to be able to communicate with the mother of my future children. That was step one. The subsequent steps perhaps transpired a bit more like I described earlier.

As I learned more Spanish, and learned more about my future wife, I fell more and more in love with the language, the culture, and the satisfaction it brought to connect with her on that level. We have a lot of friends where one spouse speaks the minority language and the other spouse doesn’t; they use English as a medium of communication. There is nothing wrong with that, but I personally believe in Nelson Mandela’s famous saying:

I wanted to speak to my wife’s heart and to be able to understand her and my son when they have those moments. Therefore, Spanish learning was high-priority (and still is… you never really LEARN a language). Fast forward three and a half years later and we currently live in the heartland of the U.S., Illinois, and are raising our 11-month-old child, Liam, bilingual. There was never a question as to whether or not we were going to raise him bilingual, only a question of how. He was going to be bilingual regardless. We chose the mL@H method.

Learning Spanish, and interacting with Mexican culture, has literally changed my life. I can’t even fathom not teaching my son Spanish. I’m jealous of him! He’s going to be a true bilingual from birth and have what neither his mom nor I did. We both learned our languages as adults and scratched, clawed and fought our way to fluency. Spanish is now basically second nature to me, but it’s still not quite like English. I don’t like that. I wish it were, but it isn’t. It will be, or at least it can be, for him.

I can’t wait to open his eyes to all the wonders that are out there. To be able to give him, at a young age, a broader perspective on everything from different words to different worlds. He won’t be that 20-something who knows nothing about life. We’re going to travel, learn and raise him in a culturally and linguistically diverse way so he has the keys to unlock his heritage on both sides.

Passing a language down to your child is, in my opinion, an incredibly important part of being a parent. Especially when one of the parents identifies so much with that culture and language. My wife lived in Mexico for 29 years. Mexico will live in her, and in our family, forever. It will take more than a generation to remove us from it, if ever. We will hopefully instill in our son the importance of his culture, his people and his heritage. That is one of the most satisfying and rewarding things I will be able to do as a father; celebrate our family where it is, where it comes from, and where it is going. The challenge will be in making our son understand where he fits in both cultures. A running joke in our house is “allí se va.” We use it, loosely translated, as something like “here goes nothing!” That basically says it all.

Jeffrey Nelson blogs about being bilingual, raising bilingual children, and all things bilingual at Living Bilingual.com . He and his wife, Gyovanna, are currently raising their 11-month old child, Liam, as a bilingual in English/Spanish. Jeff loves the fact that his son will grow up bilingual and bicultural, a long way removed from his own past growing up in North Dakota; the antithesis of the bicultural childhood.

What a beautiful and inspiring love story! Your boy has a lot to look up to and the gift you’re making an effort to give him is so huge.

Thank you for the opportunity! I hope you all enjoyed it.

Jeffrey, thank you for sharing your story! It’s wonderful that you cared so much about your wife and your son that you learned Spanish. Being able to use the mL@H approach will surely help preserve the Spanish language and Mexican culture that you are fostering at home. You and your wife should give yourselves lots of credit for being bilingual. Feeling like you are not “truly” bilingual and knowing you can’t do all of the same things in each language is normal. If you have some time, pick up a copy of Francois Grosjean’s Bilingual: Life and Reality. It discusses growing up bilingual as well as becoming bilingual at an older age (as you, your wife, and I did) and what to expect. Keep it up! I hope to hear more from you and your family.

Thanks Ryan!
I’ll have to check out Mr. Grosjean’s book. I’ve been in contact with him via email – he seems like a great guy.
It’s nice to know there are others out there raising children in non-native languages.
And you’re right… my wife does deserve a lot of credit

You may be jealous your son will grow up truly bilingual…but I am jealous of families that have one “real” (or more) bilingual parent as my husband speaks no Spanish, and I speak only low-intermediate level. Certainly not enough to reinforce my bilingual daughter’s language immersion education. Your son is very lucky you and your wife are so dedicated to giving him this special gift. Great article, I enjoyed it very much!

Kathleen,
I agree! My wife is a true blessing. While I recognize the difficulties of not having a ‘native’ speaker in the home, or at least I can imagine, it’s important to not lose hope! We have friends who are both as American as it gets with no Spanish backgrounds until the usual Spanish in high school and then on in college. They have a five year old and a 3 year old who both speak fluent Spanish and are raising them with ml@H. Their house is like on giant, walking language resource! Whiteboards everywhere, books, movies, etc… but they are doign it. It definitely can be done.

It’s very admirable that people in your situation continue to fight for the ability for their children to be bilingual! No te preocupes, tu puedes!

Great post Jeff! As you know, I am trilingual and I think that there really isn’t any better gift that you can give your son than a second language and a deep understanding of all sides of his cultural heritage. My husband and I, we plan to one day raise our kids to be at least bilingual.

Gerry,
Thanks! I agree. Passing on another language to kids is such a great idea. I keep doing more and more research for articles and blog posts and it’s amazing what they are finding out these days with regards to the cognitive and social benefits of growing up with two+ languages.
And Sofia is on my list of places to see, for sure!

I look forward to reading more from you Jeff! And Sofia will be glad to welcome you and your family when the time for that trip comes. Take care.