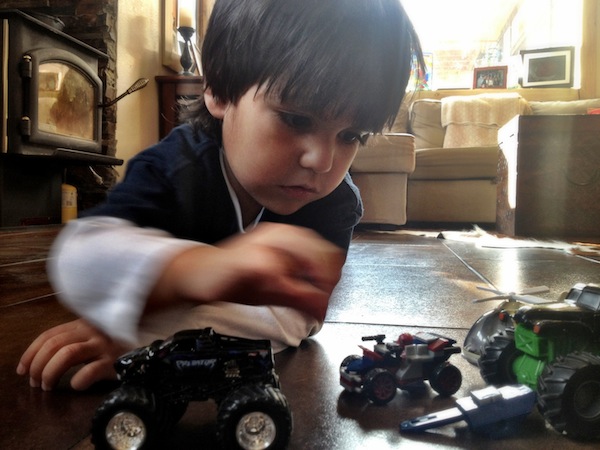 It’s official! My 3-year-old son’s vocabulary in English has multiplied exponentially the last couple of months, and he’s starting to have a preference for his new language. I’ve been observing him closely lately and I am pretty amazed by the fact that whenever he plays by himself, English is his language of choice. Nothing wrong with that, except that it’s all totally new for me because his sister didn’t really do that.

I’m pretty sure it has to do with the fact that Santiago has been exposed to a lot more English much earlier than Vanessa, who didn’t go to school full time until she entered kindergarten. And now I can see how much easier it could be for him to go through the rebellion stage and start refusing to speak Spanish — something his sister has not done… yet.

My boy spends most of his day immersed in English, even now that school’s out because I enrolled him at our local rec center’s summer camp. Every day he surprises me with new phrases and tons of play vocabulary he has obviously learned while having fun with his little friends.

Read more: Watching in Awe As My Son Becomes Bilingual

I am so impressed by my son and his amazing language abilities, and though I should be at least a little bit concerned about the influence all this English will have on his Spanish, I am not. But that’s only because his English immersion experience is about to drastically change.

We’re embarking in a summer adventure I’ve been wanting to make a reality for a couple of years now: immersion travel. We’re going to Puerto Rico in a couple of weeks where we plan to stay for a month with my husband’s family. My children have 10 primos hermanos over there, with at least six of them in their same age group.

I’m super excited that they’ll be attending summer camp with some of their cousins, but mostly that they’ll be spending a ton of time immersed in Spanish and our Latino culture. Both of them are incredibly happy about this adventure and are counting the days until we get on the plane. Vanessa has been to Puerto Rico twice in her short life, but she doesn’t really remember. Santiago has never been, so everything will be completely new to him — especially because most of my husband’s family has never met him.

I’m hoping to make this a summer tradition so that when my kids get a little older, we can send them over there for the whole summer, like we did with my stepson, who is now 22 and fully bilingual thank, in a big way, to the summers he spent immersed in Spanish with his cousins in Puerto Rico.

Immersion Travel: Summer Camp in Puerto Rico
Tips to Make Your Children See Why They Need to Speak Spanish
New Year’s Resolution: We Will Speak More Spanish at Home
7 Comments

What an incredible experience for your kids! They will love it and learn so much! I’m hoping my boys don’t forget their Spanish over the summer. We’re going to have to practice every day (just realized we should be doing that now!).

I know, Yvonne! We’re all SUPER excited! It’ll be so interesting to see my children interact with their cousins and other children solely in Spanish. I can’t wait!

Good luck with your sons and their Spanish this summer! BTW, it was great seeing you in Miami!

Welcome to my world, my son always responds in English even though he understands and can speak Spanish, it could get very frustrating and exhausting but I continue the fight! Have fun in PR!

It’s just so strange for me, Xochitl, because my daughter never did anything like that. Interestingly enough, when the two of them play together, they do it in Spanish! So strange the way bilingualism is different with each sibling…

And yes, we plan to have a ton of fun in Puerto Rico… including lots and lots of days at the beach!!

I fear this might be me one day!! Good luck! keep us posted!

Wow, great site structure! The span of time have you been running a blog regarding? you make blogging and site-building glimpse simple. The entire seem of this web site is impressive, along with the material!

My lifemate and I are both native English speakers but we have had both our sons in weekly Spanish programs since the oldest was 5 and the youngest 3 years old. They now are 9 and 6 (fluent in Spanish – read it, write it, speak it) and have had private tutors for a couple of years now. I, too, have been planning an immersion trip for a couple of years to San Juan now but the price of housing is not making that a reality. I have identified what seems like a nice summer program. Can you provide any help in ways we can stay for a month without breaking the bank?? We would love to rent a condo/apt/house for $1200 for like 3 or 4 weeks. Do you know any interested parties? I can’t seek to find any nice but reasonably priced places on the traditional sites (airbnb, homeway, etc) Any help would be appreciated! Thanks