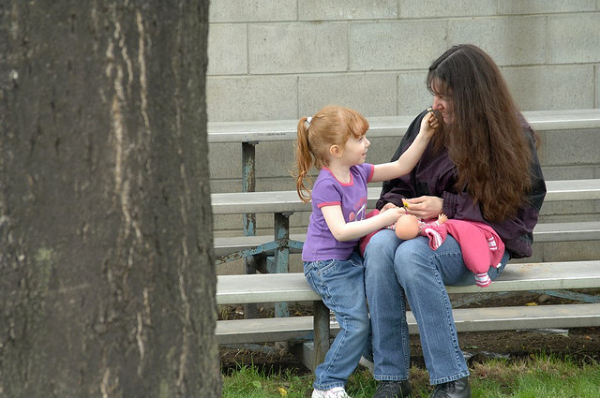 In many ways I feel the same way as Roxana when she wrote, in an earlier post, My Daughter is Bilingual Thanks To Her Teachers, about the important role teachers have played in developing my daughters bilingualism. For the past six months my nena has been hearing English for the majority of her day. I can attest that she is an example of how children acquire language at what seems like a pretty fast pace compared to older children and/or adults, and for my daughter it has all been thanks to her amazing teachers.

That being said, my husband and I continue to speak to her in Spanish 100% of the time, and she continues to do the same when speaking to us. The few times we have heard her speak in English have always surprised us because we really aren’t aware of how much she actually knows.

One of my tactics in raising her with Spanish has been to never translate for her. In other words, if a stranger or friend speaks to her in English I simply prompt her (in Spanish) to respond. As a result, she now translates when I prompt her to respond. For example, recently we went to the pediatrician’s office for her yearly check up and the following conversation emerged:

Sabrina: Hi, that’s my mommy (pointing to me).

There have been other instances, like the one above, that have completely tickled us because she also seems to have acquired a Spanish accent when she speaks English, which we LOVE. My next move is to help her realize that some people are bilingual and that she can use her Spanish with them.

Unfortunately, and as I expected, if the bilingual adults in her life use Spanish and English with her she pegs them as English speakers. This is simply another indication of the power English has in our society. That is to say, my daughter has picked up on the language with the highest status, which was also something I expected to happen. When I reflect on how she has developed her linguistic skills I feel confident that other parents like myself, second generation immigrants, can do the same!

Statistics indicate that the third generation (like my daughter) is more likely to not speak their family’s native language, which in our case is Spanish. Have you, as a second generation immigrant (parents are from another country, but you were born in the U.S.), managed to raise a bilingual child? If so, what are some of the strategies you have used to develop child’s bilingualism?

Becoming Bilingual in an English Dominant Country
What’s Your Name? En Español, ¡Por Favor!
I want my daughter to know about all her different cultural heritages
2 Comments

I am an English speaking mom, but I’m fairly fluent in Spanish. I only speak to my daughters in English, but I made it a point to read books in Spanish to them since they were toddlers. I know the only thing that will solidify their Spanish is going to be when they start to study it in school. If it weren’t for my incredible high school Spanish teacher Paul “Pablo” Robertson, I never would have become fluent in the language. I hope my daughters are fortunate enough to find similar encouragement.

This post describes my exact situation! Until the age of 2 my daughter was at home with only my husband and I, and spoken to in 100% spanish. She is now about to turn 3 and has been for a year going to an all enlglish day care. We have been very strict in out house, and will allways speak to her in spanish, and try to limit her exposure even to english movies or tv shows when at home.
Also we forbid our bilingual relatives to speak to her in english.
In this year her english vocabulary grew exponentially. The first 3 months in day care she was shy and basically didn’t speak a word, because she did not understand a thing. Now she can have conversations in english with her teachers in school and out non-spanish speaking friends. It surprises us when we hear her, beause we are amazed of how much she learned in such a short period of time. I think at this point she knows both languages very well and somewhat to the same degree. But I know that eventually she will become more proefficient in english than in spanish.
Our task now is a difficult one, because it is up to us to continue to nurture her spanish, and find more ways and creative ones to keep it alive in our home, in her heart and keep her interested. But we know how much she will benefit and thank us in the future. So we hope all our hard work will pay off for her.