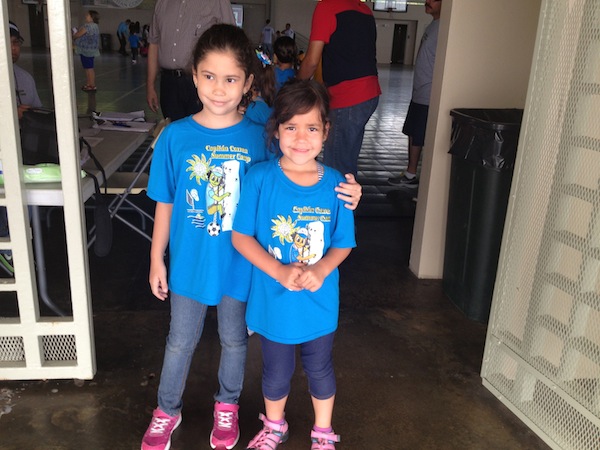 It’s been two weeks since we arrived in Puerto Rico and the experience has already been much more than I expected.

My kids have been so immersed in Spanish at every level and in so many settings that a couple of days ago Vanessa actually came up to me and out of nowhere asked: “Mami, ¿qué tal si me olvido mi inglés?” I wanted to laugh at her ingenuity, but I just reassured her that this wouldn’t happen. Truth is she wasn’t so much worried as she was curious. I guess she’s finally old enough to grasp the huge difference between living in a country where English is dominant and in one where Spanish rules. And I couldn’t be happier.

The best part of our trip, so far, has been the chance Vanessa got to attend the same summer camp her cousin has been enrolled in since the beginning of the month. Although Vanessa only got to go for two weeks, these were jam-packed with all kinds of fun activities and even two field trips.

From 8:00 a.m. until 3 p.m., Vanessa was immersed in the kind of Spanish setting that is very hard for me to offer back home: the one of play, of children and of fun. While she may have gotten this here and there — especially when she was younger — thanks to our bilingual playgroup, the reality is that she’s never experienced something like these past two weeks of summer camp in Puerto Rico.

Every day at pick up time, Vanessa had nothing but great things to say about her experience. Of course, it didn’t hurt that her cousin, who’s only two months older than her and with whom she clicked immediately (despite it being three years since the last time they saw each other) was with her to help her navigate her new environment. 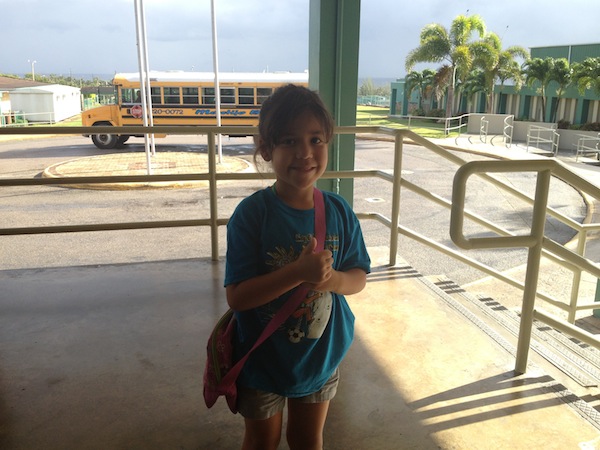 Although she joined the summer camp halfway through, Vanessa was really lucky in that they saved the best two field trips for the end. On her first day of camp, she got to go to the Arecibo Observatory — the world’s largest and most sensitive radiotelescope, which happens to be located in my husband’s hometown. As a science-lover who’s particularly interested in planets, stars and space in general, Vanessa came back fascinated with all that she had learned… in Spanish!

The second field trip took her to the Arecibo Lighthouse and Historical Park — the last lighthouse built by the Spanish government in Puerto Rico before it became a colony of the United States after winning the Spanish-American war. Vanessa was taught a lot of historical information about the beautiful faro and had a blast in the water park. 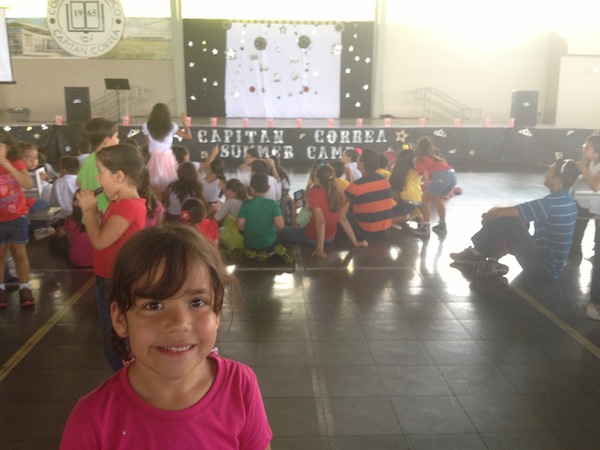 On the last day of the summer camp, there was a special ceremony and Vanessa got to perform a song from the movie “Wrecked Ralph” with the other kids in her age group. As I took her home, she told me she never imagined it would be so much fun and thanked me for bringing her to Puerto Rico and enrolling her in the summer camp!

5 Tips to Exercise Your Bilingual Brain

Wordless Wednesday: ¡Ostiones en Boquerón, Puerto Rico!
My Son Prefers English Even Though Spanish is All We Speak at Home
Our Experience at a Spanish Immersion Winter Camp
20 Comments

This is wonderful Roxana, Vanessa will always remember this experience! How many days did it take her to speak completely in Spanish? (without mixing words)
Xochitl

Yeah! The plan is to bring her every summer so she can go to the same camp with her cousin. Vanessa’s first language is Spanish, so she doesn’t really have an issue with mixing words. She occasionally forgets a word in Spanish and uses English and vice versa, but I think both her languages are pretty solidified. In fact, I’ve been asking her to keep a journal about her experiences in Puerto Rico. I told her she could write in either language and she chose Spanish… I must say she has blown me (and her family here) away with her abilities! I’m one proud mom, can you tell?

Oh, I know how you felt, I had similar experience with my little one and wish I could do it every summer.
It is great for them to learn and great memories. It encourages them to excel in another language which is theirs as well. Wonderful, glad you all have a wonderful time.

Hello,
This camp looks great. How did you find it? What is it called? Do they have a website?

Hi Melissa! I found it because my niece goes there during the school year. The school is called Colegio Evangélico Capitán Correa and the summer camp is only in June. There’s no website for the camp, but here’s the school’s website: http://www.capitancorrea.org

Roxana, my son and I are going to be in Puerto Rico this summer. He is in a Spanish immersion program right now. I want him to continue his education in Puerto Rico. Can you help me find a summer camp or put me in contact with your cousin?

I think these camps are a great idea. In general children soon lose their inhibitions and join so start to pick up new words quickly.

This sounds so fun and educational! I love the idea of her keeping a journal!

I was wondering where you got the immunization record PVAC 3 and the medical certificate in Puerto Rico for camp admission? Thanks again.

I think this is such an amazing idea. My husband is getting transferred to PR for one year and we want our children to really immerse in both language and culture. We’ll be living in Agaudilla, have you seen or heard of any immersion summer camps for kids in that area? I’d actually like them to attend a local school as apposed to the DOD school.

If only all people could become more aware of the very
real dangers posed by carbon monoxide poisoning.

Each year more than twenty people are killed by carbon monoxide leaking from faulty central heating systems together with hundreds more who suffer serious health problems because of it.

Hi. Can you send me the name of the summer camp please? Thanks!

Thanks for the marvelous posting! I definitely enjoyed reading it, you happen to be a great author.
I will be sure to bookmark your blog and will eventually come back in the future.
I want to encourage continue your great work, have
a nice day!

Hola! Love your blog! Our children attend a dual language school in Florida. This summer we are spending the month of June in PR to send our children to full Spanish immersion camp. I contacted Captin Correa and am eagerly awaiting their response. We are looking forward to the trip. It’s about 3-6 moms and our kids! Do you have an estimate for the price of the camp?
Any help you can provide will be greatly appreciated. Laura:)

Kids talents need nurturing, and you can so by letting them join sports camps.

How absolutely wonderful! I’ve been in the process of looking for an immersion and/or service learning camp or institute for my daughters. I’ve gone as far as emailing a bilingual school in my hometown of Guayama and offering my services as an ESL/Science teacher free of charge in exchange for such a program. No one has ever responded. If you have any further ideas or contacts please feel free to share. My daughters are 6 and 12 years old. Again I applaud you on encouraging your children to live bi-culturally.