Keeping My Growing Sons Interested in Reading in Spanish 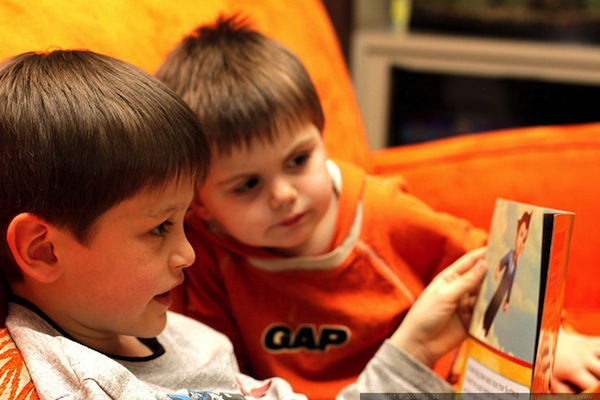 In my father’s grand tradition of celebrating Thanksgiving in April — or whenever else he felt like it — he and I didn’t celebrate my birthday in May. We did celebrate it with cake or maybe a family gathering. But I always got my big gift, the one I looked forward to all year, in July.

Back in the eighties there was only one place to find books in English in Costa Rica — where I grew up. It was called simply The Bookshop, and it was small, unassuming, and staffed by friendly English speakers. And every year, in July, they had a huge sale. My father would take my brother and me there for our “birthdays” and we would emerge, after what seemed like hours, with piles of books. Money was never an object, and I understand now how important it was to my father for us to have access to books in our minority language. It was the place that introduced me to Enid Blyton, Madeleine L’Engle, James Herriott, and countless other authors I remember fondly from my childhood.

I realize now that I had total control over what my boys read when they were smaller — and I always, always read to them in Spanish. Books I found in Costa Rica, Eric Carle and Dr. Seuss translated into Spanish, and my favorite, lots and lots of children’s poetry, some of which I remember my own mother reading to me when I was little. For quite a while, in fact, they were literally a captive audience — their cribs were crammed in a room so tiny that I could sit between them and read to them that way.

Once they were able to read on their own, though, that all changed. They simply did not want me to read to them out loud anymore, period. They were giddy with their ability to pick out books and read them themselves, without my help. For the most part, I’ve been letting them, and I spend their reading time with them while reading myself.

The books they choose, however, are almost invariably in English. While they read, they chitchat about what they’re reading and we talk about the books in Spanish. But I’ve recently realized two things when it comes to reading around here. One, even though we have shelves full of books, my boys can be pretty predictable and they read the same ones over and over. Two, they’re outgrowing their collection of books in Spanish and I haven’t done anything about it.

So this spring, I’m taking action. I’m going to try to be merciless and get rid of the picture books they no longer want to read. I’ll also be more selective when it comes to book shopping — I won’t buy books just because they happen to be in Spanish, as I’ve done in the past. And, most importantly, my boys need to be involved, and it needs to be fun and exciting for them, as it was for me.

We’ve started to do some online shopping together, and although it’s not quite as fun as browsing in the bookstore, it’s working out really well. I can also target their narrow interests. For Primo, it’s snakes, sharks and math; for Secondo, it’s airplanes and trains. After a quick Google search the other day, Primo and I found a beautiful hardcover book, Serpientes y Reptiles. We ordered it together, and counted down the days until it would arrive together. Secondo and I just tracked down a book called Aviones Comerciales, which he is beyond excited about.

My sleepy toddler who listened raptly to the poems of Gabriela Mistral and Carmen Lyra has been replaced by a gangly first grader, who shoves his book in my face so that I can fully appreciate just how scary the picture of the black mamba is. But he’s reading, and he’s reading in Spanish, so I’ll take it.

Are Two Languages Better Than One? {Infographic}

A Reassurance of Love

The Surprising Effect of Autism on My Kids Bilingualism
A Mother by Any Other Name
31 Days of Reading in Spanish: Froggy y su papá
9 Comments

We pretty much do the same with our Sofia even if she’s only two. Even if Spanish is not my main language (I’m Filipino) I know how to speak and read it well. Since my husband is Colombian he always tries his best to read and talk to our little girl in Spanish most of the time.

What’s up, after reading this amazing article i am as well cheerful to share my familiarity here with colleagues.

When I look at your website in Ie, it looks fine
but when opening in Internet Explorer, it has some overlapping.
I just wanted to give you a quick heads up! Other then that, fantastic blog!

Wow, incredible weglog format! How long have you eever been blogging
for? you make running a blog glance easy. The total look of your website is fantastic, let alone the content!

Right away I am going to do my breakfast,
after having my breakfast coming over again to read additional news.

With havin so much content and articles do you ever
run into any problems of plagorism or copyright violation? My blog has
a lot of unique content I’ve either created myself or outsourced but it looks like a lot
of it is popping it up all over the web without my agreement.
Do you know any ways to help protect against content from being ripped
off? I’d genuinely appreciate it.

I am regular reader, how are you everybody? This paragraph posted at this web page
is in fact fastidious.

s Haiti Relief Bounty Tournament will match all bounty money won and donate
the total relief efforts to Haiti up to $50,000 and also contribute all tournament fees
collected. What do you believe have been the obstacles to reaching
your healthy goals. Look inside the records for more information before placing your soccer bets.