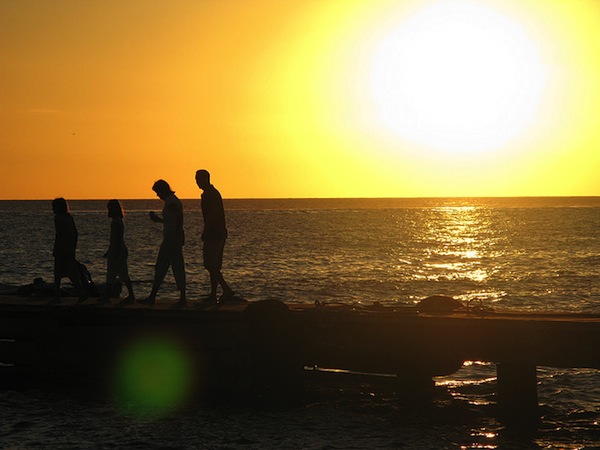 My very active 83-year-old aunt called me a few minutes ago to ask me to accompany her to one of her multiple events. She is from Ecuador and has been living in San Francisco for about 65 years, since she came to the U.S. for college. She got married with an Italian-American guy and had four children. Her children live around the Bay Area and except for one of them, who learned Spanish in college; they speak only a few words in Spanish.

My aunt is from a time when people wanted to melt in and so, even though she and her kids traveled on vacations back to Ecuador, she did not speak Spanish at home and they did not attend immersion or bilingual schools in San Francisco. I grew up in Ecuador and attended a bilingual Spanish-English school there.

After going to college in Brazil, I came to San Francisco for what was going to be a short stay, and 22 years later, I still find myself here with two kids, a house and an American husband. When I first arrived to San Francisco, I lived with my aunt for three months and got a chance to reacquaint myself with her. I remember thinking how much the first 18 years of a person’s life really mark the essence of who they are. Though she has lived in San Francisco for so long and has many American trait — like the fact that she is always on-time as opposed to the Ecuadorian tardiness — her personality and essence are still very Ecuadorian. Aside from the fact that my aunt wants company to the event, I think that she likes to speak in Spanish with me, and likes to tell me about her life and friends from Ecuador, with whom she is still in touch.

Though I have always considered myself a very nationalist Ecuadorian, when I first arrived to the U.S., I wanted to experience everything from the American perspective. I went to live with American roommates, worked for Oracle and interacted with people from around the world, etc… and then married an American from Anglo ancestry.

As the years went by, I began to miss my roots and tried to become acquainted with more Spanish speaking friends. When I got pregnant with my daughter Isabela, who is now 10 years old, I was certain I was going to speak with her in Spanish. I wanted to give her the benefit of being bilingual and hoped that would lead to biculturalism.

After she was born, I stopped working to take care of her. Speaking to her in my own language was so natural to me that I could have not done it otherwise. As I discovered her personality and loved not only the beautiful baby she was, but the personality of the vivacious, caring and creative person she is, I wanted for her to experience and understand my roots and who I was as well.

The second year of her life I went to live for almost the whole year in Ecuador (my husband came to visit every couple of months). Spanish became her first language and the surroundings that I grew up with hers. We returned to live in San Francisco, and I have tried to keep Spanish as the language between me and the kids as much as possible. Even at the park when we’ve met with non-Spanish speaking friends, I have continued only speaking Spanish to my kids (even if I looked crazy).

Because they were fluent Spanish speakers at the time they started school (my daughter and now my son), we decided to put them in a public Mandarin immersion school. To maintain the kids Spanish and their understanding and relationship to the culture, we go to Ecuador for two months every year. My kids love going to Quito, the city I grew up in, and to the same beach area I used to go to when I was a child.

I can only hope that when I get old, my daughter will want to accompany me to some event I may have, but I am sure I that when I call her I will be able to speak with her in Spanish.

My Struggle to Raise my Kids Bilingual
What Is A Spanish Speaker Supposed To Look Like?
Getting my Husband to Speak More Spanish to Our Kids
No Comments