Why I’m Not Voting Today 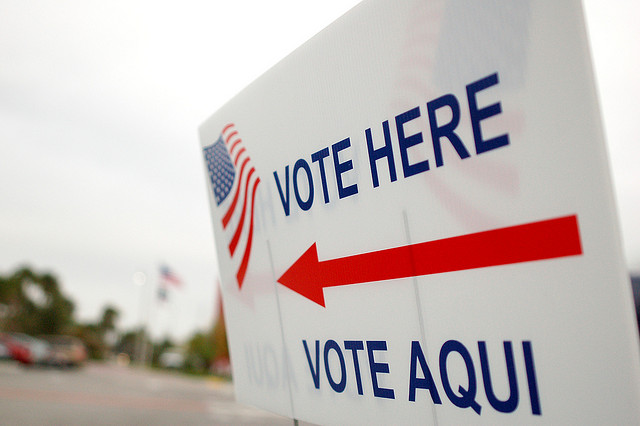 As millions of Americans go out and vote for the next president of the United States today, and the excitement associated with the empowerment brought about by casting a ballot is palpable in the air, I’m left wondering, once again, if the time has come to change my attitude regarding my immigration status. So I figured this would be a great opportunity to share an excerpt from our book Bilingual is Better. This is from chapter 5, ”Between Two Worlds: Identity vs. Assimilation”.

My husband was born in Puerto Rico—a colony of the United States—and both our children were born in Colorado. So they’re all American by birth. My older sister was born here when my father was a student in Florida. Although they went back to Peru when she was not even one, when we came back to the States many years later, my parents obtained their legal permanent residency through her. Once they were residents, they petitioned for my little brother and I. After spending the five years as legal permanent residents required by law, they all became naturalized citizens. I, on the other hand, opted against it.

The reasons behind that decision have been the source of many an argument between my husband and I and — when he was alive —between my father and I. It’s not really a subject I like to discuss — especially during these contentious political times full of anti-immigrant backlash, but I figured that sharing my personal struggle with this subject could resonate with other people out there who feel the same way.

It’s not that I have anything at all against my adopted country. My children wouldn’t have been born here if that were the case. It’s just something that is really hard to ex-plain, but I will try — even though I’ll probably get lynched in the process. I like the United States, but I love Peru. I’ll stand up as a sign of respect when someone recites the pledge of allegiance or sings the national anthem, but I won’t follow their lead. The only anthem I know by heart and can sing at a moment’s notice is the Peruvian one. I think the Stars and Stripes is beautiful, but I only get butterflies in my stomach when I see the red, white and red flag of my birth country. I could go on and on, but I think this will have to suffice.

Even so, three things have made me analyze my decision not to become a U.S. citizen a bit deeper lately.

The first one has to do with the fact that at thirty-nine years old, I have never voted, which is very weird because I’ve always been interested in politics and I am, after all, a journalist. Yet, I’ve never partaken in what I consider one of the most vital parts of belonging to a democracy. I’ve never voted not because I didn’t want to, but because I can’t — although my husband would beg to differ. Let’s see, if we were to get technical, I could actually vote — in Peruvian elections, that is. Yet even though I’ve covered Peru’s elections a couple of times as a journalist, the reality is that I have absolutely no connection to my home country’s politics.

My husband, however, disagrees about me not being able to vote because I could’ve become an American citizen fourteen years ago —meaning I’ve missed almost four presidential elections and twice as many at the state and city level.

I must admit I was jealous of my husband when he voted for Obama in 2008. There was so much presidential buzz going on back then. It was an exciting time for sure! Plus, he actually got to meet Obama during a one-on-one interview he taped for Univision and we both got to cover the Democratic National Convention in Denver.

A few days prior to a recent (local) election, my husband told me he was never going to vote again. “It’s all the same,” he lamented. “They’re all the same.” He, like many others who voted for Obama, was disillusioned. He felt too many promises were broken. “It’s hard fixing something that’s so broken,” I told him. But he didn’t care. Then he covered an event in which a local Latina activist talked about the power of just one vote and he came back a changed man.

“I don’t know what I was thinking,” he confessed. “If we all think the way I was thinking, then nothing will ever change.” After he voted, he came home feeling pretty empowered. I hate not knowing what that feels like.

On Becoming a US Citizen & Voting for the First Time
Have Passport, Will Travel
Mi Gente Finally Speaks Up….We Speak Up
12 Comments

Then go back to Peru!

Carolina- Completely uncalled for. Por favor, a tad of respect in your criticism even when you disagree. To each their own.

You are the one who made the commentary that your heart is not in this country. You are the one expecting some backlash….if you can’t handle that then like I said go back to Peru! If you are living in America then embrace it! And if you can’t take the heat then get out of the kitchen!

No lynching from me, you’re supposed to be proud of your heritage, and I’m glad that you are! I enjoyed reading your article, it passed by me on my Twitter feed and I had to come take a look.

Thanks for stopping by! What I posted above is but an excerpt of an entire chapter that explains this whole issue in much more detail…

Thanks for sharing what could be a very unpopular viewpoint! I definitely appreciate your honesty – with yourself and even with the United States. I know of a lot of people become US citizens because the opportunity is there and lets face it – a lot of things in life are easier with a US passport. I actually did become a US citizen as a child and have always been very proud of it and treated my rights with a lot of respect. (still cant become president though and that makes me mad!!)

After having spent about 3 years in Colombia, I got very involved in their recent presidential election (along with my husband). We were so excited, went to rallies, and basically had a lot of Obama-esque hope. I was so dissappointed when our candidate didnt win – I even went with my husband to vote (just for the experience.) I don´t think I will ever become a Colombian citizen, but boy did I want to vote in that election. (I actually can vote in mayoral elections as a resident.)

Ali, writing that part of the book wasn’t easy, for sure. But it’s the truth and I wanted to make sure I was as honest as possible regarding this issue. In an effort not to make the excerpt super long, I omitted some paragraphs (that’s why I put the asterisk), which get into a lot more detail as to the reasons behind my decision. Those who are interested, can find the whole section in our book.

Thanks for sharing your story and how amazing that residents are able to vote in mayoral elections in Colombia!

No lynching, just curiosity. How does it work not being a citizen, but living here? Are you able to get permanent residence without citizenship? Do you have to keep paperwork updated and all that?

I understand not wanting to give up your citizenship in Peru. I had the same feeling about my home state (not country) of California when I moved to Texas. I kept my California licence for years. I voted by absentee ballot for years. I finally gave in and became an “official Texas citizen” because because of all the things that were a hastle, but I drug my feet as long as I could. I can imagine that’s an even harder step when you’re not just crossing state lines, but crossing borders.

I have roots now and Texas is my home, but still not the way California is. The place you’re born always stays with you.

I feel like I understand you. My husband went back and forth about the same issue for a long time and I think the only reason why he is now on his way to becoming a US citizen is because his country of origin doesn’t recognize loss of citizenship. A lot of people don’t realize that to be a US citizen you have to renounce your home country citizenship, which is something very difficult and very emotional for many people. I don’t know what the citizenship law is in Peru, but I can say that even if I moved to another country and made my life there I would have a hard time becoming a citizen there if it meant renouncing my US citizenship. There is no reason that one can’t be a full member of their adopted community, while still loving their home country.
All of us here have bicultural children who are going to have to deal with the same tug between two countries and we certainly aren’t going to tell them they are any less one than the other. We love them for who they are and what they do as people, not based on where from or how many different passports they have. Somos todos Americanos, con sangre Americano, porque nuestro continente es uno de inmigrantes y un pueblo muy bien mezclado.

I totally get what you are saying. I am a fellow Peruvian and have been in this country for 11 years. I had some of the same struggles you had about becoming a U.S. citizen. I am married to an American citizen so I only had to wait 3 years but didn’t start the process until after 5 years of marriage. One of the things that made the decision easier for me was the fact that Peru allows for dual citizenship. I think I wouldn’t have done it had this not been the case. My becoming an American Citizen did not mean that I had to give up my Peruvian Citizenship. I am and will always be a Peruvian citizen in paper and in my heart – even if I never become a Peruvian resident again.

It was particularly exciting for me as I was expecting my first child when I attended my Naturalization ceremony.

It is a very personal decision and no one should be judged for doing or not doing what doesn’t feel comfortable.

Luckily, I am able to have dual citizenship and got my citizenship as soon as I could in order to vote and make my voice heard, I feel that since I pay taxes I should be able to vote, is a great feeling…