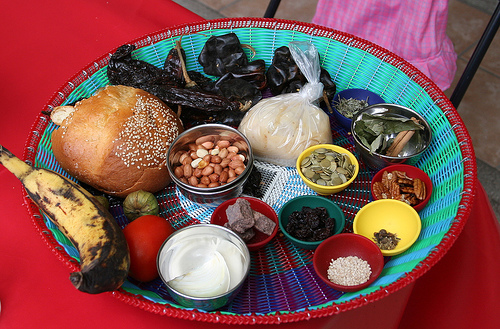 Last time I visited the National Museum of American History in Washington D.C., I noticed that a section was closed as they were making changes but I didn’t know why – Now I discover it’s due to an addition that I cannot wait to go check out with my family!

“FOOD: Transforming the American Table, 1950-2000″ opened yesterday, November 20th, 2012. The 3,800-square-foot exhibit includes seventy years of Latino food history and explores the social and cultural changes of eating in the United States. The types of changes that visitors can expect to learn about include everything from the influence of immigrants on the food landscape to how new technologies changed the types of products available on grocery store shelves today.

One section of the exhibit which I’m particularly keen on seeing is called “Resetting the Table” and it focuses on global economic and social shifts which have contributed to many changes in the products that are now widely available across the nation but were once found only in the bodegas of ethnic neighborhoods.

Can I just say that my life will be complete if I find the word “pupusa” anywhere in this exhibit? I’ll have to report back with photos once we’ve had a chance to check it out!

In the meantime, some of the Latin American highlights of the exhibit include, (from the press release):

Born in 1874 in Guanajuato, Mexico, Concepcion “Concha” Sanchez immigrated to the U.S. and, in about 1912, her family opened a grocery store, The Mexican Mercantile, in Fillmore, Calif. Sanchez ground corn using an electric molino (corn mill) to make masa (dough) for tortillas and tamales. She placed balls of masa onto the conveyor belt, hand-cranked them through the rollers of a tortilladora (press), then dropped them onto a propane-fired comal to cook. The exhibition includes Sanchez’s molino and tortilladora as well as her blue gingham apron or delantal. The “La Rotativa” press dates from about 1923 but was bought and used by the Sanchez family in the 1940s.

Adelaida and Macario Cuellar emigrated from Mexico to Texas in 1892 where Adelaida sold homemade tamales to help support the family. By 1940, two of her sons had opened a cafe in Dallas using their mother’s recipes. The restaurant became known as “El Chico,” which expanded into a chain of restaurants, offered franchise opportunities and even marketed its own packaged foods and cookbooks. Continuing with the original Tex-Mex staples such as nachos, enchiladas and tacos, they added regional specialties from New Mexico (sopapillas), California (burritos and fish tacos) and Arizona (chimichangas) and reached back into Mexico for classic updates on foods, such as mole of Oaxaca. The exhibition’s “The Mexican Food Revolution” section includes a number of El Chico menus and food packaging, the El Chico Cookbook and a red, green and white embroidered and sequined China poblana-style dress made in Mexico City about 1960, worn by Miss El Chico for promotional and special events at the restaurants.

Art Velasquez and other Mexican American businessmen began Azteca Corn Products Corp. in the Pilsen neighborhood of Chicago in 1969 to bring traditional Mexican foods to consumers outside of their neighborhood. It is one of the early companies that began using food science to preserve corn and flour tortillas so they could be shipped to groceries and have an extended shelf life. The Pillsbury Co. bought the company in 1984; five years later, Velasquez and his wife Joanne bought back the assets and changed the name to Azteca Foods Inc. “The Mexican Food Revolution” section includes Azteca flour tortilla packaging from 1970 and a tortilla shell mold from 1987. The Azteca story illustrates how the tortilla moves from an “ethnic” food to a more popular everyday staple.

First mixed in bars along the California-Mexico border in the 1940s, the margarita—tequila, lime juice and orange liqueur—became a standard beverage in Mexican American restaurants. Frozen margaritas, blended with ice, became popular in the 1950s and 20 years later the margarita had surpassed the martini as the most popular American cocktail. In 1971, Dallas restaurant owner Mariano Martinez noticed that ordinary blenders did not deliver a consistent mix for frozen margaritas. Inspired by the 7-Eleven Slurpee machine, used since 1965 to make semi-frozen beverages, Martinez and a friend, chemist John Hogan, tinkered with Martinez’s dad’s recipe and adapted a soft-serve ice-cream machine to make margarita “slush.” The novelty was a huge hit at Mariano’s Mexican Cuisine restaurant.

The Emergency Farm Labor Program, known as the Bracero Program (1942-1964), recruited two million Mexican nationals to work in the U.S. on short-term labor contracts. The exhibition uses lettuce (iceberg) as a case study to examine how produce was brought from the field to the table in the 1950s and ’60s. The lettuce hump, or small square wheelbarrow, in the “Abundant Harvest” section was used in California between 1960 and 1964. The section includes a hat, worn by Bracero Savas Zahvala Castro in the California fields from about 1957, as well as a short-handled hoe (1950s-60s) known as el cortito. It required workers to stoop during long hours in the fields and became a symbol of exploitive working conditions. Campaigns by the United Farm Workers helped inform Americans about agricultural labor practices and helped change attitudes about food production. A U.F.W. boycott lettuce poster from the 1970s and other materials are on exhibit in the “Good Food” section.

The Robledo Family and Winemaking

Reynaldo Robledo Sr., now a landholder and winemaker in Napa Valley, Calif., began his career in the industry through the Bracero program, migrating to Napa from Michoacan in the 1960s. Today, the Robledo Winery, which began in the 1990s, is one of only a handful of Mexican/Latino-owned wineries in the state. The exhibition features a stool from the winery’s tasting room that is evocative of a Mexican hacienda as well as a budding box and other tools used by family members.

Other Related Objects and Collections

The museum’s collections include Mexican-inspired molds and tools, such as the “Mexican Kitchen,” made by the Nordic Ware company, which shows how diverse manufacturers made products to help the home cook better replicate ethnic foods. While not on view in this particular exhibition, the museum’s Archives Center is home to the The Goya Foods Collection, which documents the history of the company founded by Prudencio and Carolina Unanue, who believed that there was an expanding immigrant market for the ingredients of Spanish cuisine. The collection dates primarily from the 1960s to 2000, though some materials are included from its earliest days in New York in 1936.

See all this and more in person at the Smithsonian’s National Museum of American History in Washington D.C. or visit the website.

What Being Latina Means to Me
Martha Stewart Takes Her Show to Mexico City
Posadas in Mexico: The Largest Nativity Scene in the World
1 Comment

There is no such thing at the moment but there are goods that promise to stop additional hair loss and maybe restore some of
the lost hair, if the follicles haven’t completely withered away.
All you have to do is brush your hair with this product for about fifteen minutes at a time.
If your hair is long and strong, you can go for any kind of style that suits your face or personality the best.