The Family Experience of a Lifetime Aboard Royal Caribbean 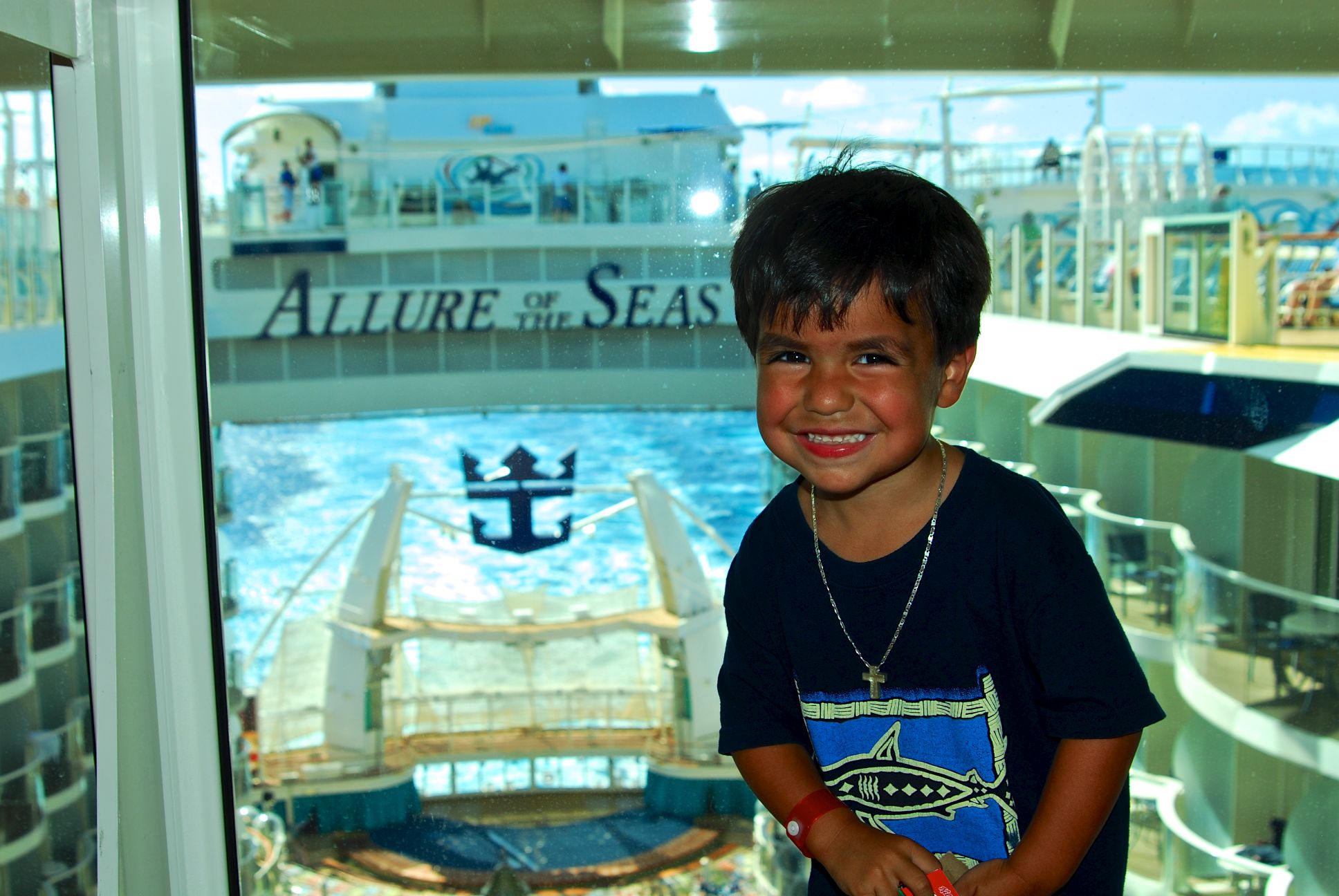 My family and I just got back from a 7-day Royal Caribbean cruise that took us to Labadee, Haiti and Cozumel, Mexico. (The ship was supposed to dock in Falmouth, Jamaica also, but Hurricane Sandy had other plans.) As you can see from the photo above, we went aboard the Allure of the Seas — the biggest cruise ship in the world! While I’ll attempt to give you a sense of what it was like through a series of photos, I think the only thing that will do justice to our whole trip is for you to experience it yourself. 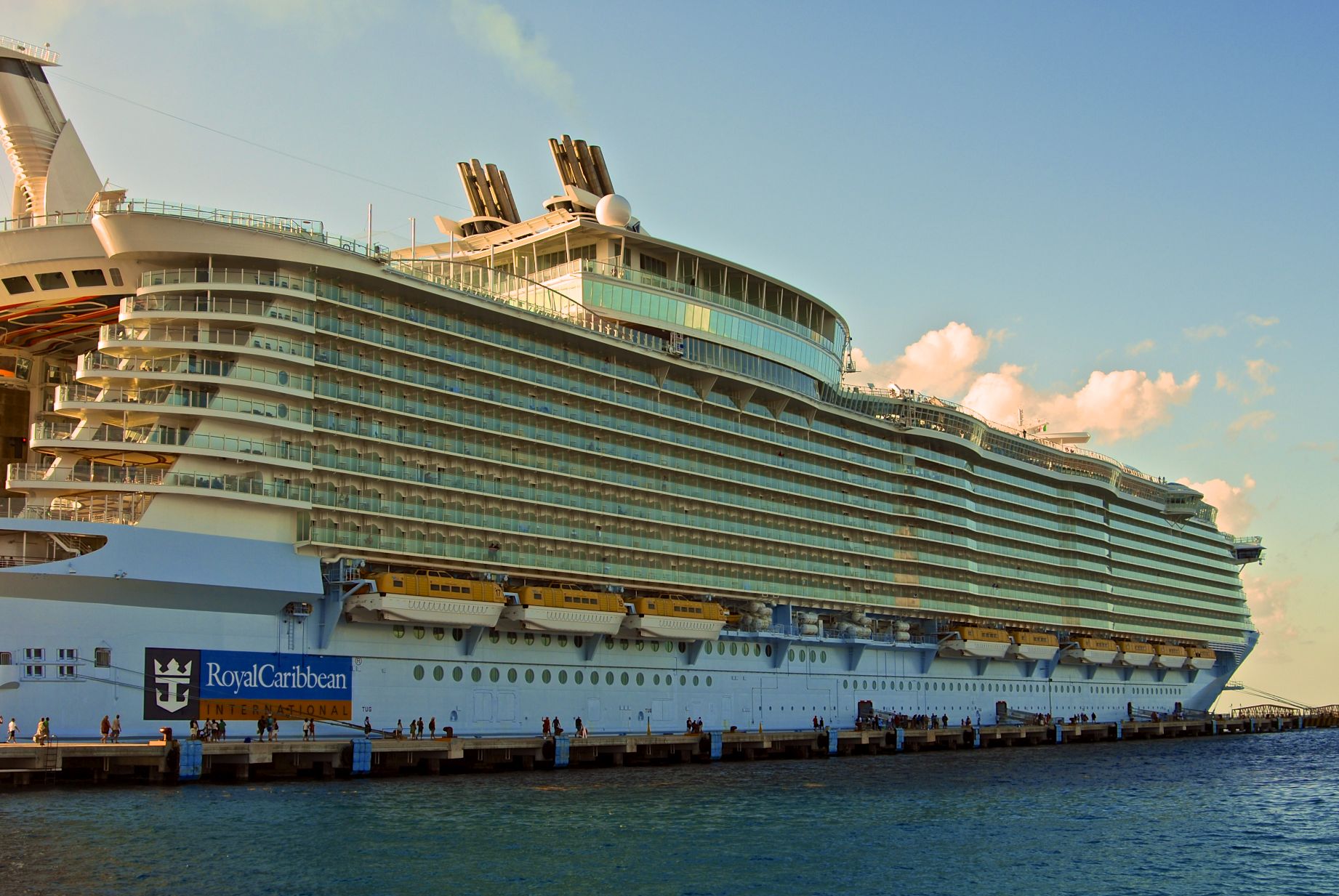 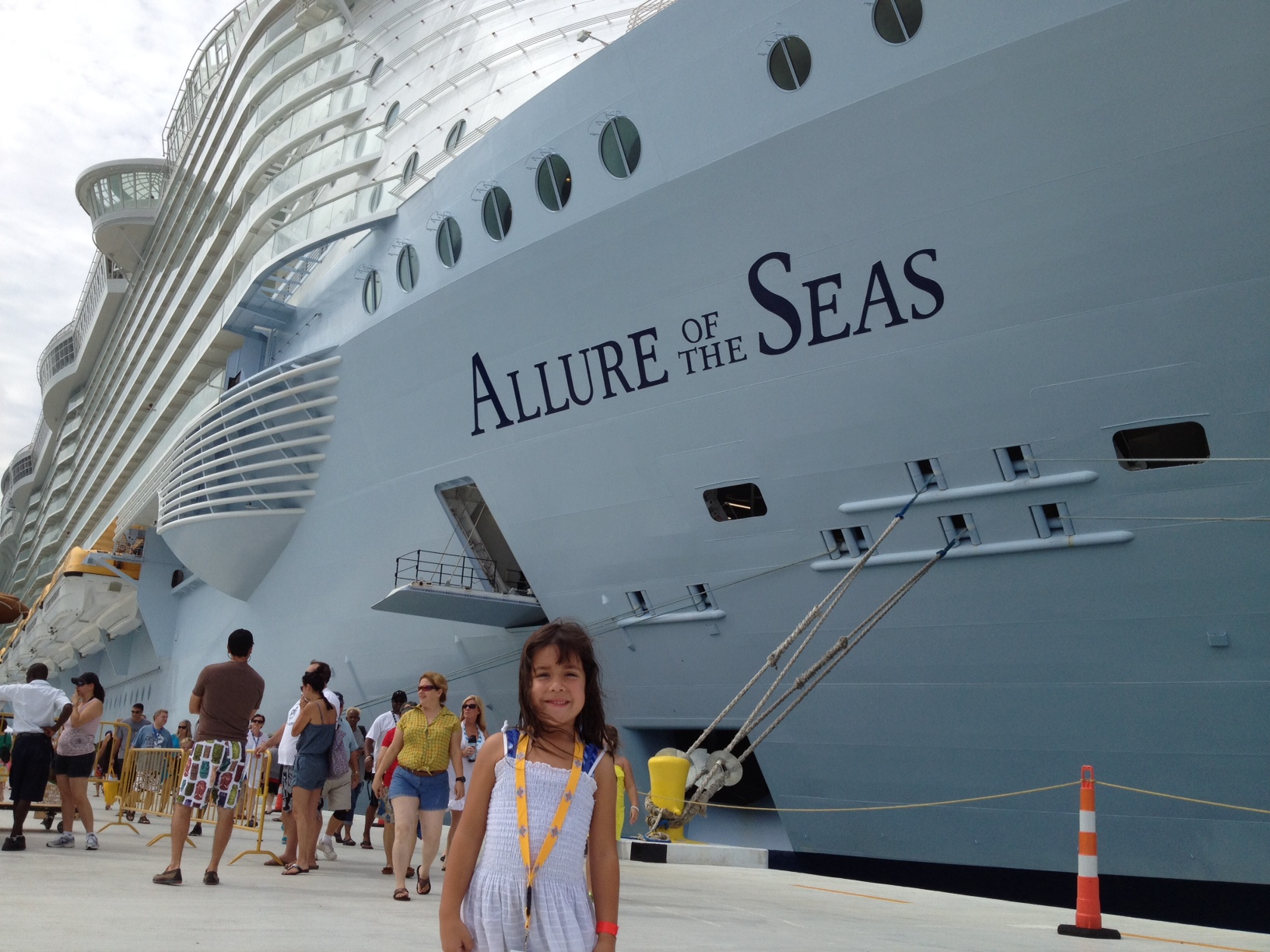 But before I begin, I want to disclose that this trip was made possible by Fisher-Price and Royal Caribbean. What does one have to do with the other, you might ask? Well, Royal Caribbean has partnered up with Fisher-Price to offer all kinds of incredibly fun onboard experiences to little cruisers. From playgroups with interactive sessions for the teeny ones (ages 6 months to 36 months) to a toy lending program and even a musical birthday party show with the Little People characters, there is something for everyone! 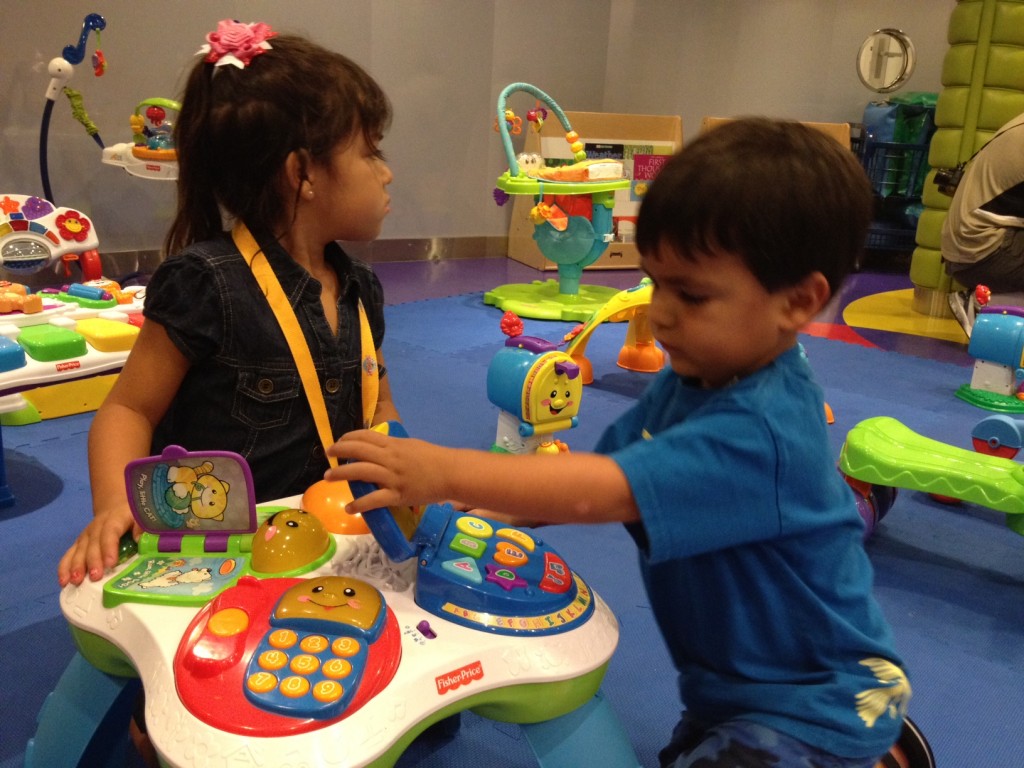 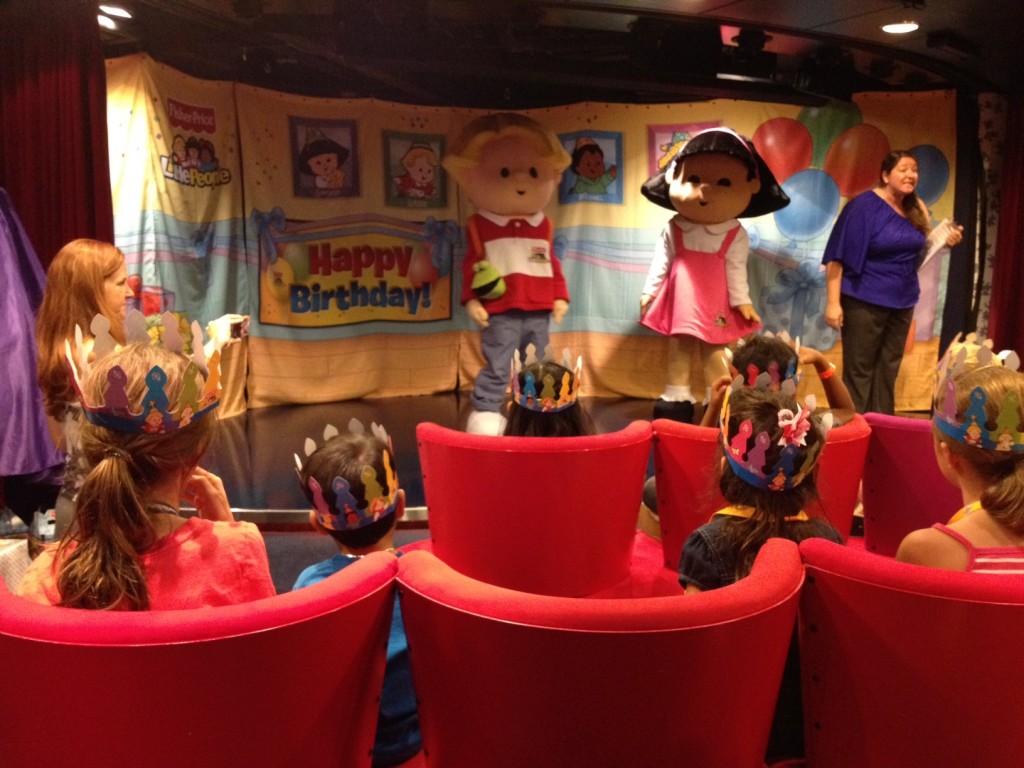 One of my children’s favorite things was Royal Caribbean’s Adventure Ocean youth programs. Although Vanessa was sad to be separated from Santiago because of their age difference, she got over it quickly after she had the chance to experience all the amazing and fun activities she participated in each time she was there. Santiago was in a program called Aquanauts (for ages 3-5 years) and Vanessa was in the one called Explorers (for ages 6-8 years). From science to art to music, there was never a dull moment while my children where a part of the cruise’s youth programs. I must say I loved going to get Vanessa at the end of each session only to find her having the time of her life dancing! 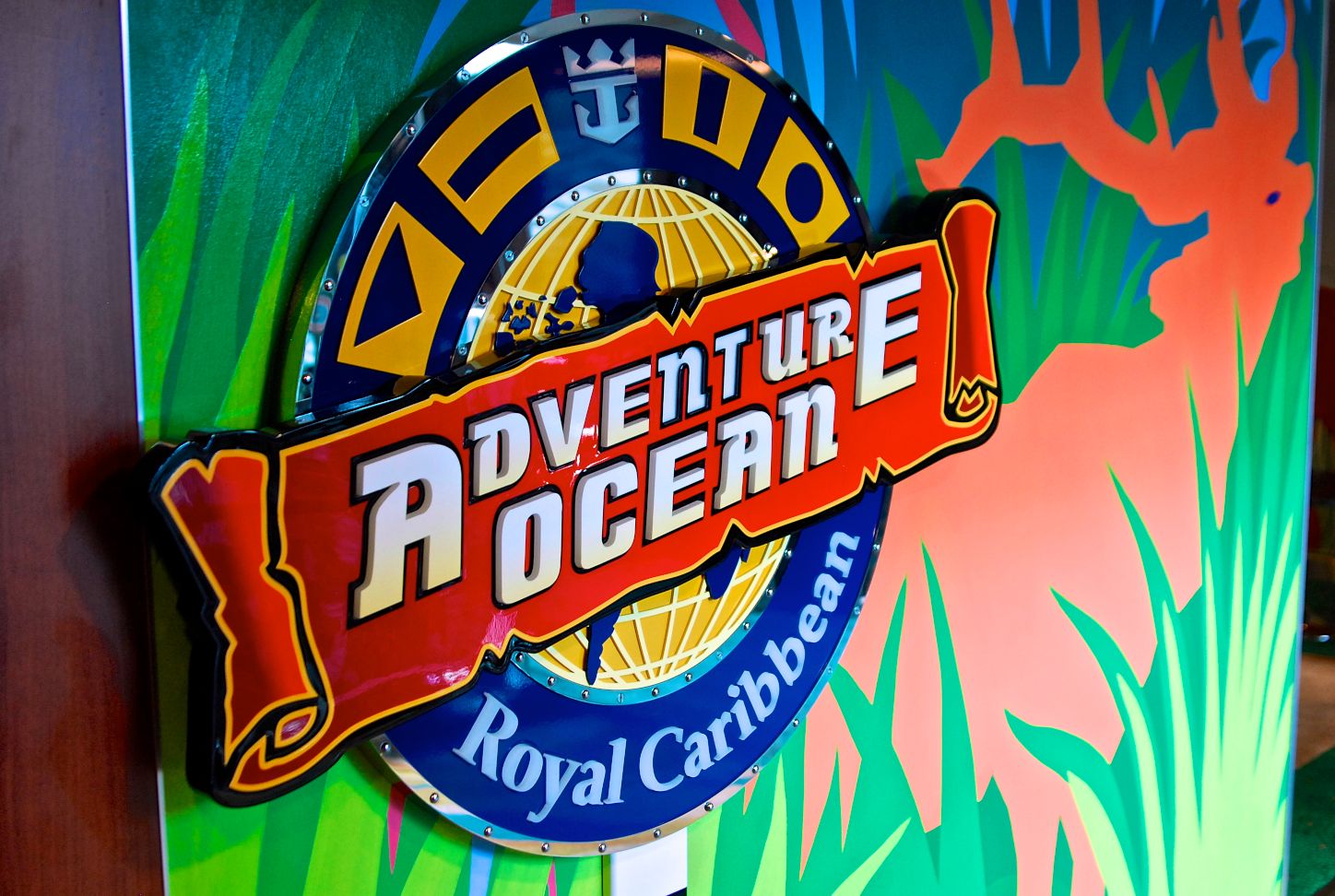 But the aspect I liked the most and which made me feel the most comfortable leaving my kids there — especially when it came to Santiago — was that so many of their staff members were multilingual. As many of you know, Santiago is not yet fully bilingual and Spanish is his first language. As soon as I signed him up for the Aquanauts program, I asked if someone in the staff spoke Spanish and I was so very happy to find out that several of them did! Santiago was quick to make friends with all of them — the Spanish and the non-Spanish speakers alike — but I was glad that he had people there who would be able to understand him without a problem. 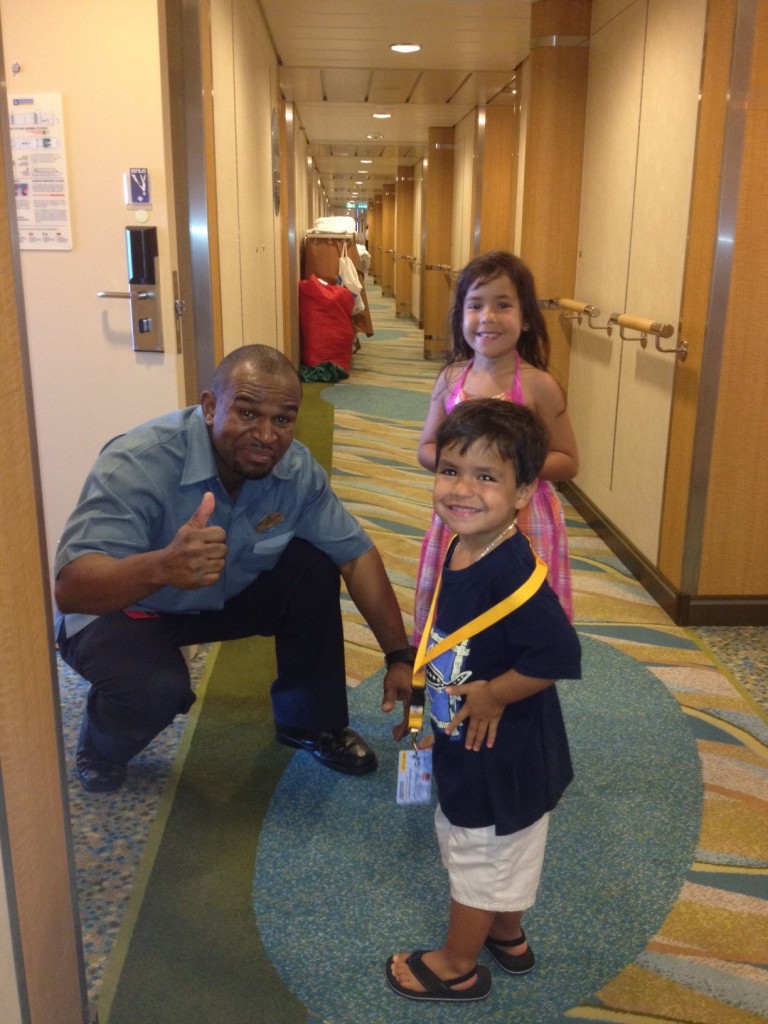 Speaking of which, one of MY favorite parts of the cruise was the amazing diversity not only of languages, but of nationalities among both the other guests and the crew. From what I was told, there were 70 countries represented among the crew and who knows how many more among the other guests. My kids heard all kinds of languages aboard the ship during the time they were there and Vanessa always asked what they were. Plus, we met people from the Philippines, Nicaragua, Costa Rica, Colombia, Romania, Peru, England, Brazil, Puerto Rico, Japan, Panama, Canada and from a lot of different parts of the U.S. Sounds like heaven for someone raising bilingual and bicultural kinds, ¿no creen?

I have a lot more to share with you about this amazing experience, but I’ll leave it for another post. I don’t want to overwhelm you!

Excuse Me, What Language Are You Speaking?

Take Your Bilingual Kids on a Cultural Journey Aboard a Cruise
Pirates of the Caribbean Wants You to Go to the Mexican Riviera on a Disney Cruise!
Mexico’s President Takes Us On a Royal Tour
30 Comments

WOW- increíble!!!!!! I can’t wait to see your other posts!!! I’ve never been on a cruise with kids and I had no idea that they had so many activities for kids…

it was a fantastic voyage and a pleasure meeting your family! I was also impressed by the diversity of the crew.

I love the Caribbean cruise it is so relaxing. I love to do it again next year. Thanks for sharing your experience.

orthomol Vitamins for teenagers in it something is also idea excellent, I support.

I have read a lot about this and interested in learning more. Can you write another article with more information or possible point me in the right direct?

Jut wsh to say your aticl i asamazing. Th clarity for your ost is simply xellent ani an assume you are knowledgeble on ths ubject.Well together with yur pemissn alloω me to clutch your feed to κeep up to date with approhingpοt. Thank yu one mllin nd plae kep uρthe enoyable work.

It’s just like you understand my mind! You gaze to find out so much about the following, such as you submitted the book inside or something. I believe that you recently can do with some per-cent for you to strength the message household a bit, nonetheless apart from that, it is excellent website. An excellent study. We’ll absolutely return.

There’s some fantastic Japanese web sites in various subjects like pictures, Japanimation and radio but many are just reachable from Japan. I hope this video is useful to visitors of spanglishbaby.com as it hows how you can use a Japanese proxy to get them from anywhere.

We have been to both places as a family as well. We loved the fine white sand of the Labadee beach, and Cozumel of course had great food and great snorkeling.

Awesome site here! And your web page tons right up very quick! Precisely what hosting company are you employing? Am i able to make your affiliate website link for your coordinator? I’d prefer my website rich up as promptly while the one you have hahah

Thinking of traveling? Go for the best deals in the metro.

Travel and enjoy your vacations because you deserve it.

If you are going for most excellent contents like I do, just pay a visit this site every day since it provides feature contents, thanks|

Woah this site can be wonderful everyone loves examining your articles. Carry on the good work! You are aware of, plenty of person’s feel the need close to in this info, you may guide these people enormously house cleaning service Huntington Beach.

I found some good info in your site and bookmarked to visit again . Thanks.

vitamins Very much a prompt reply

Hello there. I discovered your website the use of msn. This is the really well created report Blog Anunciosvip.es. I will be sure to save the idea along with go back to get more info of this beneficial info. Just posting. We’ll unquestionably recovery.

So much enjoyment and fun on these best travel packages.

Remarkable problems in this article. I am just quite content to visit your report. Thanks a lot a lot with this particular awaiting speak to anyone.. proxies i can use Do you want to please decrease me a e-mail?

Get the awesome cheapest package on some travel tours.

We went on a cruise with our kids that also went to Labadee and Cozumel. It was not only fun to do as a family, but we also thought it was an educational experience for the kids in seeing other places and cultures. In a way, even the cruise ship was an education.

I take care of such information much. I was looking for this certain info for a long time. Thanks and good luck.

It is actually actually a nice and helpful part of info.
I’m glad that you just shared this helpful information around.
Please keep us informed like this. Thanks for sharing.

I was suggested this website by my cousin. I’m not sure whether this post is written by him as nobody else know such detailed about my trouble. You’re wonderful! Thanks!

My cousin proposed I may similar to this website. They was absolutely correct. The following send basically designed my evening tutors . You can’t consider exactly how a whole lot time period I had put together wasted for this details! Thanks!

Hello there. Today the use of yahoo. It is a really well written content. I most certainly will be sure to take a note of it and are available to discover more of your strategies.. language learning Information post. I will unquestionably recovery.