How My Bilingual Children Learned to Read and Write in Spanish 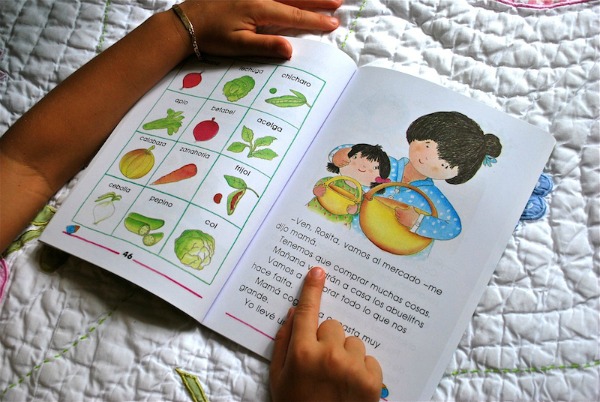 When my eldest daughter and son began to read in kindergarten a couple of years ago — in English— I was ecstatic. I love books, and had been reading to them in both Spanish and English since they were little. And then, it hit me. When would they begin to read in Spanish?

Being able to read in Spanish is not just an advantage during travel in Latin America or Spain. It’s so much more! Reading (and writing) in Spanish means our kids can send emails to their cousins, or write Christmas cards to their abuelitos — actively maintaining relationships (and their language skills) when school life is full of English. Being biliterate gives our children the opportunity to fully participate in Latin culture, by mastering the nuances of the language and appreciating children’s literature in its original form (not through translations!). Reading is an extremely efficient way to expand vocabulary and familiarity with spelling and the written language. Furthermore, as our children read more in Spanish, they will be exposed to styles and varieties of the language that they might not hear otherwise, and books offer them access to words and syntax that are different from what they might hear at home.

During graduate school, I had read numerous times that children who can read in one language can normally transfer their reading (decoding) skills to the second language without much difficulty — as long as the languages use the same alphabet, of course. While some parents begin to practice flashcards of Spanish words with their toddlers, a slightly easier route is to wait until the child can read in the majority language (or in our case, English) before reading in their weaker language (in our case, Spanish).

The summer after kindergarten I was confident that my kids had mastered the basics of reading: they knew we read left to right, they understood that the letters represented sounds, sound chunks put together would form words, words had meanings…. I armed myself with numerous “beginning to read” books that I had bought in Mexico, and we began our journey towards biliteracy.

We began to read even more in Spanish. As I read, I let my children follow the text with their fingers. We requested books in Spanish from the library that covered topics my kids were interested in: animals, princesses, soccer.  As I read, I point out phonetic differences “No pronuncies la ‘h’ en español.” “See how an e at the end of the word is not silent in Spanish?” 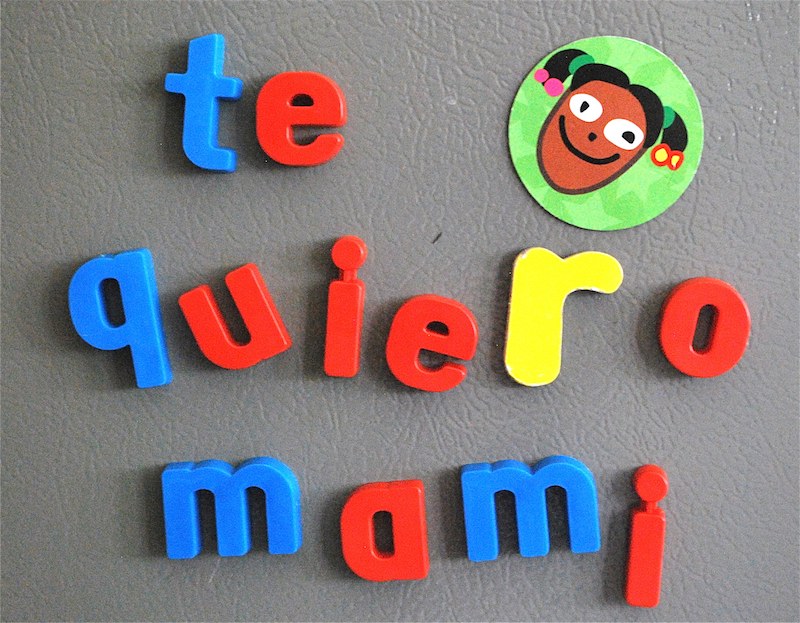 The more a child reads (in any language), the more likely she is to reach a reasonable level of writing and spelling. We played word games in Spanish, like hangman, Scrabble, and Scattergories. I call out words while I’m cooking, and they spell them with magnetic letters or practice writing with dry erase markers on our placemats. Using Discovery’s Puzzlemaker, I make up Spanish crossword puzzles or wordfinds. Now that they are becoming more proficient in reading Spanish, they can read the easier books to my younger children.

Once your child begins to read in Spanish — don’t stop reading to them! It may take a while before their reading fluency is at a level to pay more attention to the story than just the language. Find stories written by Spanish-speaking authors, such as acclaimed children’s author Jaime Alfonso Sandoval, from Mexico. Choose stories to read aloud that challenge their language and might be too difficult for them to read themselves. Although originally written in English, this summer we are tackling Harry Potter in Spanish. My kids are so excited and motivated to get to the next chapter, they are the ones reminding me to read books before bed.

This summer, immerse your family in children’s literature in Spanish, and witness your children emerging as biliterate readers and writers.

To Teach My Daugther to Read in Spanish First or Not?
4 Tips From La Maestra to Help Bilingual Children ‘Think More’ as They Read
Raising Bilingual Readers:The Art of Reading to Children in a Bilingual Home
23 Comments

Wow–I’m so impressed that you’re going to try to read Harry Potter in Spanish. Wonder if it’s published in Mandarin?

It must be published in Mandarin- I think I read somewhere that it has been translated into 60+ languages!:) The vocabulary is quite difficult because of the made-up/fantasy words. We plan on watching the first movie in Spanish when we’re finished!

This is so inspiring! I’ll be starting to homeschool this fall & it overwhelms me sometimes to think about teaching them to read in both languages. It’s great to listen to someone else’s success in raising biliterate kids. BTW what’s the book in the picture? Love the glossary type page on the right.

Carla: that is so wonderful that you will be bilingual homeschooling! The literacy skills really do transfer- so whichever language you choose to teach them to read, the 2nd language will be easier since they already understand the basics. The book is from Mexico and I couldn’t find it on amazon to give you a link, but it’s Juanito y Rosita. I love all of the early Spanish readers such as the “rookie readers” in Spanish, “Hola, lector!” readers, “Lee y aprende,” etc. My library carries a lot of them, and also I request them through interlibrary loans (most libraries have this program, which lets you request titles that they don’t have in their collection). Such an exciting journey!:)

THis is great information. You are such an amazing mom!! You definetely inspire me!

Thanks Lin! I think it’s important for moms to share our knowledge and resources so that we can learn from each other!

I love how you foster in your children to read also in Spanish. I have two boys, one 4, and my youngest is almost 3. They speak fluently Spanish and are starting to speak English, but my main concern is to teach them to read in Spanish after they go to school when English will be primary. I also read to them Spanish books I brought from Colombia (my home country), and I even wrote a children’s book in Spanish (my passion is writing) that I hope it will be like our bible at home so they learn to love and read the language, after they learn to read in English. My book is available in Amazon if anyone is interested, but I do stress the importance in every parent to read these books in Spanish to children to help them acquire literacy in both languages if they are interested in help their children be bilingual. Congratulations for your site!

Thanks Isabel! I’ll check it out. Congratulations on writing a book! I am sure your children will witness your love of writing and reading, and become little readers and authors themselves:).

Great article! I am totally going to copy you and after kindergarten plan on starting with B on learning to read in Spanish. He is already starting to recognize some Spanish words and to notice some differences (you do pronounce the e at the end of a word, you don’t pronounce the h). I’m encouraged to hear it isn’t hard once they have a good foundation in one language. It is so important to me that they can read and write in Spanish as well as speak it.

Thanks Sara! It is so important for us too that the kids can read and write in Spanish- and what an asset to learn earlier. It’s fun to see them notice spelling and then change the way they think about the word. For example Vivi said “‘beinte’ is ‘veinte’? But why is it with a v?!” Or “I thought it was pengüino, not pingüino!” They also thought dedo was spelled “thetho” or something…. So fascinating!

Thanks Becky. This was so helpful! Biliteracy, great concept.

Thanks for posting this. My son (4) is really interested in learning how to read. He goes to a English preschool but my husband has started to teach him how to read. His teacher also said that he is very interested in learning. I speak to him in Spanish only and always read to him in Spanish at bedtime (I translate all English books). I wonder if it would be confusing for him to learn how to read in Spanish at the same time he is learning it in English. Maybe I should wait a bit longer. When I came to the USA, I brought with me several reading/writing books for beginners and I look forward to start using them!

I have found that if kids are interested in learning to read, that usually means they are ready. For some kids it doesn’t come until they are older- how cool that your 4 year old is so interested! Start learning the letters and the sounds they make in Spanish. Then use a lot of repetition with really simple books, and pick out some “sight words” that he can read, sounding them out with you. It’s so wonderful that you have already been reading a lot to him- this is the foundation he needs!:)

Okay you are right, YouTube is most excellent video sharing web site, as YouTube is a lightly no much streaming time rather than other blogs.

It’s a shame you don’t have a donate button! I’d definitely donate to this fantastic
blog! I guess for now i’ll settle for bookmarking and adding your
RSS feed to my Google account. I look forward to brand new updates and will talk about this blog with my Facebook group.

Hello to all, how is the whole thing, I think every one is getting more from this
website, and your views are fastidious in favor
of new users.

You actually make it appear so easy together with your presentation however I find this
matter to be actually one thing that I believe I would never understand.
It sort of feels too complicated and very large for me.
I am looking ahead in your next post, I will try to get the
hold of it!

Hi, I do think this is an excellent site. I stumbledupon it

I may return yet again since I saved
as a favorite it. Money and freedom is the greatest way to change, may you
be rich and continue to help others.

Hmm is anyone else having problems with the images on this blog loading?
I’m trying to figure out if its a problem on my end
or if it’s the blog. Any feed-back would be greatly appreciated.

This website was… how do you say it? Relevant!!
Finally I have found something that helped me. Appreciate it!

What web host are you using? Can I am getting your affiliate link to
your host? I wish my website loaded up as quickly as yours lol

A motivating discussion is worth comment. There’s no doubt that that
you need to publish more about this subject, it may not be a taboo subject
but usually folks don’t speak about such subjects. To the next!
Kind regards!!