I Was Just Teased At Pixar. ¡Quiero Más BRAVE! 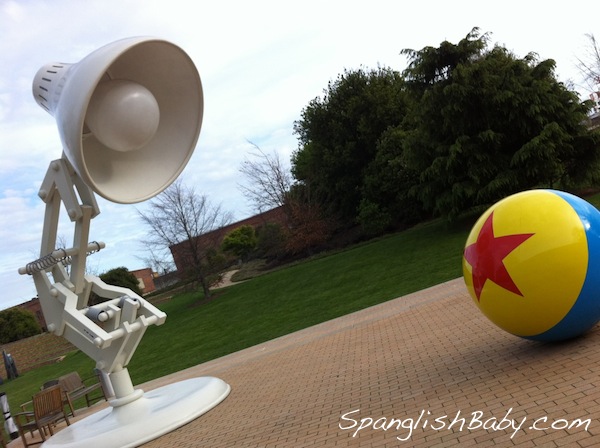 I just feel like a child invited to Disneyland for the first time and not allowed to get on any of the rides!

Last week I told you I had received an invitation from Disney to visit the famed Pixar Animation Studios in Emeryville (in the California Bay Area) where the final touches to the movie Brave are still being made. The whole group of mom bloggers and traditional media arrived today to San Francisco and we were quickly transported in a bus to Pixar.

Upon our arrival we were all escorted into a private screening room, not before we had to let go of the tight grasp on our cell phones, cameras and any other electronic device and then were patted down with more care than at any airport security terminal. Understandably, Disney and Pixar are serious about making sure nothing of what we were about to see of the animated film Brave comes out to the public just yet. However, they were excellent at teasing us big time!

After a brief intro from the movie´s director, Mark Andrews, and producer, Katherine Sarafian, and a warning that the first thirty minutes of the film we were about to watch were not completely finished, we got to watch the Academy Award nominated short film La Luna, which will appear right before Brave in theaters. La Luna´s director Enrico Casarosa was there with us as we all gasped in reaction to the beautiful imagery and tender story he created.

And then, we got to be the first media ever to see the first thirty minutes of Brave. I wished I could tell you exactly what I saw, but I´m not allowed to just yet by the powers-to-be at Disney. I´m just writing this to tease you so I´m not the only one who feels teased after being so enthralled and into the movie and then have it end abruptly after 30 minutes and leaving me wanting más! Now, I´ll just have to wait until this summer (June 22nd is the official release date) to watch the whole movie.

What I can tell you is that all I could think about while watching the fiery Merida-the first Pixar female heroine-and her mom, the Queen, interact, all I could think about is my own fiery, fierce and courageous bilingual princesa at home. The mother-daughter relationship portrayed in the film has left me examining my own and how I can continue to encourage her soul to develop and listen to her…really, really listen to her in all her glory.

Just check out this trailer and you´ll see exactly what I´m talking about.

Tell me, what do you thing about Disney*Pixar´s Brave so far?

How Early Should We Talk to Our Children About Race?

The Walt Disney Family Museum: A Journey of Inspiration
Disney Junior’s Sofia the First Is Supposed To Be Latina? Why I’m not buying it
Interviews from Disney’s ‘Sofia the First’ Lavender Carpet! {Video}
27 Comments

What fun you must have had amiga Ana! Thank you for sharing the experience. This is one movie that will have us all applauding the female heroine! Way to go Pixar & Disney!

I definitely had fun, Beth! Will be sharing a lot more soon.

Read ur post is just incredible what an amazing oportunity you had. I can’t wait to take my little one to watch “Brave” she is already asking to learn how to use “el arco” she’ll love it and to see a smile on her face just makes everything better.

My girl is learning to use the arco y flecha as well! Of course, it’s the Brave one, but I’m so glad she went for that instead of the doll.
I only got to watch the first 30 minutes and am seriously anxious to watch it all. We’ve seen all the trailers over and over again because my girl just can’t get enough of Merida.

It truly is best a chance to make a handful of strategies for that future in fact it is time to feel special. We’ve read this publish in case I might just I need to counsel you a number of attention-grabbing factors and also information. Maybe you might produce pursuing content referring to this information. I wish to understand a lot more difficulties regarding this!

Pixar and dreamworksanimation are the best when it comes to high defination animated movies.. i have seen almost all the movies of these both and desperately waiting for the upcoming ones like cars 3 and how to train your dragon 2

Pixar and dreamworksanimation are the best when it comes to high definition animated movies.. i have seen almost all the movies of these both and desperately waiting for the upcoming ones like cars 3 and how to train your dragon 2..

Amaze, wonderful website structure! The span of time have you been writing a blog to get? you make posting glimpse easy. The whole glimpse of mas mobile tools this web site is amazing, when efficiently because content material!

Unsecured loans are frequently set on a fixed term, so this means, there is
an understanding between the bank and the customer on a period where a repaired amount will
be paid every month to get a specific phase.

Here is my homepage: payday loan no credit checks,
Cinda,

Now I am going to do my breakfast, afterward having my breakfast coming yet again to
read further news.

What’s Happening i am new to this, I stumbled upon this I’ve discovered It absolutely helpful and it has helped
me out loads. I’m hoping to contribute & aid other users like its helped me.
Good job.

Do you have any video of that? I’d like to find out some additional information.

Thus, with the construction of technological progress in China’s rapid development, integration of
solar energy and architecture requirements and is more urgent, it has been in the doldrums
to the plate in Chona has brought new opportunities for development.
Not only does Honda make top-selling automobiles, they have also used their expertise to make boat motors as well.
Convenient ower and mode buttons, an easily adjustabl hook
annd loop aat the waist, and a one size fits all bild
keeps things comfortahle and accessible.

They should be relatively challenging, but you should ensure that you can meet them,
with a minimum of pain, every time. I know some people mix it with oatmeal and make protein cookies out of it.
7 million which was up $ 110 million compared to the year previous.

Fantastic website you have hre but I was curious if
you knew of any discussion boards that cover the same
topics talked about in this article? I’d really love to be a part
of group where I can get comments from other experienced individuals
that share the same interest. If you have any suggestions, please let me
know. Thanks!

They should be relatively challenging, but you should ensure that you can meet
them, with a minimum of pain, every time. What does this growing trend
represent to the average person, and how does it relate to
the current state of the economy. Right after reading this Vi – Salus evaluation you are most likely thinking that Vi – Salus is an excellent opportunity as well as are
ready to get started.

What additional adds to this theory is the reported
UFO sightings across the planet to date.

Hello to every one, the contents existing
at this web page are truly awesome for people knowledge, well, keep
up the nice work fellows.

Right away I am going away to do my breakfast, afterward having my breakfast coming again to read more news.

Thankfulness to my father who stated to me concerning this blog, this website
is actually amazing.

Hello there! This blog post couldn’t be written muc better!
Looking aat this article reminds me of my previous roommate!
He continually kept talking about this. I’ll send this article to him.
Pretty surde he will have a very good read.
Many thanks foor sharing!

Remarkable! Its really awesome piece of writing, I have got much clear idea about from this paragraph.

Hi, I believe your bloig could possibly be having internet browser
compatibility issues. When I look at your site in Safari, iit looks fine however,
if opening in I.E., it haas some overlapping issues. I merely
wnted to provide you with a quick heads up! Apartt from that, excellent blog!

Guides form the backbone of a river rafting company, and Grand Canyon Whitewater
was pleased to warmly welcome the guides of Diamond River Adventures to
join the neww outfit. ” Around 1900, he returned to Wisconsin and set up his own pattern-making shop. But the good thing is that the bass are still biting and the artificial bite has been as good as the live bait bite has been using wild shiners.