Posadas in Mexico: The Largest Nativity Scene in the World 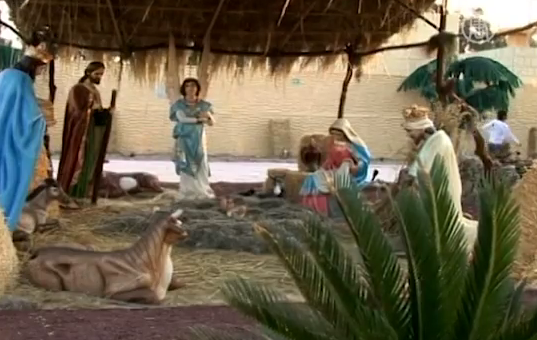 The tradition of posadas have begun and Mexico honors this celebration a lo grande. So big, that they’ve even broke two World Guinness records this year for having the biggest nativity scene, as well as the most amount of figures in one scene.

This massive nativity scene, which is a recreation of what the city of Belén must have looked like two centuries ago, has been set up on the parking lot of the famous Estadio Azteca of Mexico City. The size of the whole scene covers the extent of four football fields!

The idea behind such a massive endeavor is to bring back the essence of what the holiday of Christmas is originally about–the birth of Jesus as told by the Bible. Living in the United States, it´s easy to forget that this holiday has a strong, religious base behind it. Many in Mexico want to make sure that this essence is not forgotten and have created this record-breaking nativity scene–with a two million dollar investment to make it possible–with 57 scenes which recount the passage of Mary and Joseph upon their entrance to Bethlehem.

A sort of biblical playground for children, the life-size figures, such as the three wise men, an angel, camels, burros and more, the kids can interact with were made by Mexican artisans, and some even have movement.

I´ve spent many Christmas holidays in México and always loved how rich in tradition these celebrations were. The food, the drinks, the piñatas, the posadas everywhere, the villancicos in the air. This Nativity scene is just one more mark of pride for the Mexico which loves its traditions so much it has to be the largest in the world.

To get a glimpse of the largest nativity scene in the world (at least for this year!) take a look at this video below (in Spanish):

The nativity will remain open until January 15th. If you happen to be in Mexico City and visit this, please share a picture with us on our Facebook wall!

This post is part of the Mexico Today Posadas blog hop. If you have any articles about posadas and holiday celebrations in Mexico, please link it here so we can give it the love!

I’m planning to head over to the stadium and check it out later on this week. I’ll be sure to post some photos and share one on your FB wall too!

Please do!! Lucky, lucky you!

My husband will be in el DF for New Years- I will see if he can get some pictures:). What a cool place for families to explore! I love that they did this!:)