Yes, it is a Great Idea to Raise them Bilingual! 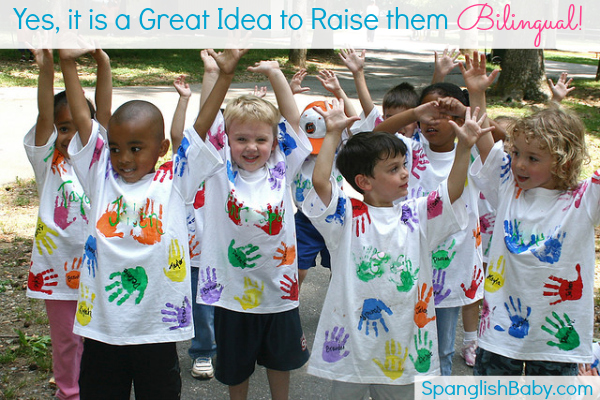 The following is a guest post by bilingualism expert, Dr. Fred Genesee, Professor of Psychology at McGill University in Canada.

There are many good reasons for raising children bilingually. First and foremost are personal and family reasons. If members of the immediate family or extended family include people who speak other languages, then it is a benefit for everyone if your child speaks their languages. This is especially true if some family members speak only one language and might be cut off from communication with your child if he/she does not learn their language.

The advantages of being bilingual or multilingual go beyond the family. Research has shown that children who are fluent in two languages also have cognitive advantages in comparison to those who speak only one language.  For example, they are better at solving problems that involve focusing on relevant information while ignoring irrelevant information. Even bilinguals who are 60 or 70 years of age demonstrate these kinds of advantages.

Clearly, there are also advantages that come from knowing other languages when you child is old enough to read and write and use computers. There is a wealth of information available in print, electronic and other media nowadays. The potential for accessing all that information is much greater for those who know more than one language and are limited for those who know only one. Of course, knowing a language like English is important because it is the most widely used second language in the world.  It is widely used for communication about science, politics, financial matters, education, and other topics, and is used extensively on the internet as well as in print and on radio, television, and so on. People who speak additional languages along with English have access to many more of these sources of information than those who know only English.

Finally, there are many personal advantages from knowing additional languages. There are lots of job opportunities in international business and government that require competence in two or more languages. Large international businesses need well educated bilinguals to work in the global market place; governments need multilinguals who can work in embassies and government offices around the world; and many other sectors of the economy (such as education, science) have job opportunities for those who are bilingual. Travel opportunities are also much greater for those who speak additional languages.

This is part of an article that originally appeared in the Jan-Feb 2007 issue of Multlingual Living Magazine (Jan-Feb 2007): www.biculturalfamily.org under a different title.

Video of the Week: UP

Inspired to Give a Hand

Wow! I just bumped into this website. I love it! And, I really enjoyed reading this article by Fred Genesee on the advantages of being bilingual. Just last week I decided to begin speaking in Spanish to my 4 children, and boy, that was really, really challenging. I wrote a post on my experience, thus far — and provide some recommendations on how to ease into this important transition.

You may definitely see your an understanding of the effort you’re posting. The globe desires for much more passionate writers just like you exactly who are certainly not reluctant to mention where did they consider. Constantly comply with a person’s cardiovascular system.. Psychometric Testing , Leadership Training , Leadership, Business Psychology, Organisational Psychology,