Even More Reasons to Raise Bilingual Kids: The Latest Studies 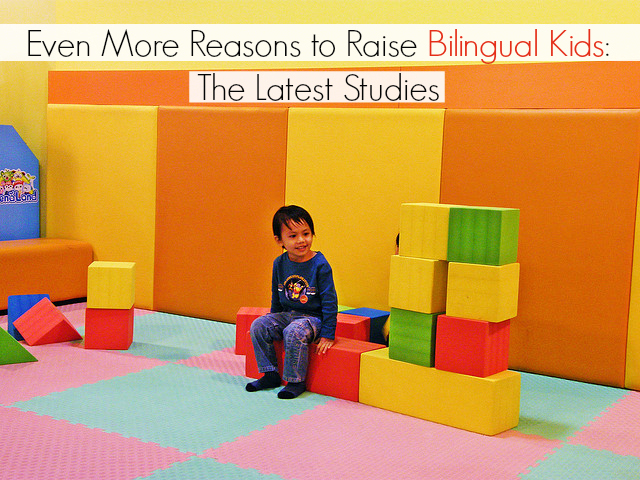 When we launched SpanglishBaby almost six months ago, I wrote a post about why raise bilingual children. In the weeks and months following, we’ve tried to write about or at least mention the latest studies related to bilingualism which have given us even more reasons why it’s such a great decision to raise our children bilingual. But we’ve never really taken a closer, more detailed look at why bilingualism is one of the best gifts we can give our kids.

I guess the most remarkable thing about all these studies is that they prove the human brain is truly amazing. According to the latest study, “babies being raised bilingual — by simply speaking to them in two languages — can learn both in the time it takes most babies to learn one.” The main reason has to do with our brain’s flexibility and how exposure to two languages from early on increases this characteristic.

The study, conducted by scientists in Italy’s International School for Advanced Studies, was published this month in the journal Science and it tested more than 40 12-month old bilingual and monolingual babies. Although it seems kind of impossible to test children this young, researchers do so by tracking eye gazing. Here’s how it works:

“Make a fun toy appear on one side or the other whenever there’s a particular sound. The baby quickly learns to look on that side whenever he or she hears a brand-new but similar sound. Noninvasive brain scans document how the brain is processing and imprinting language. In this particular study, 44 12-month-olds were tested to see how they recognized three-syllable patterns — nonsense words, just to test sound learning. Sure enough, gaze-tracking showed the bilingual babies learned two kinds of patterns at the same time — like lo-ba-lo or lo-lo-ba — while the one-language babies learned only one.”

Hopefully this valuable information will be enough to, once and for all, debunk some of the major myths associated with bilingualism:

Growing up with two or more languages will only confuse your child.

This misconception has been around for a long time and apparently it goes back to issues of immigration in the United States. Educators used to tell immigrant parents that it was better for their children to speak English at home – erroneously stating that early exposure to two languages put children at a disadvantage.

It takes longer for bilingual children to learn how to speak.

The author of Raising a Bilingual Child, Barbara Zurer Pearson, says this myth is not supported by any scientific evidence. In fact, “with respect to most developmental language milestones, bilinguals are either at the same level as or ahead of monolinguals.”

They will only end up mixing both languages.

This is inevitable and it’s harmless. But to monolinguals, it’s proof that the child isn’t really able to tell his languages apart. The actual term for this behavior is “code-switching” and there’s absolutely nothing wrong with it. I do it and it’s not because I’m not completely fluent in both English and Spanish, but because sometimes a word sounds better in a particular language.

Another recent study conducted by researchers at Cornell Language Acquisition Lab concluded that bilingual children are better able to concentrate than their monolingual counterparts. According to the scientists, “children who learn a second language can maintain attention despite outside stimuli better than children who know only one language.” This ability to better concentrate can positively contribute to a child’s future academic success, the study went on to explain.

What parent wouldn’t want to provide their children with that possibility?

As if all these were not reasons enough to raise bilingual children, a Northwestern University study to be published next month, found that it’s easier for bilingual people than for monolingual ones to learn a new foreign language. Furthermore, the advantage “persists even when the new language they study is completely different from the languages they already know.”

In another words, if we’d like to introduce our children to a third language or they choose to learn one later on in their lives, they’ll have a much easier time thanks to our decision to raise them bilingual early on.

Fascinating, no? As I’ve mentioned in the past, no matter how you look at it, raising bilingual children is a win-win situation.

I hope you have the time to read all the studies mentioned here. They are definitely worth it. We’d love to know what you make of the findings, so please feel free to share your thoughts with us!

Raising Bilingual Readers:The Art of Reading to Children in a Bilingual Home

Bilingual Babies: The Sooner, The Better
3 Important Factors to Consider When Raising a Bilingual Child
Bilingual is Better: Bilingualism is Better for Your Heart
9 Comments

I like the “because sometimes a word sounds better in a particular language” line — I know exactly how you feel.

This is a great blog. My wife is Mongolian Chinese, and I’m American. Her parents are native Mongolian and Mandarin speakers, but she grew up never learning Mongolian. My parents are monolingual, and over the last seven or so years I’ve pushed my Chinese up to fluency.

We have a 13-month old in the house now, and it’s amazing how quickly he’s learning. He already can understand quite a bit in both languages, and the his first word (‘ba ba’ — ‘daddy’ in Mandarin) has been followed by several in both English and Mandarin. The kid’s so lucky — he’s going to have better English than my wife and better Chinese than me in about two more years

Congratulation on raising a bilingual child, John! And thanks for visiting!! You’re totally right, your son is a very lucky boy and yes, it is amazing how quickly they learn!!

Good luck and congrats on becoming fluent in Chinese yourself! That’s no easy task!!

Thanks for this – very timely for me. Our problem – both my husband and myself have English as our first language, but I can speak Indonesian reasonably well and bits of French. My husband doesn’t speak Indonesian, and has less French than me – I don’t want him to be left out of discussions with our daughter so haven’t been using Indonesian or French with her so far (other than songs and occasional words). To add to the mix – my mother also can speak indonesian. So … Indonesian & English? French & English (would be hard work for both hubby and me) or all 3? or just English?

Dear Danielle,
You are not alone raising multilingual kids, I have 2 of my own, they are 6 and 3 yo and they can pick up more than 3 languages while the eldest one start the fourth one slowly . I have found no difficulties in raising them in even 3 languages, what I feel the success keys are all start at home. Me and my husband, we are communicating in English, me and my kids are Bahasa Indonesia, and kids to dad in Urdu (native language of Pakistani), Initial they r still (and still is) using some words in English or in Urdu to the words they couldn’t get in bahasa, I don’t think it’s a big deal, because every kids will develop their vocabulary accordingly.

Just check out my blog

another point – I have taught a student whose heritage language was French. By late primary, she was refusing to speak any french and chose to study indonesian at high school. By the time I met her (Year 10 – approx 15 years old) she was refusing to try in Indonesian, and still refusing to speak French. How do I ensure that my little girl (now 15 months) loves languages rather than hating them? Aduh! Saya bingung!

Anybody who says learning two languages at once will slow language acquisition needs to meet my Cotorra. Glad new studies are debunking that myth.

I raised two bilingual children and they succed in school with good grades took additional spanish classes in school and went on attend college. They both have found the they being bilingual has made a difference in their employment. I taught ESL in the 70′s to spanish speaking children and their parents. The children went on to do quite well in their classrooms and keeping their spanish language and heritage.

My husband and I were born in Mexico and brought to the U.S.A when we were preschoolers. Our native language is Spanish. We spoke spanish at home and English at school “stictly”. When we both met we interacted speaking only English. We got married and now have three beautiful children. I tried speaking all spanish with my first born but wasn’t consistent. All three children speak the community language which is English. I wish I could say thier domminant language was Spanish…it’s not. The oldest is 9 and the youngest is 4. It’s hard to balance the languages since my husbands and my language is mostly dominant in Eglish. We had no formal education to support our native language so this makes it hard to sometime be discriptive in our native language. Is it too late to teach my children their harritage language? Where do I get support? Thank you