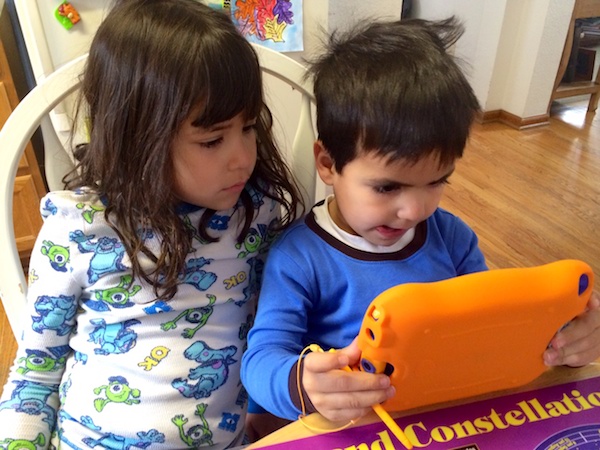 My kids are too little to understand what New Year’s resolutions are all about, so I’m making just one for them. I’ve never been too much into resolutions because they’re so hard to keep, but this one is of extreme importance, and I plan on doing everything in my power to make it a reality in 2014 and in the years to come.

You see, my kids have started doing something I dreaded ever since Santiago was born: they are speaking English to each other. It may not sound like a big deal, but it is because they’re already surrounded by enough English on a daily basis for it to be the language of choice between them. While I knew this was inevitable, I wasn’t expecting it to happen until later on in their lives. After all, Santiago is only 4 and I don’t really think he’s fully bilingual just yet. I mean, his English has exploded in the last year since he started going to preschool full time, but his vocabulary continues to be much more extensive in Spanish.

Even so, Vanessa and him seem to prefer speaking in English more and more lately. I don’t think they’ve made a conscious decision or anything like that and it’s not like English is the only language they use to communicate, but I’ve noticed it’s their language of choice, especially when they’re playing.

So, in more than one occasion I’ve had to remind them that we only speak Spanish at home. I must admit I’ve felt a bit bad saying that to them even though I’ve made sure not to say it in a negative or reprimanding way, but I feel like if I don’t put a stop to it now, it’ll very soon be a lost battle.

I realize that, as they get older, there may not be much I can do to enforce the “Spanish only” rule at home, but for now, I have to do everything I can. They haven’t really complained about it, but I feel like I have to be on top of it all the time because they seem to forget. And that’s exactly what I’m trying to avoid: for them to feel like speaking English to each other is the most natural thing in the world.

I know some may not agree and even criticize me for what I’m doing, but my kids’ first language is Spanish and I plan on doing everything in my power to keep it that way as long as possible.

IMPORTANT: The Future of SpanglishBaby

English is Invading Our Home
The Vital Role of Nannies When Raising Bilingual Kids
Reading in English and Translating into Spanish… at 5 years old!
37 Comments

Good point Manolo! This reminds me of when I took my son to Mexico. He didn’t have any trouble addressing my friends (adults) in Spanish but when I took him to the playground…he kept trying to initiate play in English because that was all he knew! We practiced a few times and it got better. Also, my son used to always role play with toys in English but my husband has made a point of finding translated cartoons in Spanish on youtube. I’m not arguing that TV programming is educational but after we did this his toys did start to speak Spanish and even used phrases that he’d only heard on youtube. Maybe some family games in Spanish? And I think your idea of reminding them that they speak Spanish is home is something they will ultimately internalize and be proud of on their own.

Hi, Andrea! I love what you share about your husband finding translated cartoons in Spanish for your son. The little TV my kids watch tends to be solely in Spanish too! I think the biggest issue at our home, as Manolo pointed out, is that his play vocabulary stems from the many hours he spends with his little English-speaking friends in school.

Spanish continues to be my kids’ first language, but I want to make sure to keep it that way for as long as possible!

Hi Roxana, you are doing the right thing and your kids will thank you for it later in life. You know you are doing what is most beneficial for their future, so don’t feel bad about it. Just like you wouldn’t let them have their own mind about eating sweets all day, you also know what is best for them so they become bilingual.

I just wanted to say thank you to you , and others who have posted similar stories on this site and others. I feel like I am fighting a losing battle, but I am soldiering on! I just went to meet with a church who has service in both languages (Spanish and English) and I am hoping to start visiting there as well as the church where we already attend. I have tried to start a playgroup in my area but it didn’t work out. I think immersing them in the culture will be great and hopefully it will open up other doors to possibly more bilingual friends.

Building off Andrea, and I hate to admit it, but there are so may useful toys and tools on the internet and technology. Not that I’m recommending we stray away from traditional family education, but using newer technology in toys helps teach kids sometimes more than we can.

oops! sorry, just meant to place a comment in general!

Too bad we must return them.

I’ve benefited from an excellent page thanks page

I am just writing to make you be aware of what a superb discovery my cousin’s daughter found viewing your web site. She mastered a lot of details, with the inclusion of what it’s like to have an awesome helping style to let folks with no trouble learn about a number of tortuous things. You truly surpassed our desires. Many thanks for displaying these good, trusted, explanatory not to mention fun tips about this topic to Lizeth.

Very interesting subject , thanks for posting . “Ok. Sex is fine. Sex is good. Sex is GREAT Okay, okay, we need men for sex… Do we need so many” by Sybil Adelman.

wow thats good,,, thanks for shared

It a good shame you don contain a give money button! I definitely give money for this fantastic webpage! That i suppose for the time being il be satisfied bookmarking together with including an individual Feed that will my best Msn balance. That i appearance forward that will recent messages and definitely will share the web site utilizing my best Facebook or twitter team: )

Ah, yes, a catch-all post to explain why any post criticizing the absence of linked posts are Well done, mod this sub sucks Not a single post over 1k upvotes in the past 30 Quality content is

Asking questions are really fastidious thing if you are not understanding
anything entirely, but this post gives nice understanding even.

I was very happy to uncover this page. I want to to thank you for your time for this particularly wonderful read!!
I definitely really liked every bit of it and
i also have you book marked to look at new things on your blog.
link m88´s last post ..link m88

For all of you looking for exam dumps, use the itlibraries ones. I can vouch for them on the INCD1 and 2. Perfect score from the first try.

Latest valid dumps for the CCNA exam can be found on itlibraris.

Latest valid dumps for the MCSA exam can be found on itlibraries.

APK Authority is the best website to download latest APKs (most trusted versions) of the viral Android Apps absolutely free of cost.
So if you want to more about APK Authority visit our dedicated Website APK Authority

Leave a Reply to Rita Rosenback