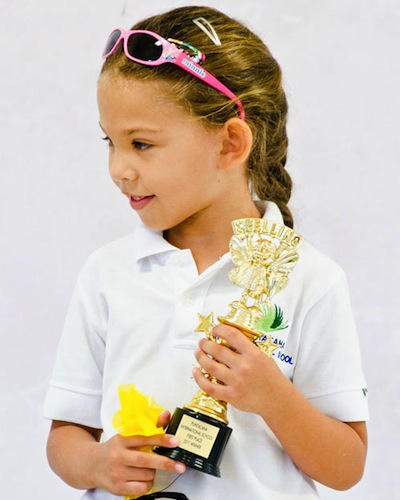 I don’t remember we ever discussed raising a multilingual child. It seems to me that it was always the obvious thing to do.

I am a bilingual Dominican; I speak Spanish and English. My husband is a bilingual Dane; he speaks Danish and English. We live in Punta Cana, a tourist enclave in the Dominican Republic. We have been together for nearly two decades, and choosing a common language at the beginning of our relationship was very easy: I had no patience for my husband’s stuttering Spanish.

When our daughter Nadia was born eight years ago, it seemed logical to raise our daughter as an English speaker, the lingua franca at home. We figured she would inevitably pick Spanish from school and friends, and we purposefully chose an all-Spanish daycare that she started attending before she could form more than a few words.

Danish was an entirely different story. We are half a world away from Denmark, we see my husband’s Danish family twice a year, and that includes our summers in Denmark. Worse yet, my husband spends months at a time away from home traveling abroad. Teaching Danish to our daughter was an experiment that seemed destined to fail.

But not speaking Danish was not a choice we could give her. Not everyone in my husband’s family speaks English. His dad does not, and, at the time, his nieces would not start learning English at school for another 10 years. Not teaching her Danish would have meant severing her from one half of her cultural identity and family. In the end we jumped in: sink or swim.

I am not completely sure there is a name for the method (or lack thereof) that we followed. I always spoke English to her, from the moment she was born. She would speak Spanish with my family, whenever they visited, and at daycare. My husband spoke Danish to her from the beginning. The results seemed uncertain for a while. By the time she was 18 months old it was obvious she understood all of us — as much as an 18-month-old can understand anything — but her limited vocabulary remained defiantly English, with the possible exception of the word “aguacate”, which she found hilarious.

We pushed forward, my husband pretending he could not understand her English, forcing her to speak Danish. A few weeks in daycare and she was forced to try and communicate her needs to the staff. Out of frustration, I assume, eventually the dam broke, and out came the neverending babbling in three distinct languages.

She’s 8 now, attending an international school, where, except for a daily hour of Spanish classes, she’s schooled in English. Her Danish continues to grow and improve, thanks to large doses of books, comics, music and online age-appropriate television when her father is not home, and long, meandering conversations and lackadaisical home schooling when he is. Our visits to Denmark, and my in-laws trips to Punta Cana every year help immensely. When we travel to Denmark, we try to pack as much travel, language and culture as is possible in four weeks.

Her English is above the average 8-year-old English speaker, with a rich vocabulary gifted to her by her insatiable reading habit. Spanish lags behind in vocabulary, but her diction, grammar and spelling are very good. Unfortunately she does not enjoy reading Spanish as much as I would like, and I hope that changes at some point. Her Danish is nearly on par with Danish kids her age, and her reading and writing is adequate for her age. She has a native but indeterminate accent in all three languages; I can loosely describe it as “neutral pronunciation”.

If I can leave a single idea with you, it would be this: Don’t give up. It can be done. Don’t listen to naysayers and the uninformed. You will not harm your child. Yes, your child might lag a bit at the beginning (it did not happen to our daughter). Yes, your child will be frustrated in the beginning, but all children get frustrated when they try to communicate complex ideas with a limited vocabulary. Persevere. You will be opening a world of opportunities for your child. You will be connecting your child with your family, culture, identity. 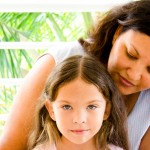 Clara Gonzalez is a food photographer and writer, founder of Aunt Clara’s Kitchen, and currently living in Punta Cana, Dominican Republic. Married to a Dane, Clara is mother to Nadia, a multicultural, multilingual child who loves books, Lucky Luke comics and Lego sets.

Being Bilingual: Shooting a General Mills Commercial in Spanish for Walmart

My Bilingual Daughter’s First Year in an English-only School
Is My Daughter Shy? Or Is She Not Bilingual Just Yet?
How Truly Bilingual is my Daughter?
6 Comments

I was excited to read about your trilingual success. We are also teaching our children three languages–Spanish, English, and German. I was worried that we would hinder the development of one of the languages, but so far it has been working.

I was born in NYC to Dominican parents but currently live in Germany with my German husband. My son is growing up multilingual as well. So it was great to hear someone of a similar background recount her experience.

Don’t you have a beautiful name?

You’d be surprised how many people thought we were crazy, starting with some doctors. Luckily I am surrounded by examples of successful multilingual children, so that served to encourage us. By far Danish is the biggest hurdle, but luckily it worked. If we could, anyone can.
Aunt Clara´s last post ..Berenjenas guisadas con cerdo (braised pork and eggplants)

Good for you for doing this for your daughter! Hopefully you will encourage others to stay the course! I have a coworker who had the opportunity to have their kids be trilingual, but chose to only do two languages because he thought it would be “too much” or “confuse them.” I feel like it was such a lost opportunity for them!

There are kids in our school that speak four or five languages. They are doing fine. It’s not that the parents are crazy, but this is a tourist area and some parents have moved for work from country to country with their kids, plus their home language(s). At three my daughter is not exceptional.
Aunt Clara´s last post ..Berenjenas guisadas con cerdo (braised pork and eggplants)

Hola Clara!
Loved your post! Yo tambien soy dominicana, casada con un Puertorriqueño, viviendo en Estados Unidos.
We are raising our 3 year old to be bilingual. where we live there are no dual immersion schools, not even bilingual schools. The only spanish is taught in the high schools of the area. So our daughter is in a all english day care, and now starting preeschool. All the spanish she knows come a very intensive all spanish speaking home. We try to suround her with as many videos, books and games as we can.
So far her spanish vocabulary I think is equal to other kids her age would be, but sadly we don’t have any spanish speaking children around for her to interact with, so at times I think she has a more grown up vocabulary. Her english is at par with kids her age, but there are certain things she is even ahead of.
Overall I thinks you and people like you are inspiration to so many of us trying to raise our children with an extra advantage to their future lives!
Gracias!