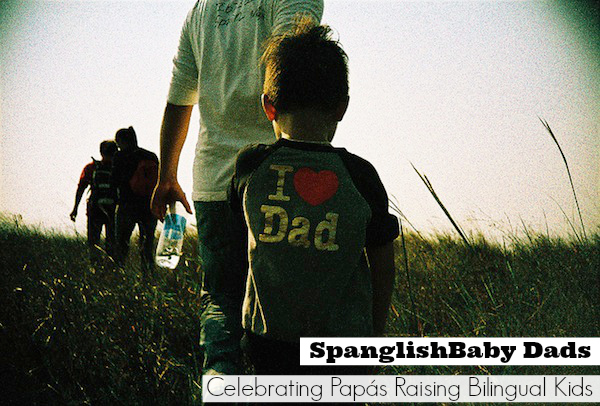 With Father’s Day coming up this weekend, we figured there was no better time to celebrate papás who are raising bilingual kids. While we tend to hear a lot more from moms than dads, the reality is that fathers play an integral role when raising kids in more than one language — even when they’re monolingual.

Raising bilingual kids is all about support and encouragement, and if the whole family is not on board, it can end up being a much more difficult task. So even when dad speaks only English, the fact that he agrees to and champions raising his children to speak two (or more) languages needs to be acknowledged and appreciated.

And then, in many cases, children grow up bilingual because of their bilingual dads — and these papás need to be celebrated too! So this year, we’re bringing back something we did two years ago in honor of Father’s Day: a week of SpanglishBaby Dads! We’re spending the rest of the week highlighting the stories of dads who are raising bilingual kids through guest posts they wrote about their experience.

While there are still not a lot of them blogging about the topic, we’re happy to report we’ve come across at least three new ones in the last months and we can’t wait to introduce them to you! And please, if you’re a dad raising bilingual children (or you know of one) and would like to write a guest post for us, we’d love to have you, so just let us know!

In the meantime, I’d like to thank all the dads out there for the essential role they play in raising children in more than one language — starting with my own husband. ¡Mil gracias port todo lo que hacen!

To read the posts written by SpanglishBaby Dads click on the links below. (We will be updating the list as this week progresses.)

- How A Meal Inspired A Father To Raise His Daughter Bilingual

- The Steps We’re Taking to Raise a Bilingual Daughter

-  How I Fell in Love with Spanish & Became a Bilingual Father

A Year In A Dual Immersion Kindergarten {Photos}