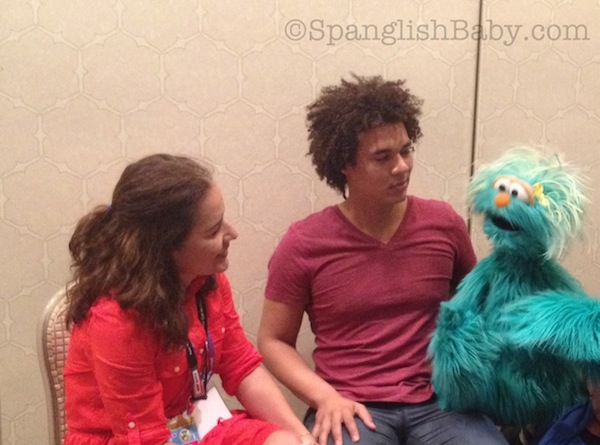 I just got back from PBS’ annual meeting, which took place in Miami this year and where I had the pleasure of meeting “Mando,” Sesame Street’s newest bilingual cast member who is Latino.

Ismael Cruz Córdova (Mando) is a charming and very talented 26-year-old actor who was born and raised in Puerto Rico and learned to speak English thanks to Sesame Street. I also had the chance to interview Carmen Osbah, who plays one of the other bilingual cast members — the lovable Rosita — and Carol-Lynn Parente, Sesame Street’s executive producer.

I must say I’m very pleased with Sesame Street’s continued commitment to represent a more diverse, multicultural and bilingual American neighborhood. I’m pretty sure you’ll love the new character Mando just as much as I already do, and so will our kids! I’m working on a more in-depth post with a lot of info about the new character and the actor who plays him,  but in the meantime we wanted to give you a taste of what’s to come in Sesame Street’s 44th season, so we’re sharing this short video clip which contains a special message for the SpanglishBaby familia from both Mando and Rosita.

Crayola Color Wonder Gets Rid of the Mess {Review}

Join a SpanglishBaby Playground Near You!

Cool, looking forward to it!

I just watched with my son Santiago and he thought the message was for him! Huge smile on his face! Can’t wait for your next post!

Loved seeing you and meeting Mando!