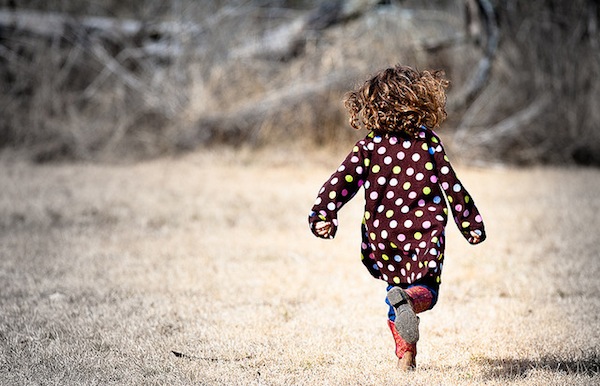 Since we have moved our daughter from a Spanish immersion daycare to one where English is spoken 100% of the time, we have noticed a few interesting things happening.

We have noticed that she will try using English phrases, like “get a diaper, please” in response to our Spanish request, “Agarra un pañal, por favor.” In fact, she frequently uses the following phrase, “No, mami es… I’m sorry” in response to my “lo siento.” This kind of dialogue extends to naming objects as well. For example, she shared with me upon picking her up from school, “Mami, mami, estaba volando en los swings.” I, of course, would affirm her statement by saying, “Te gustan los comlumpios, verdad?” Her response, as you might have guessed, “No mami es… swings.”

In previous posts I have mentioned how speaking Spanish is my right and by speaking it to my daughter 100% without accommodating to those who may not understand us is also the way I exhibit resiliency against an ever-evasive English society. My nena’s exposure to English this past month has increased to over 50% of her day as a result of attending an “English” daycare. Though I anticipated the experience being extremely hard emotionally; she has settled in happily with her teachers and peers.

As she’s developed her English speaking skills this past month, I started to notice that what I was researching about language acquisition as a doctoral student and what I was practicing with my daughter was extremely contradicting. Essentially, metalinguistic awareness (language awareness) is at the core of my research interests as a doctoral student. I found myself examining how the flow of two or more languages in the dual language classroom is and can be beneficial for developing an awareness of the diverse ways language works, yet contradicting what I was actually practicing with my own daughter. This started to bother me immensely to the point that I forced myself to reflect about what I believed to be true about language acquisition and what I was actually doing with my daughter.

Since reflecting on the disconnect between what I was researching and what I was modeling, we have been engaging in conversations about how many objects, people, and places have more than one name in English and Spanish. The experience has been amazing because I think she is also starting to realize that she speaks two languages. When I walk into her classroom to pick her up I can hear her attempting to communicate in English with her peers and when she notices that I’ve arrived she switches to Spanish.

Ultimately, I decided to connect theory to practice as a mother raising a multilingual daughter. Instead of constantly reiterating into “correct” or “puro” español the same statement she said in either English or in a beautiful mix of Spanish and English, I have been focusing on developing a cognitive skill that will benefit her academically, socially, and culturally: metalinguistic awareness.

The Importance of Play in Raising #BilingualKids

Great post! I’m experiencing the same thing with my 2 year old daughter and it does worry me because I’ve noticed that she has switched to English as her dominant language.

When she says an English word to me and I reply with the Spanish word, she’ll say “No Mami, yellow”. I respond by saying “En ingles se dice yellow, y en espanol se dice amarillo”. Is that the correct way to practice language awareness?

Hmm…Im not entirely sure what validates “correct” in developing metalinguistic awareness….thats kind of what I am researching. I think the way you approach it as far as tone in your language for example has something to do with it. I am doing the same thing you are….just saying to my nena “si. asi se dice en ingles pero tambien tiene otro nombre en espanol”—-I guess we will all learn together.

This post is so true! I feel very identified with it. My dauther who was at home with either me or my husband until her 2nd birthday has been attending a all english day care for the past 7 months. In the beggining she was very shy and quiet because she did not understand english. The past 3-4 months we’ve seen how the english language has basically “exploded” in her, and now she comunicates more and more with her teachers and classmates in english very effectively.
At home she now blends both of them most times and she will ise phrases like this : “Mama, where is la pelota?”. She will sometimes say a phrase only in english, asnd when I correct her she would persist in saying it. Tha last few week I’ve resorted to trying to repeat the phrase in spanish and explaining that though they mean the same thing, we use spanish at home and english at school. She is 2 and 7 months so I don’t know how and if she understands this difference at all. But at least I’ve noticed her using more spanish at home the past few days. I don’t know at what point she can make that clear distinction that we speak spanish at home only, if she knows that me and my husband understand and speak english, so we can’t really pretend we don’t understand what she says. Also I’ve noticed that when she spends the whole weekend with us, by monday her use of english is minimum. But come friday her use of spanish has decreased sigificantly.
We’va recently been really trying to look for more and more spanish exposure with music and videos, trying to limit to the minumum english movies or videos at home.
I really hope we can really achieve this bilingual awareness, and our goal of having a complete bilingual child!

I love that our daughters are about the same age! Mine is 2 and 8 months and is doing the same thing with English and Spanish. She started english immersion in Jan so the English is still flourishing. Its nice to know that after the weekend of spanish your nena uses more spanish. Itll be interesting to see what happens with my baby girl. That being said, we are worried about her refusing to speak Spanish so we are thinking of switching her to a spanish school this fall. One we really like actually but that decision is still up in the air. Until then we will focus our efforts in teaching her about what it means to be bilingual. Suerte!

Hi Suzanne,
Thanks for your reply. In the area we live there are no bilingual schools, so she is in an all English day care, and eventually will go to an all English pre-school. Her teacher are really great, and they try to use some Spanish words with her, but at the end of the day, she spends 8 hours there where the bulk of the conversations will be in English.
So, we will keep on trying, and looking for new ways to keep the Spanish alive at home

When our son was younger he did this as well and our response was very similar to what everyone here has expressed, by simply tell him that “In English you say red, but en Espanol decimos rojo” or whatever the word might have been. Now that he is older (3 1/2) in a bilingual immersion program and his vocabulary in both English and Spanish is sufficient that we rarely have those mix-ups with nouns. Verbs have become the issue. He seems to try and conjugate English verbs in Spanish forms, this makes me giggle and my husband cringe. The same approach is becoming less effective, as the complexity of his constructions increases and the languages looses parallels, if that makes sense. We seem to ride this line between Anglicisms in Spanish and similar issues with reversing phases and inserting Spanglish in English, which is frustrating, especially for my husband who grew up in a family where anything less than the most proper Castilian Spanish was severely chastised. How are others correcting this issue with your bilingual kids?

Leave a Reply to Ana S