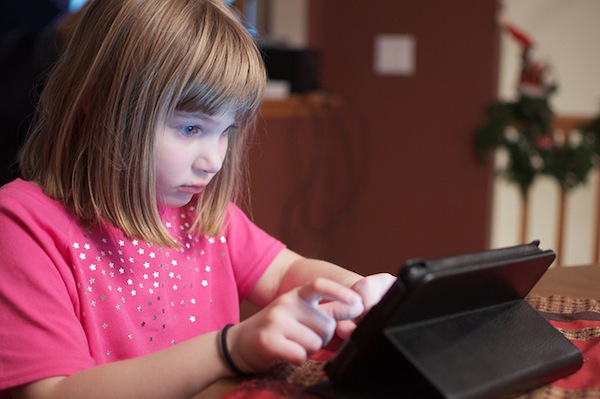 Last week, I wrote a post about some of the things I’ve done to ensure my daughter Vanessa loves reading in Spanish. One of those things is leading by example. But since I read a lot more eBooks than regular books these days, I figured the time had come to show Vanessa what I’m doing every time she sees me with my Kindle.

I mean, I think she had an idea because I might have shown it to her before, but last week I decided to download a sample of one of the chapter book’s she’s hooked on and I let her play with it after I explained how to use it. She was enthralled and kind of disappointed when she was done with the short sample. She wanted more.

So I wasn’t surprised at all with the results of Scholastic’s most recent Kids and Family Reading Report. In its fourth edition, the national survey explores kids’ (ages 6-17) and their parents’ views on reading in the digital age and what influences impact kids’ reading.

Among the key findings, Scholastic revealed that the percentage of kids reading eBooks has nearly doubled since 2010 (from 25% to 46%) and that those who read them are reading a lot more — especially boys who tend to be more reluctant readers.

Since I’m all for anything that will get kids reading more — and because Vanessa showed such an interest in the sample I downloaded to my Kindle — I decided to go searching for eBook in Spanish for children… and I must say I was pleasantly surprised with my findings.

First of all, you should know I went through Tienda Kindle, which Amazon launched last year with over 30,000 titles in Spanish, and I chose the category infantil & juvenil. I didn’t really have a specific title I was looking for, so I just kind of browsed to see what I found.

The majority of the classics are 99 cents. There are a lot of translations, but there’s also a nice selection of books from the well-known publishing house Alfaguara Infantil.

Check out my finds:

Vanessa already started reading the first book on the list and she seems to be enjoying it. The best part is that now I have these books with me at all times, so she’ll never get bored.

Getting my Husband to Speak More Spanish to Our Kids

Tienda Kindle: 30,000 eBooks in Spanish!
How I Got My Bilingual Daughter to Love Reading in Spanish
Rediscovering the Power of Reading
4 Comments

I would like to teach my children to read in spanish and I made a big mistake with my oldest son. He is now 13 years old and his spanish is horrible. When he was little he knew both languages and I did not wanted him to strugle with English in school so I started speaking and reading only in English. Now I made the rule at home that we can only speak spanish and unconciously I end up speaking English with my children again. Now I want to start my 5 year old to read and speak in spanish and she tries very hard. Since she is starting to read and learning the sounds of letters in English, Don’t you think she will be confused if I introduce her to learning sounds of letters in spanish. I don’t want to make the same mistake I did with my oldest son. What do you think?

Jenny my son was hearing Spanish about 90% of the time until his Tía who was caring for him while I worked moved back to México and he went to an English-only preschool for about a year. At that same time, although at home we still spoke to him mostly in Spanish), I did sing him little alphabet songs & counting songs in English, which I do not know in Spanish. When he started school this year he was already reading a number of words in English but in Spanish he was very weak in the alphabet, counting, etc. But the school this year is a dual-language immersion school, teaching all subjects in English and Spanish equally. He caught up in Spanish within literally a few weeks. I really think when they learn to read, the big part is not really about learning the letters, it’s learning how reading works, the concept that these squiggles build words. Then once they understand that, memorizing the various sounds of the letters goes quickly. I say that because my older daughter (living entirely in English) knew the alphabet and all the letter sounds when she was 2 — but she didn’t read at all until she was 4. My son was 4 before he really started knowing any of his alphabet, and he learned it almost all in English at preschool, but when they gave him the information in Spanish at school this year, he came right up to speed immediately.

Thanks for the info Roxana! I have bought a few e-books in Spanish but did not think to search by “juvenil” and I will definitely also check out these titles you list. As a non-native speaker I find that in Spanish, my reading level is right now not far from that of my 11-year-old stepdaughter’ who spoke only Spanish until she was 6. We can even enjoy some of the same books. Yajaira seems to actually groove on reading on the Kindle or on my phone (Kindle app) a bit more than a regular book. It’s a challenge to entice her to read for pleasure, and anything with buttons seems to have a magical attraction and cool factor with the younger crowd. I like that it ends up cheaper (since my mom gave me the kindle for Christmas, I’m only buying the books) so I can splurge on purchasing more books she herself selects. It’s also great as you point out to have it always available. When we go to an indoor play area she is too tall to be allowed to play alongside her younger brothers and is condemmed to waiting on the benches with the adults. She feels (and looks, alas!) quite grown-up sitting there with a Kindle.

Tks for the recommendations. I will pass these along to my sisters, who actually have kids.