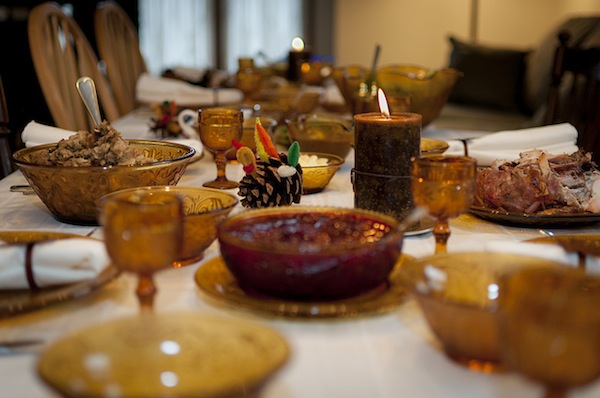 Thanksgiving — the date in November — has never meant much to me. When I was growing up, I was in Costa Rica, and the fourth Thursday in November was just another day. My brother and I were busy with school, my parents with work. My American father would usually make a casual comment in reference to the day, and I had memories of spending Thanksgivings past with his family in California when I was very little, but that was about it.

Thanksgiving as an event, however, is a completely different story. Because my father absolutely loved Thanksgiving. And every so often he would proclaim, out of the blue, “Hey, let’s have Thanksgiving!!” Sometimes we would actually celebrate on a weekend in November. Sometimes in March. Sometimes several times a year. Really, whenever my father felt like it.

With that phrase, we were all in and Thanksgiving was ON. Our very first Thanksgiving was shortly after we moved to Costa Rica, in honor of my American grandparents’ visit. Turkeys were remarkably hard to come by in Costa Rica in the early eighties, however. I remember driving all over the Valle Central with my grandfather and my dad, who had a lead on where to find a turkey. According to my mother, after two days all we found were a few scrawny chompipes, and the farmer was unwilling to sell them, anyway. She doesn’t remember whether we ended up having chicken or canned ham that Thanksgiving, but it definitely wasn’t turkey. Later in the decade a gourmet butcher’s shop that catered to the small but growing expat community opened in the ritzy part of town. They had turkeys, but they were so expensive that my father would buy one and ask the butcher to saw it in half — one for Thanksgiving now, one to freeze for Thanksgiving later. The butcher thought he was crazy.

My Costa Rican mother cooked a mean Thanksgiving dinner. She had lived in the U.S. with my father for a few years and had learned everything she knew from my Grandma Stevens. She had a Thanksgiving notebook where she had written down her recipes for the turkey, stuffing, and gravy, all of the traditional family recipes that had been passed down. When we had visitors from the U.S. (and there weren’t that many of them in those days) they were always asked to bring us one or two cans of cranberry sauce, which was impossible to find. If we were lucky, they had room in their suitcases for a couple of cans of cherry pie filling, too. And there were no pumpkins to be had in Costa Rica, but my father, a baker, experimented with several kinds of squash until he found the one that made the best pie.

And when word got out that we’d be having Thanksgiving, my Costa Rican relatives came in droves. There are stories of my Abuelito fasting the entire day before our Thanksgiving dinner, he loved it so much. My mother’s family is huge and it’s a small country, so there was no travel, no stress, no plane tickets to be bought, no drama. Just good food, and family that was more than willing to rally at a moment’s notice to indulge my father and his American ways whenever he felt like celebrating.

My father is gone now, and the Thanksgiving dinner torch has now been passed, but not to me. Fittingly, it now belongs to my brother’s Costa Rican wife. I was there for her first cena de pavo and watched as my sister-in-law carefully copied down the recipes from my mother’s trusty notebook in Spanish for herself, and my mother spent two days walking her through it. Now her Thanksgiving dinners, exactly like those my grandmother used to prepare, are as renowned among our blended family as my father’s dinners used to be. The only difference is that unlike my father, she can easily pick up a frozen turkey at a store nearby.

My father taught me that you can have Thanksgiving whenever you feel like it. Nowadays, when November rolls around, I feel like I’m exempt from the expectation of making big plans or traveling, and fortunately, my husband feels the same way. We’ve started our own tradition of just celebrating Thanksgiving right here at home, and we invite anyone else who’s staying in town to join us. Our Thanksgiving has become a casual gathering of friends, neighbors, colleagues from work. Some faces are constant, some change every year. My only contribution to dinner is the homemade cranberry sauce and a sweet potato pie.  There are no traditional recipes — my husband, the chef, experiments with new recipes every year.

I’ve told my husband the story of my father’s Costa Rican Thanksgivings many times, and he likes the idea. And I think that maybe sometime in the spring, I could say, “Hey, let’s have Thanksgiving.” And he just might go for it.

Why Raising a Bilingual Child is Always a Work In Progress

I loved your article. As I read I thought it was awesome to be spontaneous and have Thanksgiving at different times during the year. And I have had the experience while living abroad of searching for the ingredients. What a nice memory to have of your dad.

I love the idea of having Thanksgiving on any given day. The truth is that although this American holiday has never been really one of those I look forward to, the older I get, the more I realize how much I like and appreciate the concept of being grateful for everything we have and everything we are… as opposed to being worried about how much money I spent and whether or not my gifts will be liked…

Happy Thanksgiving, Kim! And thanks for sharing this family story!

Leave a Reply to Roxana A. Soto