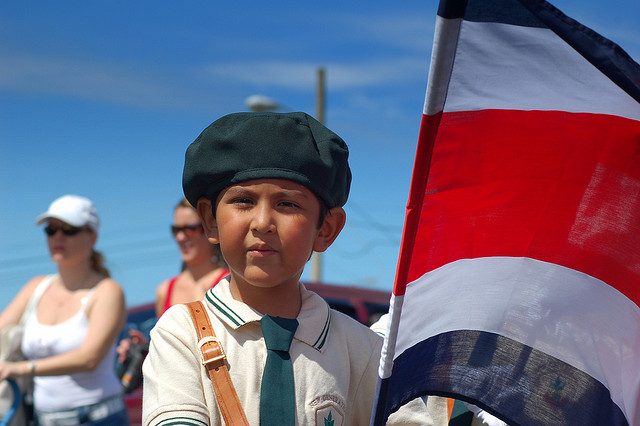 Almost a month has passed since el quince de septiembre, Costa Rican Independence day. That weekend I set up a meeting point with a good friend, also a tica, gathered up my sons and our Metro cards and we trekked up to the Costa Rican Embassy in Washington, D.C. to check out the festivities, the third year in a row we’ve done so.

I can always bribe my children with a ride on the bus or the Metro, because there are few things they love as much as taking the Metro somewhere. So they were excited to go this year…but not as excited to stay. The embassy isn’t really big enough to accommodate the crowd that gathers every year. There were tons of people and no room to walk around. The music was loud. The line for the food was unbelievably long. For my two autistic boys, it was simply too much. Secondo spent most of the time we were in line humming to himself loudly in order to block out the noise. Primo dealt with it by occasionally sprawling out on the ground and staying there — and I let him.  We got our food, and I got my much-needed Imperial beer. We stayed long enough to sing the himno nacional and then headed back home.

I have many memories of my parents going to great lengths to make U.S. culture, history and politics come alive for my brother and me when we lived in Costa Rica back in the eighties. We often spent the Fourth of July at the U.S. Embassy, where we sang “The Star-Spangled Banner,” ate hot dogs and ran sack races. We all got to break the No-TV-During-Dinner rule and watch CNN if a major story was breaking. My father — a staunch Democrat — dragged us out of school and took us to the embassy so that we could hear both George H. W. Bush and Dan Quayle speak on official visits, because there was no way we were going to pass up the opportunity to hear the President and Vice President speak.

I’ve always dreamed about doing similar things with my boys. We are lucky to live in an area with such a wealth of cultures, where embassies hold all kinds of events and it seems like a festival is going on every weekend. And while I knew that doing these things would not be feasible at first, with two babies and a bulky double stroller, I looked forward to the day when we could do them.

Once the double stroller and diapers were history, we started going places…with mixed results. An afternoon at the Museum of Natural History ended with an epic meltdown within minutes of our arrival, so we played outside instead. And now the meltdowns are fewer because Primo and Secondo are increasingly able to express themselves more articulately. I recently showed Secondo a flyer advertising a Hispanic Heritage Month event. Music! Dancing! Typical foods! it proclaimed. Secondo looked at it for a moment. “No quiero ir,” he told me.  “There will be too many people and it will be too noisy.” I was shocked — for years I’ve struggled to guess what he’s thinking and what he wants, and this time his wishes were crystal clear. I’ve longed for communication like this more than just about anything. Needless to say, I respected his wishes. We bagged the Hispanic Heritage Month Festival.

I hope as they get older they will find these events more enjoyable. They may or may not. As for the embassy next year, although there was something I loved about singing the himno nacional together, I’ve decided we won’t go if they don’t want to. But I will dig out my old copy of Lo que se canta en Costa Rica and maybe we can learn the himno at home.

Words on Wednesday and more on SpanglishBabyPlayground!

Disney Junior’s Sofia the First Is Supposed To Be Latina? Why I’m not buying it

Reflections On Citizenship
What the Power of Family Can Do for Bilingualism
Summer Trip to Costa Rica: The Best Way to Experience Culture & Family
15 Comments

Do you have any video of that? I’d want to find out some additional information.

My web page: how to settle irs tax debt –
Abraham -

If some one wishes to be updated with newest technologies afterward he must be pay a visit this web
site and be up to date every day.

I am in fact glad to glance at this weblog posts which consists of tons of valuable data, thanks for providing these data.

Let’s return a and a must-buy if you’re applying an iPhone
5 or sooner. It backs quicker up, and it arrives to $839.

Excellent post. I was checking constantly this blog
and I’m impressed! Very useful info specially the last part :
) I care for such info much. I was looking for this particular information for a long time.
Thank you and best of luck.

Find at least 5 things you like about your appearance.

Polyester is often blended with other yarns to create wonderful fabrics that mix
the benefits of both textiles, like dressy uniform fabrics and professional wear.
This must be the case of the beautiful Cheryl Cole.

It gets me to take more pictures.

fantastic points altogether, you just won a logo new reader.
What could you recommend in regards to your publish that you simply
made some days ago? Any sure?

Also, try getting one piece of white flannel and immerse it in warm Castor oil.
You might think you are relaxing muscles when you sit and slouch; however, bad posture makes your muscles work harder.

In more severe cases there could also be tendon damage as in torn tendons which connect your
muscle to your bone.

What’s up, jjst wanted to tell you, I likked
this blog post. It was inspiring. Keep on posting!

If you wouhld like to take a great deal frrom this article then you have to apply these methods to
your won website.

For the best detailed explanation please have a look at this amazing site :: diabazole (Antoinette)

It’s hard to find knowledgeable people about this subject, but you seem like you know what you’re talking about!
Thanks

t look right when your wedding theme is really a glamorous 1930.

To find out aabout planning the wedding visit Suzanne’s Wedding website and
her Wedding Planning blog -. This rule faddes of the question at cake cutting time.